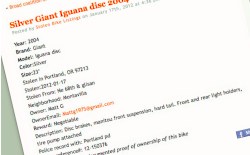 Reader Matt G. emailed us a few days ago to share an interesting experience. Matt got his bike stolen back in January and, like a smart and responsible Portlander, he immediately reported it to the police and listed it on our Stolen Bike Listings. A few months passed, then he got an email from what he assumed was a Good Samaritan.

“This morning I was contacted by someone saying they may have found it and could I provide the serial number. I was surprised and a little excited that it could be mine and responded right away, giving them more details on the bike but informing them that sadly, I didn’t have the serial number.

I didn’t think too much of it initially, but later it crossed my mind that it could have been the thief checking to see if the bike could be traced and proven stolen. Since a lot of thieves sell on Craigslist it’s always the first place a victim will look to see if their property is up for sale. So, I wonder if these thieves are now using the BikePortland Stolen Bike Listings to help them move their stolen bikes?

After that thought crossed my mind I did a bit of digging on the potential Good Samaritan/thief… and he has to be on first name terms with the police, seeing as his mugshot is all over the web for everything including theft, fraud, assault etc… I know that history doesn’t mean this guy can’t be a reformed man; but it set me off to where I am now. No response back from him as yet and I don’t expect to get one at this point, I guess I’m suspicious by nature.

Long story short, I think the thief has contacted me and I’m wondering if you’ve heard of thieves using the listings to contact people they’ve stolen from before?”

I couldn’t recall ever hearing about a thief contacting their victim, so I asked our resident bike theft expert Bryan Hance. Bryan said, “It happens from time to time.” He even recalls people using such contact to steal their own bikes back from thieves. “But I don’t recommend that,” he added.

Bryan’s suggestion if this happens to you is to contact the police right away. Hopefully you’ve got a pending case number on file. And hopefully, of course, you actually know your serial number.

That’s a lesson Matt G. now knows all too well. “If it turns out what I think is true [that the guy who contacted him really is the thief], I don’t see it as a slight on the stolen bikes listings at all… and really, I should have had that serial number written down.”

I use serial numbers on CL to verify that a bike *isn’t* stolen. I ask upfront, and if they won’t provide a SN or don’t know the SN? No talky.

I then run the SN online databases. If not stolen, then I will visit.

When I get there, I check the SN given on the phone to the SN on the bike. No matchy? No sale.

Of course this isn’t fool proof, but it keeps me from purchasing an obviously stolen bike.

And of course, if you DO have the serial number written down, DO NOT TELL IT to anyone who calls you, even if they say they’re the police. If they do, say you’ll call them back at the actual police number.

Can you explain why it’s bad to give out the serial number? I mean if a thief has your bike s/he also know the S/N. So what’s the issue?

Most thieves will think they are pretty smart by using an anonymous email address from Yahoo or GMail, but it actually makes it easy to find the IP Adress. http://aruljohn.com/info/howtofindipaddress/

Wait, those 2 comments seem to be in conflict to me. If I have put my serial number in online databases as a stolen bike so that someone like velvetackbar doesn’t buy my stolen bike, then what’s the big deal about telling someone the serial number over the phone? I mean, it’s out there so I’m not seeing why saying it over the phone is a problem even if it is the thief contacting me.

I’d just like to learn here, not trying to be antagonistic.

it sounds more like somebody bought a bike for cheap, checked the stolen listings to see if it was hot, spotted one without a serial # listed, and contacted the victim to see if maybe they had found the serial # since then and they had actually bought the stolen bike…

but then again, thieves generally aren’t the smartest…

I wonder about that, too, KYouell. Maybe the stranger is trying to socially engineer the serial number so that they can claim the bike from an unknown third party. Write down the serial number and don’t show it to them until they show you the bike.

For every new bike I buy I immediately take pictures of the serial number of the bike with some other personally identifiable info (ODL or purchase receipt) and post it to my Evernote account so I have access to it from anywhere.

Paul in the 'couv
Reply to  John Lascurettes

I regularly take recent picture of my “dialy riders” with my cell phone and keep old photo’s of the SN there so I have them handy if either the bike is stolen or if I lose my key and need to “steal” my own bike I can prove it is mine or is someone runs there chain through my frame on a crowded bike rack.

My receipts have the serial number written on them. I think that’s standard. If it’s not there, write it on yourself and keep the receipt as long as you own the bike. Treat it like a car title. Posting a picture of the receipt to Evernote or something similar is a good idea.

I think the lesson here is…. write your f-ing serial number down!

Don’t do it in half an hour.

Don’t do it tomorrow.

Don’t do it next weekend.

Get off your lazy ass, stop wasting time on the internet, walk over to your bike, and write it down NOW!! (Or even better, email it to yourself).

By the way, has anyone heard about this trick thieves use?

I just read in the Alameda nghbrhd newsletter that thieves have been locking stolen bikes to sign posts in the nghbrhd and then advertising the bike for sale (can’t remember where they advertise it) and have buyers come to the address of the home the sign pole is in front of, pretending they live in that house.

Sounds about right. I know there have been a bunch of them caught ‘stashing’ bikes all around town in various bike parking spots before – and then they meet the seller there at the particular rack when they want to sell it. Which is why it’s always worth keeping your eyes open … you may just run across your own bike locked up somewhere downtown.

There is a 2007 or 2008 Jamis Aurora (copper & cream) locked up right now to the street sign at NE Siskiyou St. and 24th Ave in Alameda/Irvington. I saw it on my way to work this a.m. It wasn’t there yesterday morning.