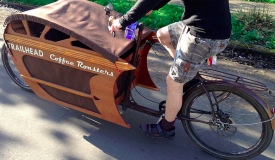 In the past I’ve documented Portland’s strong and rich connection between coffee and bikes. I’ve also shared how this city is absolutely bonkers for cargo bikes in all of their many manifestations. Well, it turns out that those two trends are continuing to push local coffee and bike lovers to new heights.

Aspiring entrepreneur and Portland resident Jake Rueda just completed a successful Kickstarter campaign for PourPour Coffee. Now he’ll take the money he raised ($5,000) and put it toward, “a modern brew-to-order coffee cart on a tricycle.” I have a feeling we’ll be seeing and hearing a lot more from Jake this coming summer. He hopes to open in mid-May. Watch for updates on his website.

Portland businessman Ryan Hashagen has done it again. After establishing his Portland Pedicabs business and a fleet of ice-cream-selling tricycles, he is now offering a cargo trike built specifically to serve high quality espresso. Behold… 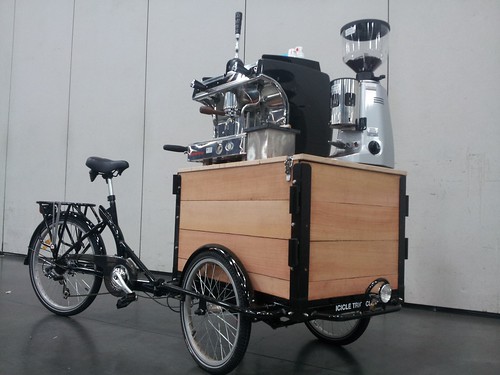 Ryan says the new rig debuted at the recent Specialty Coffee Association of America Convention held here in Portland last weekend. Ryan built up the bike in his shop in Old Town with a lot of help from another local coffee bike guru, Charlie Wicker of Trailhead Coffee Roasters (more on him below). Ryan said the bike wouldn’t have been possible without Charlie’s knowledge and inspiration. 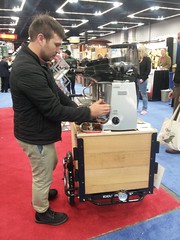 Ryan also said it was hard to find a quality espresso maker that could run off of basic 110 volt power (which can use any standard household outlet). After a search he found a machine from Italian company Astoria and collaborated with them on the project. His Espresso Coffee Bike comes with an Astoria AL1 espresso maker that can run off either propane or 110V power. “The beauty of that is we can either plug it into a hotel lobby or take it to the beach or a park where you might not have electricity,” he says.

Ryan’s Espresso Coffee Bike retails for $9,999 for a complete package that includes water tanks (one for fresh water, one for waste water), a refrigeration unit for milk and cream, a propane tank, and a professional-grade bean grinder (that can run up to 8 hours per charge). He’s already sold one to a customer in Bogota, Colombia and more orders are piling up.

When we introduced you to local coffee roaster Charlie Wicker three years ago, he ran his Trailhead Coffee Roasting business from an Xtracycle longtail. Then he upgraded his bike a locally made Metrofiets cargo bike with a custom wooden box. Yesterday I ran into Charlie on a delivery and saw the maiden voyage of his latest creation… 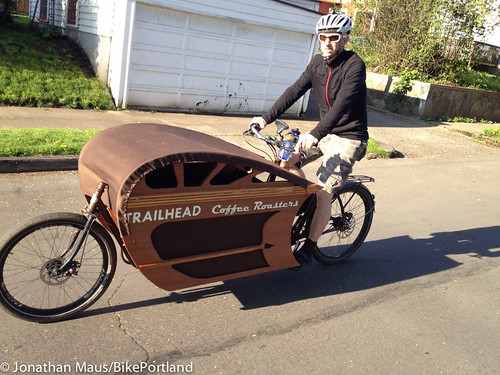 Charlie has really outdone himself this time. The new box is beautiful, with a design inspired by 1950s art deco trains. The box also has inlaid lighting (like a big rig) and sides tall enough so that Charlie’s kids have windows when the ride inside it (the bike doubles as his family car). It’s not light, but Charlie is not weak — he pedaled his previous coffee bike on Cycle Oregon (which is either extreme dedication or insanity, or both)!

These coffee bikes (I like to call them “coffiets”) stand on the shoulders of early innovators like Courier Coffee (2007) and Cafe Velo (2008). Where will this coffee and bike connection take us next? Stay tuned…

In other local cargo bike news…

— TRANSPORTland, a fledgling cargo bike advocacy and enthusiasts group, has earned a spot in the Rose Festival Starlight Parade (June 2nd). They’re currently working on a routine and their entry will include many local bike-based businesses.

— Local cargo bike maker Metrofiets is well known for their custom projects (the Hopworks beer bike might ring a bell); but they’ve also been busy refining production processes in order to bring prices down and improve turnaround times. Evidence of this is the announcement yesterday by Clever Cycles that they will receive a shipment of Metrofiets cargo bikes in the next couple of weeks. The bikes will be a production version of Metrofiets’ proven design.

— Spendid Cycles, a cargo bike specialty shop on SE Belmont is nearing their third anniversary. The shop is about to launch a new online store and they report a healthy business in adding e-assist to the bikes they sell.

— Go By Bike, the small shop based under the Aerial Tram in the South Waterfront district is booming. One of the new services they’ve debuted this season is free rental (for OHSU staff and students) of a CETMA cargo bike. (Stay tuned for more on Go By Bike.)

— Portland-based bag maker Blaq Design is finding a healthy market for their cargo bike rain covers. Blaq is making them for Southeast Portland shop Joe Bike and for CETMA, a cargo bike maker based in Eugene.

— BLine PDX, a local freight delivery company that uses pedal-powered trikes (with e-assist) plays a starring role in an excellent feature that ran on PBS on Earth Day. The show, Earth, the Operator’s Manual focused on Portland’s planning leadership that has allowed us to take far fewer motor vehicle trips than other growing cities. Watch the clip below:

As this post makes clear, Portland’s cargo bike ecosystem is thriving! The level of collaboration between enthusiasts and business owners is creating something very special that is having an impact on our city both in terms of healthy lives and healthy bottom lines.

Okay, that Icicle Tricycle – how does the operator see where he’s going?

So what do quality espresso makers usually run off of, 220? I can’t imagine many kitchens wired for that (other than for the stove).

Commercial espresso pulls a lot of amperage typically. So 220v is common. There’s a universe of espresso called “prosumer” which will produce close to cafe-level espresso but at lower volumes. Those machines are designed to run off standard household circuits. His cart is designed for high volume event brewing.

Wow – I had no idea about the draw. Thanks for the education.

Most Espresso machines and commercial coffee brewers run on 220v. I used to do coffee equipment installs. Also there are several 120v 1 group espresso machines that are commercial quality. The only issue is that they can “crash” when steaming lots of milk, because they don’t build heat and pressure as fast as a 220v powered machine.

Man those are way cool. I cant wait until there’s some sort of “cargo-bike share” or something.

As for the video. well, okay. I’m waiting for the moment when talking about how safe the streets are for all users takes as much precedence as talking up how “green’ the city is. I guess we’ll have to wait for a the “safety-wash movement”.

Hooray for Charlie! He’s not only leading the way in coffee roasting, he’s leading other coffee roasters into the world of cargo bikes AND helping them with mobile brewing. I love his community spirit!

Jonathan, you’re so right about the collaboration and the ecomonic benefits. In many cases that collaboration is developing an agglomeration economy that consists of: retailers, bike builders, wholesalers, accessory fabricators, and street vendors. All supporting and relying on each other to build a more livable city and a healthy local economy. We’ve seen it happen more broadly with bicycles in general but it’s also happening in Portland specifically with cargo bikes. Your recent article about City Club studying bicycles is timely and I hope that they take a look at this aspect of the bicycle and cargo bicycle community.

Ryan also makes a beautiful cargo bike that is half bullit and half bakfeit cargo bike. I bet there is more profit in the cafe cargo bike though.

Below is the picture URL

Ryan is at http://www.portlandpedals.com I see him all over town and he’s super friendly.

The cargo scene is exploding! Yea. I think the missing link in Portland are more supports for low income bike members of our community. I really need a helmet, uLock and lights for a neighbor and I can’t find any help.

Thanks for the shout out. Great article. Portland and bike businesses are a nice fit, I look forward to brewing coffee for all the fine citizens of Portland.

Oh yah, one typo! My last name is Rueda
Thanks.

Actually, what I was hoping to see was a cargo bike parking cover. My block doesn’t have a corral, but plenty of it is used as personal storage space for shipping containers, junk cars, and dirt/mulch instead of transient parking.

What better place to keep a cumbersome cargo bike?

What make and model do you ride? Sounds like something we could figure out, and we’ll need one for our shop cargo bike too… Awesome idea!