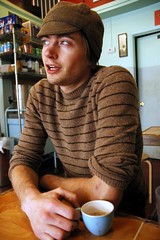 In Portland, there’s an undeniable link between coffee and bicycles.

We’ve got Stumptown and their involvement with Bikes to Rwanda and Nossa Familia, who can be found pulling shots at events ranging from track racing at Alpenrose Velodrome to Cycle Oregon.

And now there’s Courier Coffee and its wide-eyed owner, 26 year-old Joel Domreis. I caught up with Joel the other day to find out more about his budding business.

Joel has been drinking and thinking about coffee for most of his life. A native Portlander, he grew up in downtown coffee shops. In elementary school, he and friends would hop on the bus or their bikes and search for coffee places that would keep their cups full,

“Back then, it was all about getting cheap coffee and free refills. Coffee shops were just something to do…they were cheap and easy to hang out in.”

But Joel’s love of coffee went far beyond just hanging out. He started to think he’d like to own a coffee shop some day and his interest in coffee grew. As a college student at University of Oregon (in Eugene), he would buy quarter-pound bags of specialty beans.

After college, Joel moved back to Portland and worked at several different coffee shops and bakeries. Two years ago, he was in between jobs and started roasting beans in his own back yard, 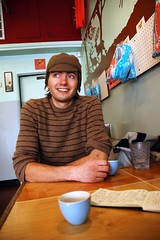 Soon, he started bringing samples to his friends at downtown cafe, Half & Half. They described Joel in a post on their blog,

“He has a crazy-manic energy…He has been coming in for years, ordering double espressos and talking incessantly about roasting. Eventually he started bringing samples, little jelly jars meticulously labeled with dates, times and temperatures, and we witnessed his coffees become magnificent.”

Eventually Half & Half become an official client (as did their sister restaurant Acorn) and Joel also won over the tastebuds of posh Pearl District restaurant Olea.

To serve his clients, he makes daily loops on his bike, riding between his roastery near 40th and Hawthorne and downtown. He’s fanatical about freshness and usually sets out on his first deliveries of the day by 4:00am. He says,

“The goal is to get the coffee there before people wake up, or before they arrive.”

As his business grows, so does the load in the homemade messenger bag he delivers his coffee with. He says it can hold 35 pounds of beans, but with his growing clientèle, he’s ordered a new cargo bike from his friends at the Center for Appropriate Transport in Eugene.

Judging from the flavor of the espresso I had at Half & Half, his knowledge of Portland’s coffee scene, and his obvious passion for roasting, I think a new cargo bike is a very wise investment.

For more on Joel Domreis and Courier Coffee:

Great story, Jonathan! Are there any shops that exclusively sell Courier Coffee?

It doesn’t sound like his production is to that level yet, but maybe in the future?

I’ve been enjoying Joel’s coffee at Half and Half for a while now. I just want to know, can I call him and have him deliver to my house by bike? That would be the COOLEST.

Here’s a nice blog post from Half and Half about why they changed from Stumptown to Courier.

p.s. Scott, you can buy Courier Coffee beans at Half and Half (and presumably Acorn Cafe but I haven’t been there yet).

Great story – I really enjoy reading about folks that integrate bikes into their lives like this.

thanks, freddy. I’ll have to stop by Hald and Half and check it out.

This is SO quintessentially Portland, that i almost can’t handle it: it’s too charming!!! No really, my heart is BURSTING!

Earnestness, coffee, bikes…it’s us! But the best part, the crema on this report, is found in the H&H blog where someone comments that they hope he doesn’t get a flat…. Ooohhhh, seriously, i need to walk away from the screen now, because I’m dying from the cute majesty of it all…..!!!

He does deliver. I find a freshly roasted pound sitting on my doorstep in a Mason Jar every Monday morning.

Joel, our family goes through about a pound a week.

I’d be happy to pay a bit of a premium for whole-beans outside our NoPo front door one morning out of every seven.

It’d be like the porch delivery of dairy that I grew up on, but without all that lactose…

FYI, Acorn just opened up. They are in the Pearl District at 539 NW 13th Ave. I work in the building and will definitely be buying more coffee from them after reading this story.

There is also a local guy delivering by bike candy, etc. that he makes. I have bought it over at the food co-op on Alberta. Good stuff sorry I cannot remember the name.

A couple years ago I bought a tandem recumbent from a fellow in Corvallis, OR whose company did a very similar thing on a larger scale, with all deliveries by bike! A couple of his delivery bikes were truly industrial strength; capable of hauling in upwards of 300 pounds of coffee!

I just wish I could remember the name of his company…

You may want to consider asking Jan to add a fabric cargo container to your CAT freight bike – to lighten the empty load and protect your goods.

Jan made one for us at the City of Vancouver. Call me if you want to chcek it out.

AAAhhhhh…how nice to have freshly roasted coffee beans delivered to your front door. I will have to get down to one of those cafes and try this coffee!

Ok, I’m mildly gleeful now. I may be more of a tea person, but I still love my coffee. I’m definently going to keep an eye out for shops that carry courier.

I am drinking a cup of courier coffee right now, and it’s delicious (and the bag is charmingly labeled). Highly recommended!

Joel- I miss you. This is your old friend Lisa from “The Bank”. You are doing wonderful for yoursef, I am so happy! All that coffee talk really paid off……great job. Keep it up. Peace.

so i do deliver to peoples porches, ive got this website and my number is posted there. Ideally id be getting to those that cannot make it to half and half or the Acorn. Hey Alyessa.

We\’ve been happily getting deliveries from Joel for a couple of months now. Thanks, Joel!

Recent interview and photos of his new cargo bike here. Sounds like he was also in Willy Week\’s best of Portland issue?

like the article, but i find it a little preposterous that joel and friends were biking and busing to coffee shops in elementary school. in portland that\’s K-5 grades. maybe you meant middle school or high school? anyway, great article. i\’d love to know if there are different roasts and what the home delivery prices are. i\’ll call joel, but wondering if there\’s set prices and more info that could be available to more people.