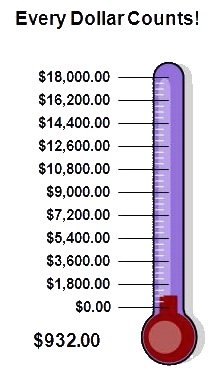 Sunday Parkways needs our help. Yes, the transformative, widely loved, amazing community event that has endeared itself to our city since it first happened in 2008, is getting less love from the City budget these days. That means PBOT and their presenting sponsor Kaiser Permanente are hitting the streets to ask for donations from folks like you and me.

The new, “Every Dollar Counts!” campaign is looking to raise $18,000 by the first Sunday Parkways of the season on May 13. That’s about one dollar for every person expected to attend or about 3.7% of the total budget for all five of this year’s events ($484,000).

Even though events like Sunday Parkways really do pay for themselves and are a smart City investment, this isn’t the first time PBOT has had to ask for donations to keep this event alive. However, with increased scrutiny on the Sunday Parkways budget, it feels much more urgent this time around. As you might recall, there was a dust-up in City Council over the Parkways budget back in January. City Commissioner Dan Saltzman argued that, while he likes the event, it’s not a core mission of PBOT and unless more sponsors step up, “it may need to be scaled back to fewer events.” 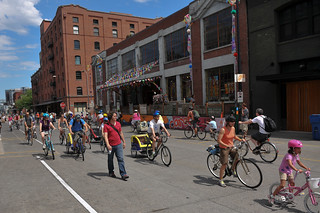 Since the events began in 2008, they’ve relied on the City of Portland for about half of their total funding. This year, the City will kick in only one-third of the costs. The remaining balance will be paid through a mix of sponsors, grants, vendors, and individuals.

So far, sponsors of the event include Kaiser Permanente, Universal Cycles, Portland Parks & Recreation, Metro and the Bike Gallery. If enough individuals step up to join them, we can ensure this year’s five events will be just as awesome as we’ve had in the past.

Check out the new online donation tool at PortlandSundayParkways.org.

We should not only fully fund Sunday Parkways, but we should expand it.
If anyone should be having a fundraiser, it should be the highway expansion project managers.

I can’t believe that Portland has $150,000,000.00 (ONE HUNDRED AND FIFTY MILLION DOLLARS to fund just THE PLANNING phase of the CRC Highway expansion project (A project that does not have ONE neighborhood supporting it-and has so much community opposition) but the city wants to cut funding that goes to Sunday Parkways (A Core Portland Program that PAYS FOR ITSELF)
Benefits attached:

You’ve said this before and I’ve tried to educate you before. Portland has not spent $150,000,000.00 on the planning of the CRC, in fact Portland hasn’t spent a dime on CRC planning. The money all comes from ODOT, which is funded at the state level. Please stop conflating city and state spending priorities.

Grumpy. What is the porportion of monies coming from Metro Portland taxpayers headed to the state?

What you said was that you couldn’t believe that Portland could afford $150 million for the CRC but wants to cut funding from Sunday Parkways. What I’m telling you is that the city pays for Sunday Parkways and the state pays for the CRC. If you don’t think the state is fairly spending your tax dollars then you should be criticizing the state of Oregon’s (and especially ODOT’s) budget priorities, but you need to understand that the argument you made above makes no sense because Sunday Parkways (city money) and the CRC (state money) have nothing to do with each other.

Put simply: ODOT could permanently reduce the CRC budget to $0 and the city of Portland would still have to cut Sunday Parkways.

It does not pay for itself if it needs donors.

Dude, I get that. I did my masters work in transportation policy.

But if you do not have the up front dollars, you don’t get the benefits. Therefore, it does not pay for itself if it needs outside monies. Can you monetize the savings referenced in the article and use it to pay for Parkways? Nope.

It seems that in our present moment it is always easier to raise money than to figure out how to do it more cheaply, or pursue a combination of the two. I will happily contribute $5 or $10 again this year, but I object on principle.

Persuading someone to buy a solar panel is similarly often easier than helping them figure out how not to use the energy equivalent to what the solar panel will produce.
Or throwing it in the recycling bin is easier than not generating the trash in the first place….

I will be donating $5 as soon as I finish this post.

However, a suggestion to those raising funds (and I will be writing to them directly with this suggestion) would be to accept donations via paypal. The fees are typically much cheaper for the organization receiving the money. Plus, a lot of people have a few bucks lingering in their paypal accounts they don’t mind giving away without a whole lot of thought.

It’s too bad this falls outside the scope of Kickstarter. Although then again, if a municipal government with the authority to levy taxes had to resort to something like Kickstarter, it would seem a little end-of-the-world-ish and sad.

It is too bad that the City has to resort to this kind of action, but I believe that as a bicyclist I need to support things like this. So I just donated my $20 and will hope that others also contribute.

When the Oregonian can take less than 0.5% of the PBOT budget and blame bicyclists for not being able to pave streets we need to counter that we pay and are willing to pay. I know that we already contribute more than we get but perceptions by drivers are different.

So please show your support by contributing something. Its a good way to get people interested in bicycling around their neighborhoods.

What percentage of the parkways cost is to police? Where could we get that answer?

Everyone agrees safety is paramount. I don’t think we all agree that such large number of cops are needed. I’ve seen a lot of cops working all day at intersections that had little motor vehicle traffic.

It’s sad that the City has to resort to this, but griping about it isn’t going to help things this year.

I am wondering if a fill the boot sort of thing on the Hawthorne Bridge or at Williams and Broadway would help. Probably would need to put signs up the day before so folks have money handy to toss in the helmet… Anyone interested?

I just gave them $50. How can I, making < $30k, do that when no one else even mentions more than 20? And I'm pretty sure they did this through Kickstarter last year. Probably aren't allowed to "start" the same thing multiple times.

We will have some donation stations on the route. Love the idea of a boot or something to fill up! Thanks for the idea.

I wish that thermometer graphic updated in closer-to-real time, I’d enjoy watching it climb. It shows $932 here, it’s been sitting at $3037 on the Parkways web page since at least before noon yesterday, and I know it’s climbed since then. Anyone have a handy app they could pass along to the Parkways folks?