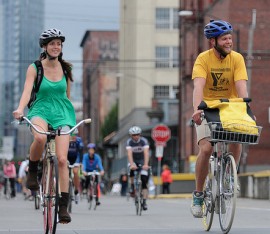 Worth every penny.
(Photo © J. Maus/BikePortland.org)

Ciclovias, the global term for what we call Sunday Parkways here in Portland, are nothing short of a revolution. Started in Latin America in the 1960s and made widely known by Bogota, Colombia, the events have spread like wildfire across North America in the last decade.

But with city budgets being very tight these days, programs like Sunday Parkways aren’t likely to survive the axe. Now, a new study, Do Health Benefits Outweigh the Costs of Mass Recreational Programs? An Economic Analysis of Four Ciclovía Programs, published in the Journal of Urban Health will help make the case that they’re worth the investment.

“The very low per user costs of the Ciclovías in comparison with other programs for physical activity promotion are striking.”

The study analyzed the costs and participation numbers of four ciclovia events: the original Ciclovia in Bogota; the Via RecreActiva in Guadalajara (which I participated in back in 2009); the Medellin Ciclovia; and the Sunday Streets events in San Francisco (which are similar to our Sunday Parkways).

Researchers talked to event managers and organizers to estimate the number of people participating in each event, what type of activities they did during the event, and how long they spent doing them. The goal was to determine how many people at the event could be considered “physically active users” and then plug that number into other data.

In Bogota’s Ciclovia, for instance, the researchers determined that, “the prevalence of physically active adult users” was estimated to be 35.7%.” They defined “physically active” as per the World Health Organization (WHO) which qualifies it as at least 150 minutes of moderate exercise or 75 minutes of vigorous activity per week. (Researchers realized that some people would do physical activity whether they were at the Ciclovia or not, so they asked about that in a follow-up question and then adjusted their numbers accordingly.) 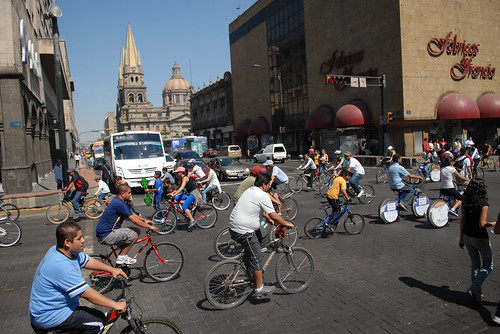 The Via RecreActiva in Guadalajara is very successful.
(Photo © J. Maus/BikePortland.org)

Once they determined the number of physically active participants, they then did a detailed analysis on the cost of each event in order to arrive at a “Total Cost per user.” Researchers looked at both operational costs (truck rentals, first aid kits, traffic cones, and so on) and users costs (the equipment needed to participate in the event like helmets, skates, bikes, and so on).

With that number, researchers determined the direct health benefit (DHB), which they defined as the “amount of money a physically active adult saves in annual direct health and medical costs for preventing chronic diseases.”

They then calculated the cost–benefit ratio by dividing the total direct health benefit derived from each Ciclovía program by the total costs of each program.

The results of all this number-crunching showed that these programs are definitely worth the investment because they reduce health costs and allow people to live longer — and therefore more economically productive — lives.

Taking San Francisco’s Sunday Streets program as an example, the researchers found that with the event’s total annual project cost of $1.7 million (based on 52 events) and an annual cost per capita of $70.50, the projected cost-benefit ratio was 2.32. “This indicated savings in direct medical costs of US $2.3 for every dollar invested in the program if the program occurs regularly every week.” (*Note: The SF event only happens nine times but the researchers based their calculations on a weekly event projection.)

Using a model known as the Health Economic Assessment Tool for Bicycling, where just the people who ride bikes at Sunday Streets are taken into account, the “mean annual benefit for mortality prevention” ranged from $5.1 to $5.8 million.

In conclusion, the researchers say that their results, “support the implementation of this type of program as part of public health efforts to promote PA [physical activity] in urban settings from developed and developing countries.” 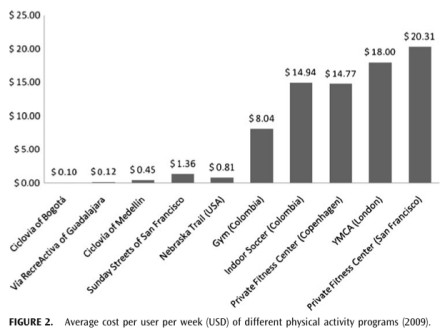 Here’s how the researchers put it (emphasis mine):

“The very low per user costs of the Ciclovías in comparison with other programs for physical activity promotion are striking. Clearly using existing infrastructure built and maintained for motorized transport contributes substantially to the positive cost–benefit ratio. The large number of users, and the potential for an even greater proportion of urban populations to participate in Ciclovías due to the ubiquitous presence of road networks and their relative underutilization during certain hours suggests that with appropriate multisectoral partnerships, political support, and effective management and promotion, many more cities can support Ciclovías on the scale of Bogotá.”

With programs like this under the budget microscope, this study should be a welcome arrival for city staffers and advocates everywhere.

— For more on the study, read the abstract here (it costs $35 to download).

What would it take to make these events free? Get the PPD to volunteer their time? It is already (I thought) run by volunteers? Couldn’t we pull something like this off without *any* money? How hard could it be?

middle of the road guy
Reply to  9watts

My company, Kaiser Permanente, is a major contributor to SundayParkways.

Nothing is really free.

Loved hearing about the roots of ciclovías. Looking forward to Sunday Parkways in 2012!

Seems a little bit of Preaching to the Choir here; might try sending this to The Oregonian as a guest column.

This would be a great reason for Kaiser, Blue Cross, and other insurers in Oregon to fund the events.

It does nothing to improve the budget issues of the city who funds this.

Also how do you compare the health benefits of a weekly event in SF with the benefits of 5 events in Portland?

I thought Kaiser was a major sponsor this last year.

Also, the article stated that the event is not weekly in San Francisco, that it only happens 9 times per year – but that the calculations are done for a 52 week projection.

(*Note: The SF event only happens nine times but the researchers based their calculations on a weekly event projection.)

That makes the numbers even worse.
They are based on fantasy.

I’m afraid I have to agree – they’re assuming that people would participate every week if the events were weekly, and I would bet a large sum of money that very few people would even hit 50% of the events.

middle of the road guy
Reply to  meh

Kaiser is a major sponsor, chucklehead.

But the point I think you are trying to make is that dollars spent on broad public/community health efforts have a larger return than those focused solely on treating individuals.

meh
Reply to  middle of the road guy

Thanks for the civil response (that’s sarcasm by the way).

I was pointing out that the issue is with the funding coming from the City for the event, the city does not benefit from the positive health aspect of the event and therefore will never break even on funding.

Those who benefit the most should read the report and be happy to take on 100% of the funding releasing the city to use the funds to help balance the budget.

It’s that or the event goes away as the money is not available from the city to cover the expense.

Not bad for a chucklehead.

Via RecreActiva is amazing down here. It brings out a wide array of folks and is focused on an active lifestyle instead of car-free streets and food vending like Sunday Parkways. If Kaiser and the likes supported SP and eliminated the need to garner revenue and instead host more activities it could be even more of a health benefit. In every park along the route (and there are plenty) there are dozens of activities for all to enjoy from theatre to dance lessons to hula-hooping and aerobics.

As much as I don’t want to see even more advertising polluting our vision day in and day out, I’d be more than happy to see banners/ads for Kaiser, Emanuel, OHSU, or other organizations if they were offsetting the cost of the event and saving the city money.

Hmm, on average the city requires at least 40 of PPD “finest” to make sure the peace is kept and to help control traffic so no one, or their kids, get ran over. And forget the idea of getting a “flag people” contracting agency involved. Surprisingly one flagger cost more than a single police officer, who do you feel safer with?

9watts, in a lala world putting events like this one could be free and it would be nice..yeah, but in real world things do cost money; like police(and don’t lie and say as a police officer you would donate that whole block of time at a 6-7 hour event), equipment rentals, portapotties, etc.

Oh and “thecowabugnadude” umm…you do know that no one reeks a financial benefit from Sunday Parkways…right? And you say more activities… 8 activity opportunities per park, per event. So I dare say there are lots of things to do, not forgetting the non-activity booths that provide ideas and things to do even after SP is over.

So, here is an idea…why not donate to SP yourselves, instead of complaining about a free service that is provided to you.

PPB’s police officers are typically not trained flaggers. I’d trust the flagger more. Though I think you’re sorely mistaken with how much flaggers make.

And I think you neglect to realize that flaggers are contracted out (raises pricing), as well as unionized (there it goes more), and charge a price varying on the day (Sunday isn’t a common flagger day). Think about these factors.

So that’s why most Oregon flaggers are not union and make minimum wage?

Programs are relatively cheap; infrastructure is more expensive. This is why I think Miller is on the wrong track with worrying about the cost of active transpo-related programs in the PBOT budget.

Time to commit to volunteering as a superhero! Join me and 500 of my closest friends at least twice next year.

I would also like a more equitable distribution of the country’s resources, world peace, a magic pint glass and a unicorn.

Well, even if everyone follows the rules it is a requirement by the city and the PPB that they have officers and the many intersections that are blocked off.

Not anti-event, but justifying the expenses as a health benefit as its sole argument to avoid a fiscal axe just isnt a great argument.

“A key takeaway from this study is that, while previous research has looked at the cost-benefit ratio of bicycling or active transportation — it has done so based on a relatively expensive non-motorized infrastructure investment (like a trail project).”

Not really. Just look at the chart. The cost per user of the Nebraska Trail, at $.81 per users is significantly less than the Sunday Streets of San Fran at $1.36 per user. The infrastructure probably has an even greater benefit as it enables daily physical activity which has much greater benefits than a once a week activity.

The main value of events is that they may encourage more daily physical activity. For the people that events don’t encourage more daily activity, there would be no benefit at all. The success of such events may also help build public and political support for cycling infrastructure.