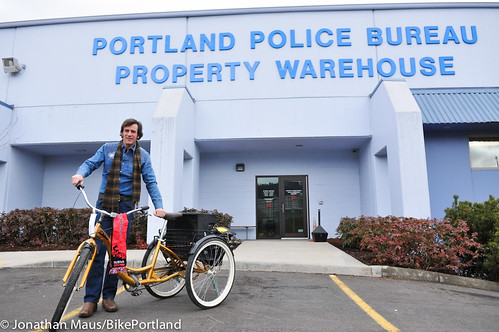 Dan Kaufman and his “Disco Trike” are back together again.

The trike, along with other equipment including an iPod, power inverters, batteries, and gear bags, were confiscated by the Portland Police Bureau during Occupy Portland protests on January 25th.

During those protests, police issued Kaufman a citation for “Unlawful Operation of Sound Producing Equipment.” After having his video camera yanked out of his hand by a Portland Police officer, Kaufman was handcuffed and his trike and other equipment were held as evidence until his scheduled court appearance on February 13th.

It didn’t take long for the issue to get some traction at City Hall, and yesterday, Mayor Sam Adams said the Police would relinquish the trike. I joined Kaufman today for the reunion… 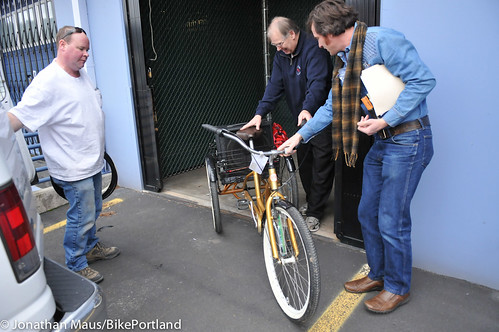 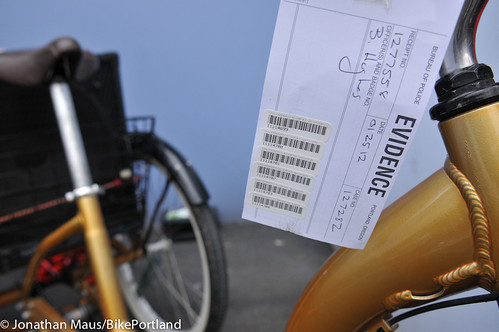 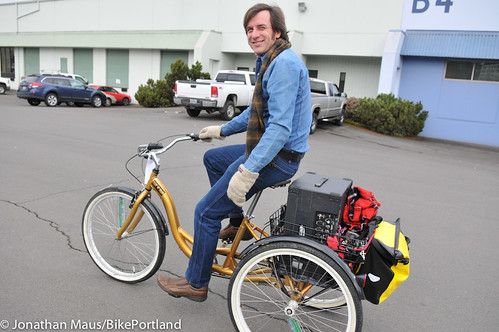 Kaufman says this incident makes him think twice about rolling the Disco Trike at protests with music blaring. He seems at peace with the citation itself; but this clash with the police, he says, has led him to two realizations:

“How do we [Occupy Portland/PDX Bike Swarm] do it better? These run-ins with the police are marginalizing the movement. This incident also leads me to realize that we don’t have the freedom of press/freedom of speech I thought we did.”

After getting his trike back, Kaufman delivered a formal complaint to the Independent Police Review Division about the officer’s conduct that night. Here’s an excerpt from his complaint:

“I believe the Portland Police violated my First Amendment rights, and that they conducted an improper search and seizure by taking away the “Disco Trike,” the multi-media vehicle which holds the equipment I use to film protests, amplify public speakers at events, and play music for marches, etc.

During the protest, I was riding the Disco Trike, playing music and videotaping the action. My sound system was not playing at the time I was cited…

… I was surrounded by mounted police near SW 3rd and Main Street. An officer started to grab the camera from my hands, tried to remove it, and threatened to brake it if I didn’t release it. The officer did not identify himself or explain why he was trying to rip the camera from my hands… I released the camera because of this threat. I complied and was handcuffed.

… I am very concerned about the chilling effect this type of police conduct has on our freedom of expression and freedom of the press. I believe the Portland Police improperly infringed my rights…”

While Kaufman says this incident has made him think twice about showing up at future protests, I seriously doubt we’ve seen the last of him — or of trikes. He said a donor has contacted PDX Bike Swarm and wants to give them several more for use at future events.

Glad to hear that Dan got his ride back! Nice job folks for helping him out!

Good Work Dan! Glad you got the trike back and good luck also with the compliant to IPRD….

Congrats on the swift work of Shifties and others in getting Dan’s trike back to him.
Viva la Disco Trike!

Sweet, let’s all go drink an organic microbrew and think that we have rights and that the anonymous police did not accomplish exactly what they set out to do! I don’t know about the rest of you, but I bet I will be paying 14% instead of 36% just like Mitt Romney in no time at all! Smiles! Rainbows! Unicorns!!!!

I’m glad to see the Mayor taking his role as Police Commissioner seriously. Now if he could persuade the Portland Chief of Police to issue a public apology to Dan and influence the DA’s office to drop all charges against him, that would help to make amends for the Portland Police’s abuse of power and violation of Dan’s free-speech rights.

I’m sure they don’t really care all that much about this and if you think they are afraid of a -woah- bike swarm- you still haven’t woken up to Amerika 2012.