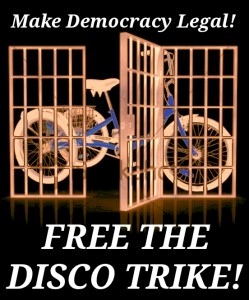 If the Disco Trike is not released by Friday, February 3rd, in full working condition, the PDX Bike Swarm will be forced to swarm the mayors office to ask more directly for its release. Anybody that wants to join the swarm is more than welcome, as we know the Bike Swarm are not the only ones that really appreciate the Disco Trike’s presence. Hopefully it won’t come to this, but if it does, stay tuned for details… We are giving the mayor a choice: either release the Disco Trike by Friday, or we will swarm to its defense!

Mayor Adams is aware of the situation and tweeted this a few minutes ago:

Adams’ attention to this issue might have something to do with the fact that the confiscation of the trike found its way onto the front page of widely read politics blog DailyKos on Thursday.

In addition to having his trike impounded, Kaufman was given a citation for “Unlawful Operation of Sound Producing Equipment.” His court date is February 13th. Kaufman also caught some of the incident on video:

UPDATE, 1:37pm: Dan Kaufman has been notified by Mayor Adams that the trike will be released today. Stay tuned.

UPDATE: Just remembered this video I shot of the Disco Trike in action back in June 2008!

Because Portlandia practically writes itself.

How do you reach DanK ?? Have you ever heard of facebook message ? OMG/Duh.

“No law shall be passed restraining any of the inhabitants of the State from assembling together in a peaceable manner to consult for their common good;” Section 26, Article 1 of the Oregon Constitution.

The sound law is being used to squash the rights of people to assemble for their common good, and the sound law applied in this way is trumped by the Constitution.

I’ve seen that trike do good and great things to keep people in a peaceable manner. Oakland should learn to play music to keep the peace.

It’s a sad day when the confiscation of a material item is viewed as preventing people from assembling in public places.

The Sound Law also has been found unconstitutional with respect to free speech, at least in some instances.

I’ve just published an update… Mayor Adams has contacted Dan Kaufman and says his trike will be released today.

awesome news! I’d like to see the pictures of that reunion…

It would be nice to have charges dropped. Any news on the citation?

The video also shows the cops used the horses with an excessive abuse of power. The video also cuts out when the cop horses surrounded Dan. My guess is that Dan did not cut the video voluntarily.

The potential for a tort claim here is high.

Sorry, I fail to see *where* in the video segment that was posted here that the police were using their horses “excessively”? They don’t appear to be trampling anyone, or anything for that matter.

got the update, good news, finally? 🙂

But it did give Bike Snob a great opportunity to have great fun with his Portland friends in Tuesday’s blog. So yeah.

Ridiculous in so many ways……