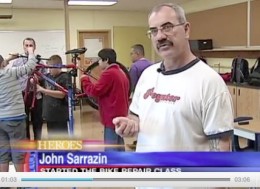 A reader brought to our attention a great story about the power of bicycles and how one person can make a difference.

The head custodian at Poynter Middle School in Hillsboro, John Sarrazin, has turned a chance encounter with a student who needed help fixing his bike into a full-fledged afterschool program. Here’s how a teacher at the school described to us how it all came about:

“Last year, a student was having trouble with fractions — and he needed work done on his bike. John taught him fractions while also teaching him how to fix his bike. Pretty soon, this student’s friends were bringing John their bikes, and he was teaching them how to fix them. And with that, the bike club was formed at my school. Now he has student crew leaders leading teams of students who are fixing up bikes and donating them to charity. We don’t have a Community Cycling Center in Washington County, so this is a pretty unique program…”

So unique in fact that Sarrazin’s efforts caught the attention of KATU-TV. They recently featured him on the evening news as one of their “Everyday Heroes.” Watch the video below…


Sarrazin donates his time and doesn’t charge students to join the club.

The Hillsboro School District says that the club has grown from eight kids last year to 50 this year. With more students to teach, the club needed more bikes; and that’s where this story gets even better… Poynter’s School Resource Officer (SRO) from the Hillsboro Police Department heard about the program and decided to donate an entire room full of unclaimed bikes from the police station.

It’s a great story and one that will hopefully inspire many others.

Definitely some good work going on in Hillsboro there. If they don’t have ’em already, perhaps we could also deliver ’em some Oregon Bicyclist Handbooks as well for the applied theory portion. Hillsboro’s definitely an easy to bike town as long as you don’t try to go to North Plains…

Maybe this place should get a mention.

That’s interesting. Poynter Middle School’s custodian-bike guru John Sarrazin is doing good work, but how could he not know about the Washington County Bike Transportation Coalition?

For years, a bunch of people with this outfit have been refurbishing donated bikes for sale at very affordable prices, providing a place for people to fix their bikes themselves, offering instruction in both repair and riding safely and competently in traffic. Staff from WashCo BTC has been invited to area schools, and provides safe riding instruction to students too.

Again, John Sarrazin’s got a good thing going though. Especially if he’s somehow able to wangle a way to have learning math be more interesting for people that don’t take easily to numbers.

Huh? Why would he know about them? or even if he did why would he want to work with them? It’s all about convenience, staying local, and keeping things simple.

Local when dealing with kids/cycling/walking is within blocks. So in this situation, Aloha is definitely not local to Hillsboro.

As soon as one adds other organizations, agencies, people, et al, complications increase exponentially and projects die and are time prohibitive, etc. KISS (keep it simple stupid) works on all levels. Kudos for John for recognizing/following this nuance.

Creating a bunch of new cyclists/bike savvy kids is huge. on many levels. for example we need less lawyers and more engineers in this country, big time. this is great first step. Or even helping create a society that is more hands-on do-it-yourself… is very important!

The reason it seems Sarrazin might have known about WashCo BTC or have wanted to work with them, is that this community cycling center has been around for awhile. It’s got experienced, knowledgeable staff, and is equipped with shop space people can use for a nominal membership fee to work on bikes.

Lovely story! Thanks for highlighting! I know that they need 3 more bike stands – could you put the word out and hope that perhaps somebody has a dusty one in their garage that could be put to better use?

What a great story!

Yay! Love this. Let’s hope it catches on with PPS!

i went to poynter.
this is awesome.

He has taught them things they will remember the rest of their lives, and they will never forget John either. Besides how to work on bikes they are learning about being a decent person, how to work together, how t listen and gain information (probably moreso than in the classroom) also the other school things he is teaching them.
Good job John

Way to go John and the students at Poynter Middle School!!

Just an FYI…..The WashCo BTC has been working with John and the Poynter group in the acquisition of additional tools and bike stand which was funded by the Rotary.
Another group I am with-BFF (Bike For Fun) taught a safe cycling class to last years students…and as we are encouraging John to have each student take this class when finished with his/her bike, we will again be there to teach. The BTC also has this class available.
At first I was taken back that John didn’t mention the BTC’s community bike shop, but will give him a pass on it -this time. Interviews have a way of going the way the interviewer wants it to go and time is short.
John is to be commended for his devotion to the students and bicycling.