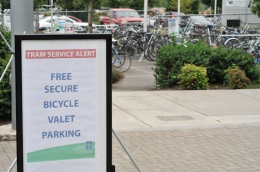 About 150 bikes are using the
temporary bike valet service at the base of
r the Portland Aerial Tram.
(Photo © J. Maus)

A bike valet service at the foot of the Portland Aerial Tram has proved so popular that Oregon Health & Science University (OHSU) has extended the service until the end of September.

OHSU began offering the service on July 11th while SW Sam Jackson Park Road — one of only two, two-lane roads to OHSU’s Marquam Hill campus (which also happens to be the City’s largest employer) — underwent a repair project. The bike valet was one of several measures undertaken to encourage OHSU staff, patient, and visitors to get up the hill in something other than an automobile.

The bike valet was expected to be offered only during the road project; but even now that the project has been completed, John Landolfe, who heads Transportation Options for OHSU, says the service will be extended through the end of September. “In the meantime,” says Landolfe, “we’ll be drafting up a proposal for a long term service.”

Landolfe said the closure posed the potential for a “real crisis” with patients being unable to get to their appointments. The challenge of maintaining access to Marquam Hill, he says, “allowed us to take creative leaps on a much faster turnaround than we might otherwise have been granted.” OHSU is working with StarPark, a private contractor, to staff the bike valet area. Attendants check in the bikes and park them in a fenced-off area.

About 150 bikes a day are utilizing the bike valet service. That’s in addition to the 250 or so bikes that use the racks near the base of the aerial tram daily.

According to OHSU, promotion of walking, biking, and tram use helped it reduce a significant portions of auto trips and the feared traffic snarls and access delays were avoided. During the two-month road closure, OHSU says they added more than 400 new employee bike riders, increased tram ridership by more than 2,000 riders per day and increased transit use by 900 trips per day.

In a related note, Landolfe announced that the one-week pilot permit given to the Go By Bike bike shop that opened last week has also been extended through the end of this month.

On my way in to work this morning, I saw a woman walking her bike along SW Moody Ave with a flat rear tire – I bet she’ll be happy to have a bike shop there! I know that would have saved me a long walk to a bike shop a couple of times in the past couple of years. I’m perfectly capable of patching a flat, but I get flats so infrequently, I don’t always carry a patch kit or pump (my frame pump is rusted in place), so even just being able to have them pop the tire on/off for me would be really helpful. I hope they find a way to extend their stay even further.

Wouldn’t it be something if someone used this situation as empirical proof that dollars spent in support of non-automotive transportation projects in fact also support automotive intersts as well?

It’s not either or; it’s both.

I used the valet service on my most recent trip up the hill, about a month or so ago, and those guys do an excellent job! Please keep up the great work! (But that tram ride is still creepy!)

Great to see this latest example of how improving the conditions for people who ride bicycles results in more people riding bicycles.

Proof that if you build it…

Kudos to OHSU in their efforts to prevent Carmaggedon on Marquam Hill. It will be interesting to see if the increased bicycle and alternative transit use to the Hill continues once Sam Jackson Park Rd. is re-opened, OHSU’s incentives cease, and summer weather comes to an end. Please give us an update in November.

A permanently installed upright pump would be an inexpensive and wonderful addition. And while the bike cart shop is great, a full shop with lights, gloves, ponchos and such would probably be a decent money maker (hint! hint!). And I dream of a nice cover over the parking…
Let’s keep riding! It’s just a little rain, Portland, you can totally ride year round!!

“During the two-month road closure, OHSU says they added more than 400 new employee bike riders, increased tram ridership by more than 2,000 riders per day and increased transit use by 900 trips per day.”

So…just close the road down permanently maybe? Seems like people were still gettin’ where they needed to go, and they were doing it in a manner that’s for the betterment of all.

Muchos Kudos to OHSU for doing so much to encourage bike commuting! Thanks for all those $50 incentive checks over the years.

My only recommendations for OHSU would be to 1) encourage the city to re-paint the bike lane at the bottom of Sam Jackson, as too many cars use this lane as a right turn lane during rush hour and 2) increase the secure, covered bike parking available throughout the on-hill campus. Happy commuters = happy employees!

Hi Jade. Regarding the striping, you’ll want to contact 503-823-SAFE (7233) or email SAFE@portlandoregon.gov (and yes, we do this to but the more public input the better). More on-hill secure parking is certainly in mind. At such a large institution with pressing construction needs though, we have to get in line like everybody else. So, in sum, both great ideas and both on our agenda.