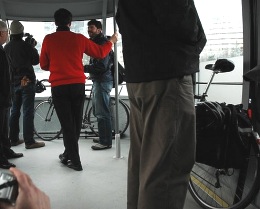 The Portland Bureau of Transportation will begin a major project on SW Sam Jackson Park Road this Monday that will result in its closure from July 11th to Labor Day (September 5th). Crews will attempt to shore up the soil beneath the road, and rebuild a portion of the road surface.

As the primary route for Oregon Health & Science University and Shriner’s Hospital, this closure will have a big impact on Marquam Hill access. If you ride your bike to “pill hill,” prepare for not just a detour, but new rules for bringing your bike on the Aerial Tram, which will likely get much more crowded starting Monday. 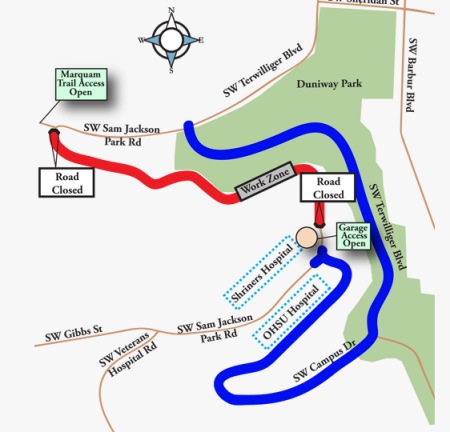 In response to this major road closure, OHSU is launching a bike valet service at the South Waterfront Aerial Tram station. Below is an excerpt from a statement by John Landolfe from OHSU’s Transportation and Parking department:

“The closure is expected to divert thousands of commuters to the South Waterfront, where lines to the tram may be long. To accommodate as many people as efficiently as possible, limited bike space will be made available on the tram when it is operating at capacity. Simply put, if there’s a line for the tram, you’ll need to find another option for your bike.” 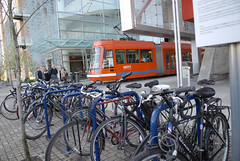 The racks near the tram are usually
fulloh in the summer.

If you don’t want to access Marquam Hill via the South Waterfront, you can still bike up via SW Terwilliger Blvd (but expect a lot more traffic than usual) or load your bike on a bus.

However, if you are like the majority of Marquam Hill bike commuters and still want to use South Waterfront, OHSU’s new bike valet at the lower tram terminal is the fastest option. Landolfe says the valet service will be open 6am to 6:30pm, Monday through Friday. Your bike will be parked securely inside a fenced off area under “continuous surveillance.”

The existing bike cages and staple racks at the lower tram terminal are already nearly at capacity (even without this upcoming closure), so if you want to use them, get there early.

For more on this project, including detour maps, visit PBOT’s website at SamJacksonRoad.com.

For the love of…6:30?! The only reason I ever load my bike on the tram is when I’m concerned that I’ll be leaving after it closes for the night. How does having my bike locked up and inaccessible after 6:30 help that, exactly?

And the staple racks are not “at capacity”, they’re well over capacity.

Guess it’s time to woman up and start riding up the blasted hill. of course, now there will be lines for the showers. Still beats driving, though. The email from our staff suggested adding 40 minutes to a car commute, just to get up the hill!

Bikes will be accessible after hours via an indoor bike cage–info on how to do this will be onsite. Also, more racks are enroute. The City gave us 2 weeks but the manufacturer needed 4. Jeff is correct that there is additional parking directly below the CHH lobby. The property adjacent to the tram is City property and the racks a mix of OHSU and City racks. As we add racks, the City removes them (which is justifiable as OHSU visitors are the primary users). The valet will initially add roughly 200 spaces and more if needed.

Who in their right mind rights up Sam Jackson on their bike? All the ambulances go up that route and there’s no room for bikes or even a bike lane or sidewalk at the side of the road. Heck, Parking & Transportation has specifically asked bike commuters to take Terwilliger because Sam Jackson is too dangerous going uphill. And Terwilliger isn’t all that bad, it’s going up Campus Drive past Casey Eye that’s murder.

One way to beat that last hill is to just ride into the Casey Eye garage, take the elevator to the top and take the tram elevator across the hall. You’ll find yourself at the upper tram terminal and the 9th floor of the main hospital. Not being a morning person myself, I don’t mind a few shortcuts to ease my ride.

I’ve seen the occasional person ride up Sam Jackson, but *far* more ride down it.

The entire OHSU campus is pedestrian unfriendly. There is no direct route to Terwilliger from the upper campus.

That’s because OHSU canceled a planned pathway/strairway from the top of Campus Dr. down to Terwilliger; you’ll notice a landing platform and opening in the wall where the stairway was supposed to land at the Campus Dr/S.J. Pk Rd. intersection.

Kerry is right about those racks being over capacity. It can’t cost a whole lot to put more in, can it? Incidentally, I’ve always preferred Terwiliger over Sam Jackson – less steep, less sweat, less trucks, and less stress.

Kerry…Nick V…there are other places to put your bike at CHH. Not all is doomed. Try the CHH parking garage, the racks behind the wall by the maintainence outbuilding to the east of CHH, etc, etc, etc….

As an out of towner, I’m just impressed that the university is taking positive steps to offset parking demand during the construction. It might not be perfect (closing at 6:30) but it’s a damn sight better than what passes for bicycle accommodation during construction in a lot of places.

The closure will also affect cyclists who are just traveling through on Terwilliger, because thousands of cars that used to go up Sam Jackson will no be trying to turn in and out at Campus Dr.

At a recent meeting about the impending closure, OHSU & PBOT reps said there will be a flagger to keep things moving safely. But most of the southbound Terwilliger cars will be turning right onto Campus, while many of the southbound cyclists will be going straight. I asked that the flaggers be instructed to let the cyclists go first before waving the southbound vehicles through. It was also suggested that flaggers wave northbound cyclists through even when northbound vehicles are stopped to let Campus Drive traffic onto Terwilliger.

I’m sure there will be headaches at first, but my sense is that OHSU & PBOT staff are open to suggestions. There is even hope that the push to reduce vehicle traffic will convert some commuters who have been coming by car by showing them that biking to OHSU works.

OHSU official-types: Could you replace the instructions for how to use the vertical racks? They’re all faded and torn up. For the life of me I couldn’t figure out how to secure my bike to the hitch with a U-lock…

Busy down there today!!

Kerry, for OHSU-specific requests or info, you’ll want to contact bike@ohsu.edu. They’ll be able to help you from there.