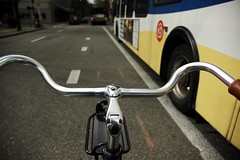 TriMet has just announced that they’ll discontinue the audible warning system they’ve been testing in an effort to improve safety of people biking and walking near buses.

In a statement, TriMet said they stopped the test, “because the announcement didn’t activate at the appropriate time—either too soon or too late in the turn—but did activate at other times, such as when the bus was making a lane change.”

The pilot program was launched back in March following a high profile collision of a bus and people walking in a crosswalk (in April 2010) that led to multiple fatalities.

A left-turning bus also ran over a man on a bike on the transit mall downtown last year.

“… it was determined that the technology has not advanced enough to make it an effective tool to help alert pedestrians and people riding bikes that a bus is turning.

The system was not intended to change TriMet’s legal and professional obligation to operate safely, be alert and scan the intersection before turning.

As the technology advances in this area, TriMet would be interested in testing an audible system in the future.”

The message was also loud inside the bus, but nearly inaudible outside in traffic.

Good. I’m glad they’re trying different things, but this one did not work well and they’re right to can it.

Minor correction: the buses were a recommendation of a consultant, not the task force. That’s not to say the task force objected to the idea, just that they stuck to less technical recommendations, presumably because they didn’t want to presume that experiments like this one would work.

I’m glad they’re pulling it. Worth a test I suppose, but this project was a giant fail.

I appreciate the effort…thanks trimet.

If the steering wheel rotation was not a suitable trigger for the signal, why not just hook it up to a slightly more elaborate turn signal. I think BMWs already have them where you push the lever a little for a lane change, and a lot for a turn.

Perhaps the drivers’ use of the turn signal is not reliable enough?

In general the idea seemed under developed and never should have even reached the testing phase.

great news! that thing was annoying, and as stated was always going off at the wrong time… there’s already enough noise pollution from the bus announcements when they stop to let people on…

people (and buses) need to watch where they’re going…

If you make the bus”responsible” for the turn notification (like the steering wheel), you take the driver out of the responsible position (actually using the signal).
Not sure how I feel about requiring even less out of a driver, be it car truck or bus. I’ve often thought they make cars far too “cushy”. I believe It enables drivers to pay less attention to the task at hand.
I know it’s not an easy job driving such monsters…but do we want more drivers fiddling with their I-pads as they drive? (over the top analogy).

I’m glad that the audible notifications are gone. They served no purpose: The vehicles are already equipped with more turn signals than required for it’s size, and are operated by professionals. Just because that one loser ran over some pedestrians doesn’t mean that the majority of TriMet’s drivers suck.

I appreciate the effort, too, but I’m disappointed that someone didn’t foresee this and stop it before it got started and money was spent.

Thank GOD. I am so tired of all these stupid/redundant/multi-lingual announcements on TriMet. Who on MAX can’t repeat verbatim “in designated areas, please move for senors and people with disabilities” “the doors are closing” and the mirad annoying noise pollution. A simple tone would suffice for doors closing. The only noise necessary to warn people of a turning bus should be that of the brain of the driver being diligent and not running people over!

It used to be a simple “ding ding” before the doors closed, but then the 200-series MAX cars were introduced in 1998, inflicting the “Talking MAX” on us. I hate that. When will TriMet learn we hate mass transit that brainlessly talks to us for exactly the same reasons we hated cars that did that in the 1980s? And as long as we’re on the subject of multilingualism, putting a token phrase in spanish in the announcements only serves to suggest that Spanish-speakers living in a part of the world where English is the vernacular language are incapable of integrating into society without handholding and public gymnastics. It’s not like we’re in a part of the country that has multiple widely spoken vernacular (and often official) languages.

Between the recorded announcement overkill, ending the Bikes on TriMet permit program, and catering to the entitlement cows who can’t be bothered to fold their strollers or remove their children from the vehicle when they’re loud or misbehaving, really makes me wonder if TriMet outright hates all their passengers who don’t own a car and have a shred of sanity left.

Back to the drawing board – further study needed by the company that designed the device (not Tri Met): 3/4 steering wheel rotation? Triggered by front wheel angle?

Safety trumps annoyance in my opinion, but agree the professional driver has the ultimate responsibility that cannot be replaced by warning signals.

It’s sad that no matter what Tri-met tries to do, BikePortland is here to beat them to a pulp for it. So much for trying to work together.

Probably because pretty much since 1997, every new idea they’ve had has been wrong. If they went back to 1995 and kept the status quo (bike permits, folded kid carriers, buses and trains that don’t talk to us, Fareless Square, keeping fares low with business taxes), they’d have nailed it.

So easy to throw stones. I suppose the same losers who criticize TriMet for trying something (i.e., a test of the concept – NOT a systemwide installation) would be the first to criticize had Trimet experienced another accident without having tried newer technologies. I don’t see anything from TriMet that goes to their backing off their own responsibility. Now then. If we could only get cyclists to actually obey ALL the rules of the road and not just pick and choose which to obey…

I’m glad to hear Trimet has pulled the prompt (for now). It was patently annoying for riders, so I can only imagine what it was like for bus operators. I would suffer the annoyance if I believed such measures would truly address the problem. But seeing how many pedestrians–er, people who walk–make every effort to tune-out their environment I don’t think the recording would make much of an impact. Perhaps a foghorn.

Gee, how about re-installing the audible which SHOULD BE TRIGGERED by the turn signal! I have never seen a TriMet bus lane change without a signal. Trimet management should not assume that their operators are idiots.