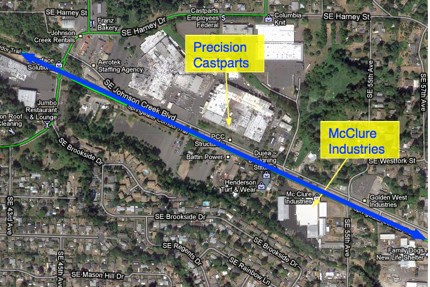 For the second time since November of last year, people who bike on the Springwater Corridor (in blue) have raised concerns about emissions from nearby factories.

At just after 5:30 pm yesterday evening a toxic cloud of chemicals formed above a factory in Southeast Portland just yards away from the popular Springwater Corridor bikeway.

“… Once I got home and heard there was a chemical leak and a toxic cloud forming, I was pretty frustrated that they let us bikers ride through without warning.”
— Tina Osterink

The incident occurred at Precision Castparts on the 5000 block of SE Johnson Creek Blvd just east of Harney. According to The Oregonian, the cloud was a mix of hydrochloric and nitric acid that caused respiratory injuries for two firefighters. Authorities called for a residential evacuation near the factory and closed SE Johnson Creek Blvd.

But according to Sellwood resident Tina Osterink, there was no warning of the threat or official closure of the Springwater Corridor. Osterink wrote us to share her experience:

“My coworker and I were biking home to Sellwood from Gresham yesterday when we noticed fire trucks arriving at the Precision Castparts plant on Johnson Creek Blvd. The firemen were turning cars around along the street yet they did not think to alert us bike commuters, which once I got home and heard there was a chemical leak and a toxic cloud forming, I was pretty frustrated that they let us bikers ride through without warning.”

Osterink says she woke up with lung irritation this morning and is worried that she might have been exposed to harmful airborne chemicals.

“Actually,” Osterink says, “I’ve always wondered about biking next to that industrial area and if they should be monitored more to protect people walking and biking along that stretch.”

And she’s not the only one.

After news broke of this toxic cloud last night, I recalled our story back in November about residents’ concerns of emissions from plastics manufacturer McClure Industries. Residents near that factory say McClure is releasing too much styrene into the air.

Both of these incidents raise the issue of whether or not the Oregon Department of Environmental Quality (DEQ) and other regional agencies should begin to recognize the Springwater facility as a transportation corridor and adjust their policies and response protocols accordingly.

Surely, air monitering devices could be mounted in active industrial areas, not just for bicyclists, but for residents as well. Bicyclists are not the only users of Springwater.

And industries that are emitting, or have the potential to emit, toxins in a urban, suburban or rediential environment should be paying out of their own pockets for alarmed sensors that will scream loudly while alerting government authorities.

And just down the road from my house. Awesome.

Just missed it on the way home last night, but thanks to a friend, was ready for the unmarked detour this morning.

Any idea if the air quality has improved today? I was going to link my ride tonight up to that portion of the Springwater, out to I-205.

Atmospheric conditions yesterday (heavy low clouds) were preventing the gasses from dissipating. Given the weather today, I would imagine there is no risk now. The leak was stopped yesterday.

the company uses radioactive materials as well as other hazardous materials to make molds for parts. i applied for a job handling radioactive wastes there. i never got that job. i think it is a good thing.

was carless
Reply to  rootbeerguy

smelled it yesterday evening right when I got home from my ride with my 2 year old son.

guess just to be safe I’ll avoid it on the way home this evening with my 2 year old son… (:

thought about making a detour to the waterfront, but maybe we’ll just stick with our usual route…

Oh the irony, as many bicycles have been produced as a result of tubes made right there…… Can you say Specialized?

Oh, no, you can’t, throat is irritated… Sorry

No. They mainly do do aerospace and medical. I can’t find anything about making tubes.

They used to is what I was meaning… sorry..

Interesting news since this is along my regular commute, however, yesterday I took Max. I regularly smell something that smells like epoxy resin when I ride by the McLure building (the building that looks like a big blue shed). I get a very similar smell from a building along the 205 path. I think the building is just south of the Fuller Rd. Max stop.

I’m by no means a regular user out there, but in four years and probably two-dozen trips along the Springwater in that segment, I have always–every single time–smelled a industrial chemical odor that made me wish I could hold my breath for five minutes while passing through.

Event or no, the air quality along that stretch of the trail is unfit for the living, let alone the deeply breathing pedaling set.

i love that smell… :X

Here’s the link to send an email to Portland’s Emergency Management Office. http://www.portlandonline.com/oem/index.cfm?c=53978

If we let them know about this issue then next time they will close the trail as well.

Thanks for the heads up… now if only the EPA will pay attention.

Actually, I believe it was hydrofluoric acid, not hydrochloric. Even worse.

I’m more concerned about the massive amount of broken glass allover the springwater. I should start keeping a tally of busted OE bottles.