Portland Parks & Recreation has given local off-road biking advocates official word that the Ventura Park Pump Track project will move forward. The project will be Portland’s first official pump track and it will be managed in a partnership between Portland Parks Bureau and local non-profit group, the Northwest Trail Alliance. 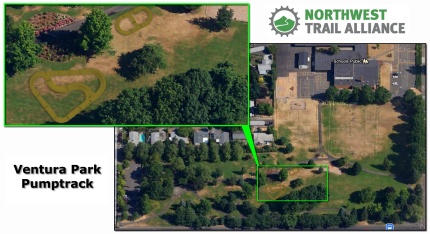 Parks hosted a public demonstration of the pump track at the park on April 9th as a final step to make sure the concept would be welcomed by the Hazelwood Neighborhood Association. On Tuesday, Parks staffer on the project, Sarah Coates Huggins emailed stakeholders with the good news that, after receiving positive feedback from the community and the neighborhood association, the project could move forward.

Final details on the pump track and a public announcement are expected soon. Source say construction of the pump track could start as soon as June if the permit process goes smoothly.

If you’re not up to speed on pump tracks, the idea is a relatively small track with a mixture of roller bumps and banked corners (berms) that are meant to be ridden without pedaling. There can also be small jumps and other features. At Ventura Park, there will be areas for all skill levels, including young kids.

Stay tuned for more details and an official announcement. For now… Way to go Northwest Trail Alliance and Portland Parks. A great partnership and a project I hope we see replicated in other parks throughout the city.

This is great! Hope it works out so other locations could be considered.In particular many park spaces in North Portland could be looked at. North Portland could possibly be the best area for younger people to ride in, in all of Portland. It also could be a great way to invite a good deal of diversity to the bike scene by creating environments that bring young folks together.This example is readily seen at any skate park in the area.

We’re looking at a site in Portland right now. Might have news in the next couple months….

sweet! time to break out the toddler on the balance/gravity bike…

Yeah! My neighborhood park is getting a pump track! Wow!

OMG my inner imp is doing manuals for joy

Good job. can’t wait to ride it, or maybe even help shape it?
However the title should be Portland’s first “officia” pump track,as i could point people to many of them already built…

Oh wait, in my sleepiness I see it is stated as such now…lol

Awesome work NWTA, and on a positive note, it’s made of dirt, which is ‘dirt cheap’….you could build many of these for the same cost as one skatepark.

This is great news, and great for East Portland!