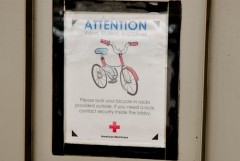 This sign greets visitors to the American
Red Cross in North Portland. It reads, “If you
need a lock, please contact security inside the lobby.”
(Photo © J. Maus)

You know the feeling… Just as you roll up to your destination, you realize you forgot to bring a lock for your bike. If you’re with friends, no problem; but if you’re by yourself, you’ve either got to make a change in plans or take a risk and leave your bike unlocked (not advisable).

“I wanted to make it easier for people to pull into APEX on a whim when they were out for a ride.”
— Jesse McCann, Apex Beer Bar

North Portland resident Olivia Rebanal forgot her lock on her way to an acupuncture appointment at North Portland Wellness Center, so they offered her a cable and padlock. “It wasn’t a u-lock.. But still, better than nothing.”

At the American Red Cross on N. Vancouver Avenue, a sign near the bike racks says to inquire at the lobby if you need a lock. I spoke with a woman behind the front desk who said people utilize the loaner frequently. “We just call security and they have locks to loan out. Just give us an ID and the lock is yours to use.”

“I wanted to make it easier for people to pull into Apex on a whim when they were out for a ride. If I can lessen the obstacles that keep the casual cyclist from going out for a ride, then we both win. You shouldn’t have to choose between carrying a lock or having a good beer.”

Being a brewpub, McCann has a lot of customers who stop in after a long road ride for a beer (he also shows major races on his big screen, so serious roadies are a big part of his clientele). And, unlike folks commuting to work or running errands on their bike, no serious roadie who heads out for a long ride carries a u-lock.

“Nobody wants to carry a lock capable of protecting a road bike when they’re out riding on one,” says McCann.

Loaner bike locks are just one way Portland businesses cater to bike-riding customers. Do you know of other local businesses that offer this service? Let us know in the comments.

I’ll admit that while my frame lock and plug-in chain are damned quick, easy and convenient to use, they add a ton of weight to the bike. If more businesses did this, I’d opt to leave the chain behind more often.

What an awesome idea.
Lots of places have “lost” my business because I realized that I’d forgotten a lock at the last minute. Now that it’s the season to take out my “fun” bikes” this happens more often because I forget to switch locks over.
I have brought my bike in to places from the grocery store to the Dentist’s too, but that’s not a great solution.

You add the Portland Building to the list as well. Though perhaps not quite as exciting as dropping by Apex though..

In Vancouver B.C., bike theft is really awful, and one of the MEC stores (it’s a sporting goods co-op) has a sign near their bike racks saying something like: “High theft area, if you do not have a U-lock we will loan you one.”

Once I was riding somewhere and realized near my destination that I’d forgotten my lock, and a bike shop nearby lent me one that they normally use on their rentals. I’d actually gone in to buy another one, but when I said I’d just forgotten my lock, they offered! Pretty awesome.

I normally carry my U-lock everywhere, but I know I’ve forgotten it when switching bikes or whatever, so it’s cool that more places have loaners.

This is a great idea, and it’s just about the cheapest bike-friendly thing a business can do. A cheap U-lock costs as little ast $10, takes up less space than an umbrella, and should last for years.

oops, forgot to return the lock

Oops. They have your license.

Library card. The DMV has my license(and won’t give it back).

Down here in Corvallis the First Alternative Co-op (North Store) has a loaner lock. And pump. And plenty of staple racks, under cover. And a couple of racks down on one end that are rotated ninety degrees for cargo bikes or trailers. And a card you get punched each time you arrive by bike (or foot or bus) and spend $10 – when fully punched it’s a $5 coupon. If you call ahead, they might be able to round up a volunteer stoker for anybody on a tandem.

The building at 800 NE Oregon St in the Lloyd district has spare cable locks. Kudos to Portland Building, too. Nothing worse than biking to a meeting and realizing you forgot your lock.

Terrific idea! I’ve bypassed businesses many a time after forgetting my lock.

Having seen a few BUIs, perhaps drinking establishments could enhance the theme by offering to lock up your bike and only unlocking it for the “non-inebriated.”

Being bike-friendly is smart business, thank you to those business owners who are taking steps like these to serve those arriving by bicycle. Bicycles mean business!

Only problem I see with this is if some wise guy decides to make an imprint of the keys to the loaner U-locks and file out their own copy of the key for later use on other people’s bikes the locks are securing.

We’ll see. Maybe U-lock keys cut is complicated to the point of defying an easy imprint copy process. Lots of people like a challenge, so if it can be done fairly easily with almost no tools except a file, I would not put it past a hyper-energetic reasonably intelligent meth head to accomplish the trick.

For everyone, as well as myself, I hope secure, loaner bike locks work out, because I hate hauling a bike lock around.

Also in Corvallis, OSU’s Dixon Recreation Center will loan U-locks to students. I don’t know if they do that at PSU yet, but maybe someone should inquire at their shiny new Rec Center…

I’d even consider locking a chain on a rack near a store I frequent, just to avoid carrying it on a long ride.
Unfortunately, many businesses routinely cut such locks off.

As a messenger, if you forgot your lock, it broke, or what have you, Dean (BC) would loan you one. I think it cost a dollar, which you got back…..
I believe that has gone on for avery long time…

Alameda Dental on NE Fremont keeps a loaner lock available. They bailed me out once. Dr. Selis is a great dentist too.

Wow, great service idea. I rode to New season’s the other day and realized I had my lock but no key. Had to ride back home and get it.

Silly thing was, I didn’t think of going across the street to Revolver, I’m sure they would have let me park my bike there for 15 minutes while I shopped.

I wonder if there’s such a thing as a rack with a lock integrated into it? You could pull up, lock up and take the key into the store, and leave the key in the lock when you leave the rack. Hmm.

One of those oh crap moments.
Delivering to the 42nd floor of the Big Pink. When you pull the delivery out of your bag, you also find your lock……

Like I needed another reason to support Apex. But there you have it.

Another way to help folks out: let them bring their bikes inside while they are at the establishment. This is what we do at my Chiropractic Clinic, Hosmer Chiropractic Health.

We work with a lot of cyclists, many of which ride their bike to our clinic for treatment. I think that more people ride down for treatment when they know that they can bring their bike inside.

Here’s another idea I’d like to propose, especially if you’re a school employee, parent volunteer, or have a kid who attends school.
Another teacher and I started an after-school bike club at our middle school here in Gresham. shortly after the club started, we had three kids get their bikes stolen from the crappy “toaster” rack out front – in broad daylight during school hours. One bike was unlocked, the other two locked together with a flimsy cable that was probably cut with heavy duty scissors. It nearly killed the club. We all want kids riding their bikes to school, but unfortunately, nowhere is safe from bike thieves and these kids learned that the hard way.

A lot of our kids come from low income families and many are riding hand-me-down bikes. Purchasing a nice shackle lock just isn’t in the family budget. So the kids take the bus instead of riding their bikes.

So we did two things. We were able to access federal Healthy Schools funds to purchase 12 new staple racks (in school colors!) for increased capacity and security. They were installed this weekend, just in time for Bike and Walk to School Month. Ridership is up already.
And I wrote to several lock companies explaining our predicament and our plan. Abus and Kryptonite both came through for us with lock donations. Now we have nearly 30 robust locks available for kids to check out if they don’t have their own or forgot their lock.

There are a lot of ways schools can promote increased riding. Making sure kids have a secure place to lock up and possible providing locks for them to use could be an easy way to get more kids to school under their own power

I’ve been lent a lock by a checker at the Raleigh HIlls New Seasons market. They’ll keep my business forever.

I have a feeling a dozen more businesses will stock a couple of bike locks for their customers after reading this article or having it suggested to them by clients.

I love this idea. It combined community with environmental awareness. We ride instead of drive for our bodies, for the environment and now if you forget a lock, someone from the community will help you out. I’m going to start to keep a few extra locks at my office and post a sign like that. Thanks for the inspiration.