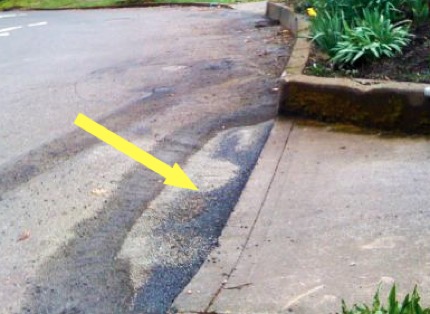 After hearing about the issue from a citizen, PBOT smoothed out the harsh bumps that used to exist on the median at NE Tillamook and 16th.
(Photo: Josh Berezin)

We’ve spotlighted the City of Portland’s 823-SAFE “Traffic Safety and Livability” hotline and email (safe@portlandoregon.gov) several times before and we’re going to do it again. Why? Because we love to share success stories that show the power of engaged citizens and a responsive Bureau of Transportation.

The case in point today are two bumps that used to stand out on one of Portland’s best bike streets — NE Tillamook.

About two weeks ago, Portlander Steve Bozzone decided he was tired of hitting the gap between the street and the sidewalk cut-through on the median at NE Tillamook and 16th. “I was frustrated… It’s a jarring bump on a serious piece of bike infrastructure. I thought it should be smoothed out.”

Bozzone didn’t get mad, he got out his computer and emailed the livability hotline. Here’s what what he wrote:

I often take this route on my regular errand runs, and I have to say the two sidewalks both have a large gap between the curb and the street surface. Is there any way we could get these smoothed out? It’s my understanding the 1996 Bike Master Plan included guidance that all transitions should be no greater than 1/8″ inch out of plumb.

Some cyclists are happy to ‘bunny hop’ these things, but I wonder if grandma would? It would sure make things a lot nicer for the thousands of folks on bikes who traverse this intersection daily.

Thanks for taking a look!

Steve’s email is the perfect template for how to ask PBOT for help. He has a positive tone, he references policy guidelines, and he makes a compelling case for his issue. As a result, it only took PBOT a week to handle the request and send out a crew to smooth out the bumps.

I rolled over the smooth curbs Wednesday night for the first time and noticed the difference immediately (even in the dark). I was so happy, I did a u-turn and rode over them a few times to celebrate.

It may seem like a little thing, but little things add up to big things. The more of these minor annoyances we get fixed, the closer we’ll be to a truly world-class bikeway network. Next time you come across something like this, pick up your phone (after you’ve pulled over of course) and report it to 823-SAFE or email safe@portlandoregon.gov.

And next time you roll through the median at 16th and Tillamook, think of Steve.

Thanks Steve! I use that route occasionally when biking to/from downtown and agree that lip was nasty. Especially since you don’t really hit it at a 90 degree angle if following a straight path across the intersections.

Well done and Thanks Steve.

I’ll think nice thoughts about you guys whenever I ride through there.

Everyone else — remember, you can use your camera and smartphone to send in maintenance requests to safe@portlandoregon.gov Try it for yourself, you’ll be pleased with the results. And so will the rest of us.

Thanks Steve! I take this path frequently as well and the bumps were prtty annoying and having to hit them at an angle never helped either.

cool, nice to hear.
i’ve gotta say, though, that the description of tillamook as ‘one of Portland’s best bike streets’ is stretching it a bit. sure there’s a few nice portions, but there’s way too many street crossings where i’ve been nearly killed on my commute.

Not to mention how many times the street ends and starts a block over, and the massive cracks every 50 feet and washboard stone surface. I avoid Tillamook and the Going Street whenever possible.

I have had success using my iPhone app “PDX Reporter” which allows you to send a photo with location data to PBOT. Within 2 weeks a crew fixed a nasty pothole on SW Barnes Rd just below the radio towers.

This will teach me. “Better to light a candle than to curse the darkness.”

Thanks Steve and Jonathan for posting. I totally noticed this improvement last week. It’s great to see a good process in action.

I was very happy to see this work done when I rode through it over the weekend. NE Tillamook is by far my most-used bike route in Portland. This makes it that much better to ride on. Thanks Steve for reporting it, and PBOT for fixing it!

Ditto, and Ditto. I would say, though, that each of the dozen or so times I’ve ridden over the improved ramps, I’ve gotten the feeling that the surface there is a bit sandy/gravelly. I get the feeling I’ll slide out. Next time I’ll make a point to stop, get off, and check it out at ground level.

they probably sanded the tar they used to bond and seal the ramp to the existing pavement at the time they did the work. not that safe for cyclists but the maintenance bureau crews probably don’t understand the hazards of loose sand and gravel to cyclists very well…

Aha. I checked yesterday on my way home and both ramps are covered in lots of coarse sand. Wish I’d had a broom on hand.

I have been wanting to see this happen since 2006 but never thought 503-823-SAFE was an appropriate place to request the change. Good to know that curb conditions can be addressed via the hotline. I’ve been riding over the smoothed transition for the past few days at 16th Ave and loving it.

I wonder if problems like this are best addressed from an ADA (wheelchair) standpoint than a bike one. The ADA violation carries severe financial penalties, the bike issue does not.

Coo approach. Not sure it would apply here, though, since the offending ruts/bumps are with purely bike cut-through facilities and not sidewalk access. See Google streets image.

I see. Interestingly enough, the streetview image shows the sidewalk IS in ADA violation, that is not an acceptable curb ramp at all, unless it was also fixed.

I’ve yet to try the Traffic Safity and Livability hotline, but it’s now on speed dial.

Actually, I had it on speed dial, but I typically default to the Maintenance Hotline 503 823 1700. Perhaps I’ll have better luck with it.

It’s a great feeling to have PBOT improve things so quickly. Thanks, Jonathan for shining some light on the successes of using the hotline. I appreciate the support, and I encourage you all to experience the euphoria of calling in an annoyance or safety concern and having the issue resolved! If this case is any indicator, *nothing* is too small of an issue to call in. Major, major props are due to Eileen Dent of PBOT Traffic Investigations for gracefully and patiently fielding our requests!

cool stuff. this, combined with the pot hole hotline (which I use a couple times a year) can really help the conditions out there.

I use this route daily for my commute to work. It has been a much smoother ride the past few weeks because of this improvement! Thanks!!

Since the mid 90’s when I was on the CAC for creating the Tillamook bikeway (please do not call it a “bike boulevard!”), I have been so thankful for at least one diagonal diverter to motorized traffice that I hardly noticed the bumps. But thanks Steve, it was a smooth ride this morning after a couple of weeks away. Now how can we get more diverters…with smooth transitions…to reduce the cut-through motorized traffic on the city’s bikeways and make them real Bike Boulevards?

Steve B
Reply to  Lenny Anderson

Lenny, keep your eyes on 13th and Holman, the first heavy-duty diverter we’ll see in at least a decade on Portland streets. PBOT seems to be favoring the soft/half diverters lately, possibly to maintain emergency vehicle access. We watched one proposal for a diverter whither away for the Klickitat bikeway at 33rd when a local resident made a big stink about not being able to make a left onto his street. These diverters are desperately needed on some of the older bike boulevards like Ankeny, Tillamook and Clinton.

Why the objection to calling Tillamook a bike boulevard? I’ve come to understand neighborhood greenways are boulevards 2.0, and categorically not the same as the old boulevards.

Steve B
…a local resident made a big stink about not being able to make a left onto his street. These diverters are desperately needed on some of the older bike boulevards like Ankeny, Tillamook and Clinton.

Why the objection to calling Tillamook a bike boulevard? I’ve come to understand neighborhood greenways are boulevards 2.0, and categorically not the same as the old boulevards.

The latter is because there are still way too many stop signs on Tillamook, therefore it doesn’t meet the standard for being called a bike boulevard

there are still way too many stop signs on Tillamook

I never even noticed the bump. Too busy dodging potholes and crevasses, I guess. Looking forward to experiencing the new smooth.

Another note, after PBOT fixes something for you, you can take a photo of it and reply to their original email with a “thank you” note. Send them warm fuzzies and they’ll probably take better care of you and your peeps.

You can even send them a thank-you note for stuff they did without being asked, or because someone else asked.

Do you ride Tillamook and 16th on a regular basis? Try it out — send them a thank-you note at
safe@portlandoregon.gov and tell them how much you appreciate them smoothing out those curbettes and how much comfier it makes your ride.

Has anyone been by there in the rain since the fix? From the photo it looks like the water will dam up where they put the black top.

Tulsa’s working on similar issues with similar results. If you’re in Green Country and reading this because Bike Portland’s about the only blog in America covering bicycle transportation topics regularly, the local equivalent is the Mayor’s Action Center at 918-596-2100.