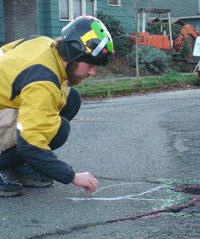 Last month, Johnson led a ride to chalk up potholes on his daily commute. Heather Andrews joined him, and it’s a good thing she did.

Andrews’ photos landed in my story about the ride and they were also noticed by Oregonian reporter Michael Bales, who then covered the story in the inPortland section of the Oregonian the following week.

According to Johnson, the day after the story ran in the paper, PDOT crews had filled many of the potholes. In an excited email, Johnson wrote, “So this morning I’m steering around one of the potholes I have to ride around every day, and well, where is it?”

Johnson said he couldn’t even count all the spots they fixed on SE Woodward between 51st and 52nd.

Portland’s bike coordinator Roger Geller says PDOT’s maintenance crews are top-notch and they are usually very quick to respond when people point out the location of potholes and other hazards.

If you’ve got a problematic pothole on your daily commute, don’t be shy. Call PDOT’s pothole hotline at 823-BUMP or fill out the online maintenance request form (which can be used for all sorts of issues).

Huh. I ride that part of Woodward all the time, and I don\’t remember it being particularly potholed. Must have just gotten completely desensitized…

Dan, that\’s so great! Way to bring attention to an issue with plain old fashioned good natured bike fun. Can\’t wait to see what you do next!

Okay I must admit I still haven\’t called in any of the potholes. So the city fixed the potholes as soon as they heard about them which happened to be when the story was in the Oregonian.

I barely warned a little girl in time for here to steer around one of the two remaining potholes. I would feel really bad if someone got hurt because I didn\’t report a pothole, so lets get on it. Program that number into your phone, and when you see one let the city know right away. Don\’t put it off like I have.

Seems like a good time to remind people of this website… Portland Office of Transportations \”Bike Route Need Maintenance?\”:
http://www.portlandonline.com/transportation/index.cfm?c=34818

I wrote in via the website about a missing sign, I had noticed repeatedly over the previous couple weeks, and the next time I passed it was back.

I just got home and there was a message from PDOT. I guess my wife called something in on her walk to work and they were calling to let her know that they would be sending a crew to assess the situation asap.

They are good. Seems we just need to let them know where problems are.