[After a hiatus, our Bike Science column is back. Below, carbon fiber master and engineer Shawn Small shares the science behind one of his recent projects. 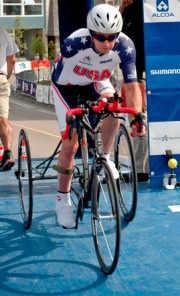 Steven Peace was a Lieutenant Commander in the Navy in his early 30s when he suffered a massive stroke while lying alone one night in his apartment. He was found 14 hours later when EMT’s broke down his door. When he came to, he was paralyzed on his right side and suffered from severe aphasia.

Only 6 months after leaving the hospital Steven quickly defied all odds by riding a Catrike Trail (recumbent) in the Soldier Ride which goes from Phoenix, AZ to Las Vegas, NV. Here’s how Steven described that first ride; “..the ride was unbelievable, and life-changing. After the first ride, I knew I had to do another one, and another, and another.”

After a few years on the Catrike recumbent, Steven decided to make the transition to an upright trike for competition. The stroke had left him with poor balance, so a standard two-wheeled bicycle was out of the question. With an upright trike he would then be able to compete on the National and International Para-Cycling levels.

Steven recently received a new carbon fiber Specialized Roubaix Pro as his race bike. Steven uses a custom solution to help stabilize him while racing. Similar to stabilizer systems used for heavy front racks he has two strong springs that attach his fork to his frame. The springs are then attached to the frame onto a carbon fiber post that Ruckus Components (my company) installed. This helps keep the fork and bike pointed forward and absorb the turning forces generated by road and rider forces.

Now for the nerdier (fun) side of it, we will use some basic trigonometry and Hooke’s Law to approximate the spring force. Hooke’s law states that:

Where x is the displacement of the spring (how far you pull it), F is the restoring force generated by the spring, and k is the spring constant of the spring chosen. We know the k value from the spring manufacturer (91 pounds-force/inch), so we need to compute the distance (x) that the spring is stretched when he turns.

To determine the distance (x) we use our rusty but trusty high-school trigonometry skills (SOH-CAH-TOA), to calculate (x): 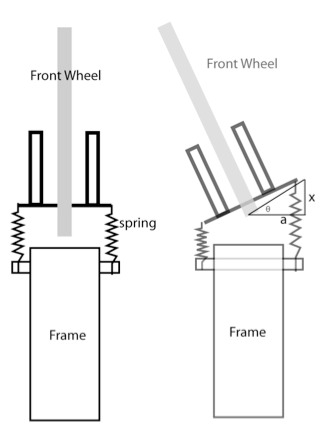 Since Ruckus Components attached the system I know the (a) value is 1.5 inches, so for a turn of the fork by 10 degrees we can calculate the following:

Using this value with Hooke’s Law and our spring constant:

Using our close friends the spreadsheet we then can tabulate a quick range of values for different turning angles:

I know all these numbers might seem like they have nothing to do with bicycling, but in Steven’s case, they do.

With his modified trike, Steven won his first National Championship race and led to placing 8th in the road race and 9th in the time trial at the World Championships. In 2011, Steven will be competing with the U.S. National team in Sydney, Australia. We wish him the best of luck with his new race set-up and were honored to build it for him.

— Read more about Steven in this article in his hometown newspaper.

I don’t get it. You’re showing us the righting force you added to the steering, but didn’t tell us how you decided on these numbers, or why they are important… -24lbf at 10 deg, why not -12lbf?

More specific explanation about how this particular upright trike works is probably in order. ‘sounds as if you’re saying that the frame triangle, front fork and wheel tilts independant of the rear wheels. Or maybe not.

Some months back over at bikeforums ‘classic and vintage’ category, a thread was posted that came to have some very interesting info about upright trikes, their history, and current interest. Today, that type of bike is probably way off most people’s radar, but could very well have lots of potential, that more familiar bikes don’t offer, for meeting the needs of various types of people that aren’t currently riding.

@Allan
The springs and their locations were chosen by Steven and his coaches, they had determined those details from a few previous set ups.

@wsbob
I wish I had the trike myself to play with but it is down in San Diego. The wheels/frame do not tilt independently. It would be really cool to see a design that does though, I have heard of a few trikes that do. Probably Bill Stites would be the man to ask!

I love this stuff. Thanks for putting it out there for us to toy with.

To take it a step further, does the spring at “B” add an opposite force to Spring “A”? Therefore influencing the turning force calculation for the system.

Couldn’t leave it alone so I decided to give it a shot.

for the system lets assume there is no preload on the springs when X = 0. Call the deflection of the other spring “Y”. K is the same for both springs.

So the system Force would be neutral at some point and it is non-linear.

I think this is right.

It also looks like the spring on the inside of the turning front wheel is compressed a little–does that mean it started out under some amount of tension (i.e., some stretch distance, x)? When the wheel is pointed straight ahead, are both springs neutral, or are they both under some tension? I would imagine that if they are both under some tension, that the forces involved would cancel each other out, rotationally speaking, however, once the fork was turned, the canceling force of the opposite spring would be lost. I guess my question is, did we account for the initial small x (if any) being applied to the spring in its “straight ahead” position? Do we need to? Why or why not?

A free body diagram is how you do this: sum of the forces and sum of the moments(torque) is zero in a static system (otherwise something is accelerating).

A free body diagram always helps. The “answer” should be not in a force but a moment ( or a torque), sum of the moments about the steering axis. At 0 deg steering angle the moment is of course zero. At greater steering angles the torque is the moment arms (which vary with the steering angle) times the spring forces (which of course vary with the deflection). So the geometry is a tincy bit more complicated then shown, (depends on spring length and spring anchor location as well), but for all practical purposes close enough.
-john, bsme, msme, pe

I believe we have a winner! Got to love those FBD’s!

Okay…now that I’m looking at the diagram again, and reading some of the techie posts above, I guess I wasn’t paying attention to what the mods provide by Shawn Small’s company were supposed to do for the rider of the trike. Partly wishful thinking, I suppose, that the mods might be designed to allow the rider to lean the bike into turns.

That Steven Peace can ride and race well, such a bike(trike), relying on only one arm to support his upper body is an extraordinary accomplishment. Considering the physical challenges requiring that he need do this, stabilizing the steering is a logical aid.

His idea to use for a bike, what’s essentially a two-wheel road bike with the relatively minor addition of a third wheel to help deal with balance issues, is also great. More of these on the road could really open up people’s eyes to possibilities they may not ever have thought of before.

I got the impression from the article that his new “bike” was an actual bicycle, not a trike as shown in the older photo at the top of the article. Is there any need for steering stabilization on a trike? If the new machine isn’t a trike, then I’d like to hear how the spring stabilizers help overcome the unique balance challenges of a stroke victim like Lt. Cmdr. Peace.

I wish I had the trike myself to play with but it is down in San Diego. The wheels/frame do not tilt independently. It would be really cool to see a design that does though, I have heard of a few trikes that do. Probably Bill Stites would be the man to ask!

There’s a guy in the Midwest who’s built some interesting tilting trikes. Google “Wayne Soohoo” and you should find him. He’s trying to market a conversion kit:

Vote Up0Vote Down  Reply
« The weekend in pictures
The bike/transit alliance: The good, the bad, and the experts »