“A regional breakdown showed the greatest drop [12%] in fatalities occurred in the Pacific Northwest states.”
— US DOT

The US Department of Transportation Secretary Ray LaHood announced today that National Highway Safety Traffic Safety Administration’s (NHTSA) projections show that between 2009 and 2010 traffic fatalities dropped to their lowest level in recorded history (PDF of report). The numbers come despite what the US DOT refers to as a “significant increase in the number of miles Americans drove.”

Interestingly, the US DOT press release (full text below) singles out the Pacific Northwest as showing the greatest drop in fatalities — which is also the region where traffic volumes are on a noticeable decline.

Below is a map showing the regional changes in traffic fatalities (California and Arizona showed the second largest decline (10.8%) and the Northeast tip of the U.S. showed an increase of 18%): 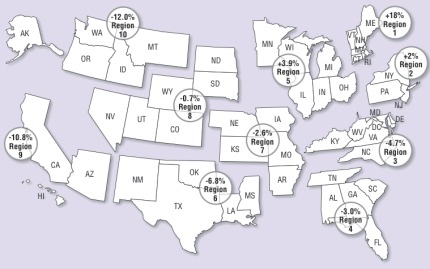 Read the full press release below:

TRAFFIC FATALITIES IN 2010 DROP TO LOWEST LEVEL IN RECORDED HISTORY

U.S. Transportation Secretary Ray LaHood today announced that the number and rate of traffic fatalities in 2010 fell to the lowest levels since 1949, despite a significant increase in the number of miles Americans drove during the year.

“Last year’s drop in traffic fatalities is welcome news and it proves that we can make a difference,” said U.S. Transportation Secretary Ray LaHood. “Still, too many of our friends and neighbors are killed in preventable roadway tragedies every day. We will continue doing everything possible to make cars safer, increase seat belt use, put a stop to drunk driving and distracted driving and encourage drivers to put safety first.”

According to the National Highway Traffic Safety Administration’s (NHTSA) early projections, the number of traffic fatalities fell three percent between 2009 and 2010, from 33,808 to 32,788. Since 2005, fatalities have dropped 25 percent, from a total of 43,510 fatalities in 2005. The same estimates also project that the fatality rate will be the lowest recorded since 1949, with 1.09 fatalities per 100 million vehicle miles traveled, down from the 1.13 fatality rate for 2009. The decrease in fatalities for 2010 occurred despite an estimated increase of nearly 21 billion miles in national vehicle miles traveled.

A regional breakdown showed the greatest drop in fatalities occurred in the Pacific Northwest states of Washington, Oregon, Idaho, Montana and Alaska, where they dropped by 12 percent. Arizona, California and Hawaii had the next steepest decline, nearly 11 percent.

“The decrease in traffic fatalities is a good sign, but we are always working to save lives,” said NHTSA Administrator David Strickland. “NHTSA will continue pressing forward on all of our safety initiatives to make sure our roads are as safe as they can possibly be.”

In 2009, Secretary LaHood launched a national anti-distracted driving campaign modeled on other successful NHTSA efforts to reduce fatalities, such as its Over the Limit Under Arrest and Click It Or Ticket campaigns to curb drunk driving and increase seat belt use. The U.S. DOT has launched a dedicated website, Distraction.gov, to provide the public with a comprehensive source of information on distracted driving. DOT has also hosted two national summits devoted to the issue, crafted sample legislation which states can use to adopt distracted driving laws, and initiated pilot law enforcement programs in Hartford, CT and Syracuse, NY.

NHTSA has also taken action to improve vehicle safety. The agency has urged automakers to swiftly and voluntarily report safety defects to keep the driving public safe. NHTSA has also encouraged the development and use of technologies to prevent crashes, such as electronic stability control, forward collision warning and lane departure warning systems. The agency also unveiled an updated 5-star rating system in 2010, which established more rigorous crash-test standards and began providing consumers with improved information about which cars perform best in collisions.

The U.S. Department of Transportation’s Federal Highway Administration (FHWA) has also been encouraging the use of Safety Edge technology — which reduces drivers’ risk of running off the road by shaping pavement edge — on new road and highway projects. FHWA has also promoted the use of rumble strips and cable median barriers to separate opposing directions of traffic to reduce the incidence of crossover head-on collisions.

You can read the full statistical breakdown from NHTSA via this PDF.

Perhaps someone should print this USDOT study out in a thick stack of paper and beat the CRC committee senseless (more senseless?) with it.

I’d like to think that the decline in traffic numbers that started up in 2005 might just coincide with that precipitous rise in fuel prices. Even if car addicts can’t imagine a life without their car they were taught that they would have to learn to drive less.

One of the many salutary consequences of the twilight of the automobile age….

I’d also be curious about the discrepancies here:
“lowest level of traffic fatalities ever”
“lowest level in recorded history”
“fell to the lowest levels since 1949”

Perhaps identifying when records were first kept would be a step toward clarifying that this almost certainly does not include statistics before the rise of the automobile.

I’m still heartbroken that there were 32,788 road fatalities last year. Just. Not. Acceptable.

This just in! Road fatalities down!

Last year Americans died on the road at the same rate as a packed 747 crashing and killing all aboard every 5.67 days, all year long.

This year, it’s the equivilant of 5.83 days between each jet going down.

We have a long way to go.

Another way to think of it-

I don;t see it in the article, but I assume the cause was that they wern’t wearing helmets

NW driving is getting safer? Could have fooled me.

Yesterday afternoon I witnessed an up-side down car on the Gresham-Fairview Trail @ the Division crossing. The flying car had landed on the pedestrian refuge island. Can’t find any news about it, so this kind of thing must happen a lot.

I assume at least the driver was hurt. There was an ambulance, 2 fire trucks, loads of cops. No mangled bicycle that I could see or anything else that would indicate it was caused in part through someone trying to cross the trail.

In the past couple of months I’ve been riding it, there’s been at least 2 drivers skidding their tires inches away from the driver in front through distraction or inattention at the crossings, which don’t have red lights, just like at the 205 path crossing of Division. At least the street is suitably named.

Ah I get it now. And some cheeky dude removed my ride from the bike hook on the MAX on the way to work this morning with that new policy thing. I kind of get that now I suppose. His office gear isn’t stiff like my road bike. The O has more on that.

These statistics do NOT include pedestrian deaths, however. I can’t recall if they include bicyclist deaths.

Just because people IN cars are safer doesn’t mean that those of us OUTSIDE cars are safer. Most of the reduction can be attributed to improved vehicle safety systems. It sure as s*** can’t be chalked up to better driving. Distracted driving is, if anything, far worse than ever.

And that doesn’t bode well for those of us not in enclosed vehicles.

And for some local analysis…Bob Albrecht of the Columbian reported yesterday that traffic deaths increased in Clark County (24 fatalities in 2010 vs. 14 fatalities in 2009) – a 71% increase! vs. a 5 year trend of reductions statewide.

A spokes person from the Clark County Sheriff’s Office downplayed this large percentage increase due to instability of small sample sizes…perhaps true … if a few large buses or vans crashed killing folks in 2010 vs. 2009. We will have to wait and request to see the data to judge for ourselves.

Clark County’s number was similar to the City of Portland’s total – 26 for 2010.

I think NW drivers vs say, California drivers are more polite. We slow down to allow people to merge onto freeways for example, something unheard of in CA. My brother-in-law was shocked at how I drive, making room for other drivers. Constantly checking my mirrors for bikes before making rt turns etc.

Didn’t some survey show that Portland has the politest drivers in the country.

I don’t know about any survey results, but drivers here do seem to be much more polite than back in Florida. As long as you’re in a car, anyway. (Actually, now that I think about it, they’re probably more polite to cyclists, too.)

The NE @ +18% is pretty scary. I wonder what the DUI statistics look like along side these.
Too bad we spend so much money on terrorist preparations and never enough on enforcement of existing vehicle laws, keeping uninsured and unlicensed drivers out of their cars, nailing cell phone users, etc.

I wonder if thee are still 3 or 4 counties in FL that have individual cyclist fatalities higher than the bottom 20% of the states? In 2009 just 4 FL counties killed 7.5% of the cyclists killed in the US.

This is good news. Congratulations to all parties who have helped make this happen — from citizen advocates to legislative activists to EMTs.

A few years ago I used to preface safety arguments with the phrase “We kill upwards of 40,000 people every year in this country on our roads.” I can’t be more pleased that I would need to cut this down to “upwards of 30,000 people” if I was making this statement today.

That said, it’s still a hell of a lot ourselves that we’re offing, mostly through events that are fairly preventable.

You can do your part to continue to bring this number down — report unsafe conditions to your local authorities.
Portland — report to safe@portlandoregon.gov or 503-823-SAFE
Oregon — report to askODOT@odot.state.oregon.gov

The squeaky wheel gets the grease.