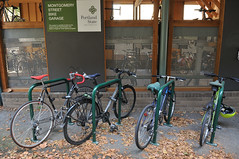 Portland State University’s location, facilities, and policies to promote options to driving alone are paying off. A survey released last week shows that three in four students and employees at the campus get there without a car. A press release about the survey issued by PSU proclaimed that, “Cars are alternative transportation for students and staff at PSU.”

44% of staff and faculty and 40% of students take some form of transit (bus, light rail, or streetcar) compared to 25% and 22% that drive alone. The survey also found that a full 12% of the entire campus population gets there by bicycle each day. (The survey was completed by 960 employees and 1,109 students. Survey respondents were asked to recall the transportation mode used to travel the greatest distance to PSU each day of the previous week.) 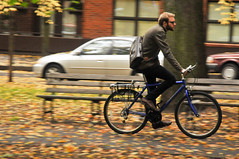 When compared to previous surveys, the rate of bicycling is growing faster than any other mode — it’s up from just 3% for students and 5% for employees in 2000. In that same time period, the amount of drive-alone trips (currently at about 23%) has dropped in half.

How does PSU do it?

During a recent tour of new bike facilities Stude showed off two new, fully-secured bike parking garages, a new “Bike Hub” bike shop, an enhanced bike lane on SW Broadway (a.k.a. cycle track), and other facilities that make bicycling comfortable and convenient on the downtown campus.

PSU spent $200,000 (along with a $50,000 grant from Metro) to convert an underutilized shed into the gleaming new Montgomery Street Bike Garage. The garage has secure, card-entry access, is monitored by video cameras, and fits 77 bikes. PSU has sold well over 100 cards at $5 month to use the facility…

A few blocks to the east is the new Harrison Street Bike Garage. With $150,000 from TriMet (due to its proximity to the transit mall) PSU was able to build this new, fully-secured park-and-ride facility that has space for 86 bikes…

Across from the Harrison Garage is the Bike Hub, the new home of the PSU Bike Co-op. This 2,000 square-foot shop sells a large selection of bike commuting essentials, has several stands for DIY bike repair, and also offers full-service bike repair. Stude tells us that in five years at their previous location they tallied 300 co-op members; but in the first year of opening the Bike Hub, they’ve now got about 1,500 members. “It’s been a resounding success,” he says.

In total, PSU has more than 2,000 bicycle parking spots (compared to 4,000 for cars). They’ve also applied for a League of American Bicyclist’s Bike Friendly University designation and their application is currently under consideration.

As a PSU employee, I’m certainly happy about these improvements. But I’m also still jealous of the OHSU Bike Incentive Program. If they can do it, why can’t we?

Kudos to PSU, Ian Stude and his predecessors at PSU Transportation and Parking — especially Dan Zalkow.

Zalkow was instrumental in changing the culture at PSU. A PSU planning school graduate, he turned the “Parking Department” into a department that acted on the realization that PSU’s real estate generates more value when used to educate students than when it is used to store idle cars.

Under Zalkow’s leadership, the renamed “Transportation and Parking” department used “feebates” (increased parking fees coupled with transit pass subsidies) to shift the mode split. Over time, he also invested parking revenues in bike infrastructure and car-sharing. These decisions shifted investments to non-car transportation while sending clear, consistent price signals that highlighted the fact that, in urban areas at least, driving + parking is the most expensive and least desirable transportation option, whereas transit and bikes are relatively cheap — for individuals as well as for landowners like PSU.

ian stude is a great guy.

I’m a PSU faculty member. I’ve never taken my car to work, even though that would have been very convenient for me, given that I sometimes have to leave class to drive to Salem to work at my other job. They make parking so inconvenient and expensive that I’d rather deal with riding to work, parking the bike, and then taking the MAX to my car, then picking the bike up the next day. Honestly, I’d drive those few times when I have to scoot on down to Salem, if it wasn’t such an inconvenience (finding the lot, and paying out the nose to park there).

PS. Have these parking improvements (and other: new staple racks) reduced the reported bike theft ‘problem’ – as reported 2 years ago.

Thanks, Jonathan, for the generous post. We’re very excited to share these new survey numbers that reflect a PSU’s commitment to sustainable transportation.

I want to point out that driving and parking at PSU is not unlike any other location downtown: the parking is limited, congestion is difficult, and cost is used as a method to manage demand. In our case, the price for parking is still below market rate, but designed to prevent the need to build more parking spaces. Instead, we can dedicate valuable real estate and capital investment dollars to building more classrooms, laboratories, and student housing. When compared to the cost of building new parking, our investments in bicycling and mass transit deliver far more bang of the buck, making these strategies both sustainably minded and fiscally conservative.

To echo SteveG’s comments: Dan Zalkow certainly deserves a great deal of credit as the architect for PSU’s shift to “alternative” transportation as the norm. If I’m the czar, he’s definitely the guru.

Many kudos should also go to our hard-working staff focused on bicycle programs, particularly Derek Abe for his work on bicycle parking, Clint Culpepper and the amazing Bike Hub staff, and our intrepid planning staff responsible for the transportation surveys: Rani Boyle, Emily Lieb, and Ben Weber.

Lastly, if you’re really into survey data and want to check out all the finer details, please visit http://www.pdx.edu/transportation/planning for online versions of all our survey reports.