Screenshot from the just-launched
PeopleForBikes.org.

A tri-fold promo brochure being handed out here at the Summit reads:

“Millions of Americans ride bicycles and recognize the economic, social and physical benefits. But, only a fraction of those who ride have stood up to help advance the cause of bicycling in America.

The goal of peopleforbikes.org is to gather a million names of support, to speak with one powerful voice — to let policy makers, the media and the public know that bicycling is important and should be promoted.

Whether you’re a commuter, a roadie, a mountain biker or just a casual rider, by uniting your voice with a million others, you can help build a national movement to improve bicycling in our country.” 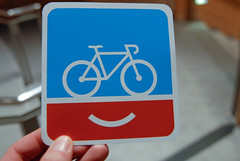 The campaign’s main icon (there are
different types of bikes).

This campaign has been in the works since November 2008 (we last reported about it in April 2009). Bikes Belong created the campaign with Minneapolis-based creative agency Colle+McVoy. The firm has previously worked on marketing campaigns for Caribou Coffee, the Minnesota State Lottery and others.

According to Bikes Belong executive director Tim Blumenthal, who I ran into a few minutes ago, People for Bikes will try to bridge the gap between the 250,000 bike advocates in America and the 50 million people who like to ride bikes, but who are currently not engaged with the movement. The tagline is, “Uniting a Million Voices to Improve the Future of Biking.”

At the People for Bikes website, people can sign a pledge, share the site with a friend, or upload their own bike story. The pledge states:

“I am for bikes. I’m for long rides and short rides. I’m for commuting to work, weekend rides, racing, riding to school, or just a quick spin around the block. I believe that no matter how I ride, biking makes me happy and is great for my health, my community and the environment we all share. That is why I am pledging my name in support of a better future for bicycling—one that is safe and fun for everyone. By uniting my voice with a million others, I believe that we can make our world a better place to ride.”

The aim of this initiative for Bikes Belong is to harness American’s love of bicycles and channel it into influence. It’s no accident that this effort is being launched just as Congress works to re-write our country’s transportation bill. The site’s Goals page reads, “Passion is nothing without a purpose. If we’re going to positively influence our country’s outlook on biking, we need to come together. We need your participation.”

I liken this effort to a MoveOn.org for bikes — which is something I’ve advocated for starting here in Portland. It’s something we sorely need in the bike advocacy movement and I hope it succeeds. Reps from Colle+McVoy that I spoke with said this is just an opening salvo and there is a lot more planned around this initiative. I’m headed to the official announcement now. I’ll update this story if necessary.

I like the logo, too. Of course for a project that started in 2008, that I just heard about it says it’s not off to a great start. Maybe that was the “soft opening.”

Grab me a couple of those logos Jonathan…

Awesome. Love it and will pledge my support tonight!

IMO, people for bikes/bikes belong often promote a black and white vision where “protected” bike lanes are always the best solution. I believe that bike boulevards/streets, enhanced bike lanes, advisory bike lanes, and even shared facilities are all useful in certain contexts. I can’t support an organization that has made a habit out of criticizing legitimate non-protected infrastructure improvements and exaggerating the risks of cycling outside of protected facilities.