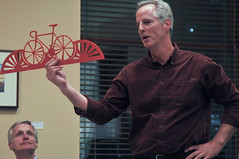 Great news for one of Portland’s busiest bikeways… After nearly three years since it was first announced, the Bureau of Transportation is set to begin installing elements of their Clinton Street Bike Boulevard Enhancement Project.

PBOT staffer Jeff Smith came to the Bicycle Advisory Committee meeting on Tuesday to share more about what you can expect to see on Clinton Street in the coming months and to explain the intent behind the project.

Unlike the many neighborhood greenway projects that PBOT is currently working on, this project entails adding artistic, aesthetic appeal to the Clinton Street bikeway. The idea is to essentially brand the street as a bikeway and create a more pleasant environment for all users. PBOT worked with local artists and the Regional Arts and Culture Council to come up with the designs.

There are six different artistic elements that will be coming to Clinton Street between the project boundary of SE 52nd to SE 12th:

“Street sign toppers”: PBOT will install metal toppers in the shape of bicycles to 70 street signs along the corridor. 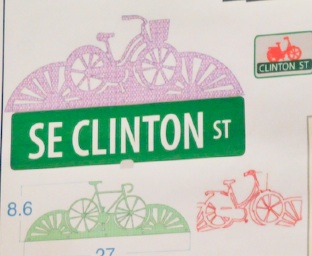 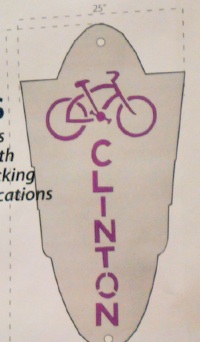 “Bike flags”: Three traffic poles along the corridor will be adorned with “half-bikes.” These will be actual bicycles, cut in half, refinished and powdercoated, and then hung horizontally. 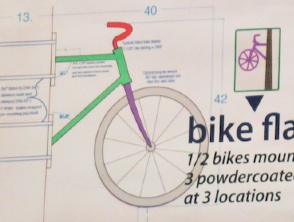 Pavement markings: PBOT will use paint (not thermoplastic) for a variety of new pavement markings. They are currently working with artists on two designs which they call “piazza mandala” and “bike down.” The markings will be similar in size to existing sharrows and will be placed at eight locations.

Bike corrals*: At SE 21st and 25th, PBOT will install a new version of their on-street bike corrals. These special corrals will feature a flower medallion and other artistic accents. (This element is being funded by the PBOT bike parking fund. They cost about $8,000 each.) 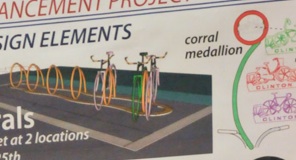 Smith says they are currently fabricating the elements and installation will begin later this winter. The new bike corrals could go in within a few weeks. If all goes according to plan, the project will be done by spring. PBOT will then evaluate what people think about the new street features and then decide how and if to use them again in the future.

The larger idea here is to then use a similar branding/artistic approach on Portland’s other bike boulevard streets like SE Spokane, Going, and so on. This project is being done with $28,000 from PBOT ($8,000 of which is for the two bike corrals) and about $10,000 from the RACC to pay the artists.

This was one of the five “languishing” bike projects we reported on back in August, so it’s great to see it finally becoming a reality. I’m really looking forward to how it turns out and hopeful that we can do more branding of other bikeways in the future.

Glad to hear this is finally about to be realized! Before anyone goes off again on how this money was spent – please note, this is a Regional Arts Council grant. The money was required to be spent to improve aesthetics, and the public was specifically solicited to help determine how to leverage that to provide visual reminders of the bike aspects of the corridor in an attempt to increase driver awareness.

From that perspective, I think PBOT did a great job. (full disclosure – I sat on the Citizen’s Advisory Committee for this project)

Kudos also to Kirsty Hall, who at the time was the staffer coordinating the CAC and setting up meetings. Kirsty left PBOT during the course of the project to pursue volunteer opportunities out of state, and I wanted to make sure that her contributions to the project were recognized as well.

They should sell those sign-toppers- like a commemorative version at the opening ceremony/dedictation/(whatever you call that…). Use the proceeds for further beautification. I’ll buy one!

I agree. They look good. I’d buy one also.

I’m worried too many people will like them, and they will be too simple to steal…

Create a more pleasant environment for all users ? Including motor vehicles ?
Does any of this discourage mv use on clinton ? I would trade all of this other fluff for that, because that is the most important issue.

Addition: the new speed bumps are already in place. So that is a little-bit of mv discouragements. So thanks for that. But there are still way too many cars cutting through on clinton, going way to fast, passing unsafely.

I’d like to see the same treatment for SE Ankney. Another well-used bike boulevard in need of some spit and polish.

The speed bumps on clinton are not a deterrent to mv traffic, if anything they make the street more dangerous by enforcing a vehicle action of speeding and slowing while trying to pass cyclists.

The street should be a 20mph corridor in order to actually make the route safer.

This is an issue with ODOT, and the city is working to try and get regional control of speed limits so that they can set the speed limit to 20mph on their “Neighborhood Greenways.”

While I understand from Matt’s comments that the improvements had to be aesthetic due to RACC funding, I still have to register my disappointment that no improvements are planned to discourage motor vehicles. I have begun to avoid the Clinton bikeway due to the aggressive and speeding motorists frequently encountered. The window dressing is pretty, but we need other and better remedies to actually make improvements for cyclists. I’m discouraged.

SE cyclist – that was probably the biggest item of discussion at the committee meetings, and the original impetus for the project. Will it work? Who knows. My personal feeling is that the project will be successful at reminding people that bikes use the street, but not at changing behavior. Driver behavior is a major concern both because motorists are using Clinton to escape congestion on Division, and because the upcoming Division repaving project will affect that entire area. I’m not convinced that this project will fully address that issue, but beautification projects have value too, and with the ridiculously low funding bike projects typically get, If PBOT can get any results over what is effectively an art program – more power to them.

Thanks for updating on this long in-limbo project. But what about the sidewalk widening at 26th and Clinton? Is this still part of the project as well?

Hart, it’s still in the mix. It still needs to be funded as a joint PBoT / Bureau of Environmental Services project, and needs to be fully designed with community participation, so it’s still off in a the future a bit.

How about instead of suggesting outlawing kiddie trailers we drop speed limits on all greenways and major bike arterials (I’m looking at you, Williams) to 20mph. And also, I want one of those toppers.

My concern is that having all this plastered all over Clinton Bike Boulevard will cause drivers to feel as if bikes MUST use that “bike path street” and stay off “their” Division or whatever.

Also, it would’ve been nice to get to vote on some of the er “artistic” options, eh? Just sayin…we’ll be lookin’ at them for how long into the future?

There were numerous public meetings for community input.

Also: better weld those wheels onto the half bikes or they’ll be gone quicker than donuts at the cop shop.

wow, these are great! I love the street as it is since there are so many streets and some “traffic circles” but anything to make it more fun looking is ok with me… more stuff to look at on my way home from the Clinton St Pub…

Are the street crossing improvements at 50th and 52nd still in the works? That improvement at 50th is what I’ve been looking forward to the most. You know what I mean if you have ever tried to cross there at rush hour.

Yes. We need to refine & vet the designs for both, especially since there’s no standard design for this type of crossing treatment. Additionally, the Woodward/52 crossing needs to jibe with the planned 50’s Bikeway design (on 52nd). So, we’re working on it, but it will likely come after the other Clinton elements are in place.

Greenlick should introduce a bill to allow cities to set 20 mph speeds on bikeways…if he’s so concerned with bike safety. That and another requiring that bike lanes be kept clear of leaves, gravel and other debris.

It’s a small thing, but I LOVE that one of the ornaments looks just like my Omafiets, complete with basket.

matt picio
[…] and with the ridiculously low funding bike projects typically get, If PBOT can get any results over what is effectively an art program – more power to them.

This statement suggests that PBOT is creating a bike project on “art program” funds, when in fact, per the figures in the article, PBOT is providing almost 3/4 of the funding! It sounds more like the RACC is getting art installations on PBOT’s (bike budget) dime.

I love them all! a coral is desperately needed around 26th/25th…

again, since they already paid for the artwork, i wish someone would tell me why PBoT chose to put sharrows rather than these mandalas down on the other bike boulevards, thus diluting the intended function of the sharrow on more crowded streets. the fact that federal money was available is not a sufficient answer.

discouraging people from driving on Clinton (& other bike boulevards) isn’t enough; they need to be prevented from driving more than a few blocks – with all homes accessible. I ride on Clinton to be one more cyclist using it, but I actually prefer Woodward, because there’s less through traffic. Nothing against the artistic enhancements & bike corals if it encourages more people to ride.