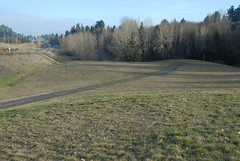 Portland City Commissioner Nick Fish announced earlier today that the City of Portland will assume an official leadership role in the Gateway Green project. It’s been over a year since the project has moved significantly forward, but today Fish said the City’s decision to step up with leadership responsibility and financial commitment will help “break the logjam.”

Back in August 2009, Governor Kulongoski selected the project — which will convert an unused, 35-acre parcel of land between I-205 and I-84 into a bicycle recreation area — to be part of the Oregon Solutions program. That was exciting news because it meant Gateway Green was a high priority project for the State of Oregon and that it would benefit from a host of resources; but there was one key piece of the puzzle that remained. In order for ODOT (as the current landowners) to move forward with a lease agreement, a lead agency needed to step forward to assume managerial, financial and legal responsibility for the parcel. Now the City of Portland is that lead agency.

“I think it’s a wonderful vision. We have momentum because of the Oregon Solutions process, it’s an under-served part of the city and it’s a chance to provide expanded off-road cycling opportunities in East Portland which is a win-win.”
— City Commissioner Nick Fish

In addition to becoming the lead agency, Fish said today that the City of Portland has agreed to “put money on the table to make this vision a reality.” “With the Mayor’s strong support, we have agreed to put in the FY 2013 budget the operating money to make this work.” Fish says they’ve committed to about $200,000 of ongoing operations and maintenance funding.

Fish also announced today that the City is committed to working with project partners to fund Phase One of the project and to oversee the construction management. Phase One, roughly estimated to cost $5 million, includes all the trails and bike-related amenities. 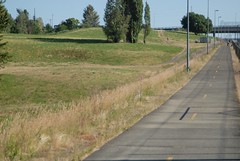 Looking south at the parcel.
The I-205 multi-use path is
on the right.

These big announcements mean the project will now move forward to the signing of a “Declaration of Cooperation” with all the project stakeholders. Fish staffer Emily Hicks says that the declaration will likely be signed in the next two months and trail construction could begin in 2012 with completion by summer of 2013.

From his office today, Commissioner Fish told BikePortland that credit for breaking the logjam goes to Bike Gallery owner Jay Graves and Metro Councilor Rex Burkholder, the two appointed “co-conveners” of the project. “They did a masterful job as co-conveners of this process and the mayor and I are now strongly committed to doing this.”

With so many other priorities competing for scarce dollars these days, I asked Commissioner Fish why he decided to commit the City to Gateway Green:

“Mayor Adams and I think it’s a wonderful vision, we have momentum because of the Oregon Solutions process, it’s an under-served part of the city and it’s a chance to provide expanded off-road cycling opportunities in East Portland which a win-win for me. There’s also strong community support and it allows us to establish leadership in an area we have historically been deficient in… It is one of the most promising things I’ve seen in a while.”

We first shared the vision for Gateway Green back in May 2008, when developer Ted Gilbert and parks advocate Linda Robinson unveiled their plans to the public. Learn more about Gateway Green at GatewayGreenPDX.org and browse our Gateway Green tag for previous coverage.

This could be a fun place for short down-hill courses, a pump-track, and skills features. But it is a grassy area surrounded by freeways, so not a natural or cross-country experience. People who enjoy Forest Park would laugh (or scream) if you offered it as an alternative to Forest Park.

Also, I would want to see extensive air quality data before having my kids spend much time exercising there. For example see:
http://www.infrastructurist.com/2009/07/09/freeway-air-pollution-is-so-much-worse-than-you-know/

I’m glad the project is moving forward, but why is the City the lead agency? If ODOT is really more than a highway agency (which is doubtful), and they own the land, why aren’t they putting up the money and staff to operate and manage the property in cooperation with the City and neighborhoods?

ODOT receives far more transportation funding than all the cities in the state combined, but spends a pittance on non-highway programs, far less than WSDOT, which is under similar restrictions on how they spend gas tax dollars.

To #1: Gateway Green is it’s own project. From Jonathan’s past coverage, I have not gotten the impression that anyone is suggesting that it is an alternative to Forest Park.

To #2: ODOT isn’t putting money in for operations because they likely have zero interest in creating an off-road bike park. Local agencies do. A more constructive point of view is to realize that ODOT is willing to allow the local agencies to use their land for these purposes, as long as ODOT doesn’t incur financial or legal liabilities. ODOT has no obligation to allow such use, so at least they are cooperating.

Kudos to Jay Graves and Rex Burkholder for getting this one moving, and to ODOT for making it possible.

People should know that although the site may be unused now, in the past it has been the subject of several plans – a proposed MAX repair yard among them, if I recall correctly. For all the restrictions of its awkward placement, the site is still a 35-acre chunk of land at the nexus of two freeways, light and heavy rail. Not exactly a pittance to give up, so it’s understandable ODOT had to think this one over before signing on. I’m glad ODOT has seen the value and unique opportunity this project represents.

We have heard opponents to cycling in Forest Park say the city should find other places for us, and name the GG. Other places are great, but when you hear it repeatedly in the context of Forest Park, you connect the dots.

Is it an accident that this announcement arrived just before the expected announcement regarding Forest Park? Could this be a bone tossed before the good stuff is denied or delayed? I hope not and that I am wrong, but let’s see.

I am excited for the opportunity, but share Franks reticence as I have done a bunch of riding out at gateway, but mostly for cyclocross training and echo the fear of the ol’ switcheroo by parks. This is however a great place to set up a permanent cyclocross type skils course, but nont nearly the space for a great xc trail.

I’m happy for this park to go forward. I share Mr. Selker’s concern, though.

Marcy Houle actually suggested as much about this park when we met (we struck up a conversation as I was riding my mountain bike on Leif Erickson). She said “but don’t you think you’ll be able to ride singletrack in the Gateway Green, instead of riding singletrack here in Forest Park?” As if the two were equivalent! I might as well say “we don’t need to protect land around Mt Hood because there’s Mt Rainier National Park up in Washington. Don’t need trails or forests here!” If this is really a ploy, then, it’ll be fairly obvious, and Commissioner Fish will deserve to hear from us riders.

This is kinda ironic because I used to go down to this spot and ditjump my bmx when there used to a jump and track down there in the 80’s.its a great idea to use it for sumthing bike oriented like maybe another trackk or sumthin..

To Frank # 1 and Charley #7. I think we need to be celebrating this success rather than reacting as if it is some machination to limit access in Forest Park.

While single-track is growing, it is still a small part of the recreational picture here in Portland. Most people don’t even distinguish between single-track and mountain biking, let alone all the other types of off-road cycling.

The ordinary Portlander might well question why we are making any expansion in on off-road cycling when it remains a relatively small share of urban recreational demand and there are other pressing and expanding recreational needs within the City. Many parts of the city are ill served by any parks.

So when the City leadership and Portland Parks announce a major investment in off-road cycling they are demonstrating leadership. When we react with speculation about how this is some sort of conspiracy or how this is just not good enough, it looks and sounds (perhap is) like single-track cyclists are a small group of special interest whiners who want it all there way now. We need to be supporting good leadership not constantly complaining and playing victim.

There is a lot conspiracy theories and self-victimization in our political culture today and think the public and our leaders are getting tired of it.