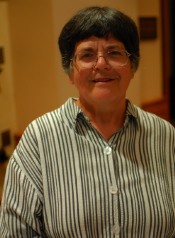 The Gateway Green project has taken a major step forward.

Friends of Gateway Green
— the non-profit group working to convert an ODOT-owned, 35-acre parcel between I-205 and I-84 into a bicycle recreation area — has announced that Governor Kulongoski has selected the project to be part of the Oregon Solutions program.

Oregon Solutions is a process that grew out of Oregon’s Sustainability Act of 2001. Projects under this umbrella are seen as having a high priority for the state and they are selected because they have a strong sustainability component and bring together a wide range of community stakeholders. Oregon Solutions helps the Gateway Green project in many important ways — from bringing its staff resources (to help find funding, etc…) to being a heavyweight facilitator to help navigate the extremely complicated route from vacant land to public recreation mecca. 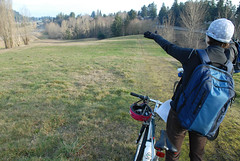 A view of Gateway Green.

The Governor’s selection of Gateway Green is also important because it comes with the naming of two “conveners” for the project; Bike Gallery owner and Oregon State Parks commissioner Jay Graves and Metro Councilor Rex Burkholder. The role of conveners to be high-profile, public champions of the project.

The Oregon Solutions approach will help bring together potential partners in a neutral and collaborative way to address issues and opportunities. By integrating and leveraging investments, the project has the potential to strengthen the ties between the public, private and civic sectors in your community.”

Director of Friends of Gateway Green, Linda Robinson, says this is a major step for the project. “We see this as a really big step forward in the process of making this a reality. Oregon solutions are very selective in what they choose, they don’t want the Governor to have a failure.”

Robinson also explained to us that the outcome of the Oregon Solutions process will be a “Declaration of Cooperation” between Portland Parks, Metro, and other agencies for the development, operation, and maintenance of the Gateway Green project. This is important because this intergovernmental agreement was one of several steps ODOT has required before they agree to hand over the land.

Robinson had already planned to present an update on the project today at City Council today. In other news, her group has finally acquired a $45,000 grant for the Gateway Green project from the City as part of one of seven projects funded in the East Portland Action Plan adopted by Council earlier this year.

Robinson says half of that money will go toward matching funds needed to begin the Oregon Solutions process, and the rest will be used to hire a consultant to begin the myriad of studies required of the project by ODOT.

As he announced the Oregon Solutions news at City Council this morning, Portland Parks Commissioner Nick Fish said “This is a very happy day” and he also spoke of Parks’ commitment to creating more off-road riding opportunities in Portland. “Gateway Green could be the mother of all off-road riding areas in the Portland region”.

Fantastic news! Great job to everyone involved with GG. I know this still has hurdles and hoops to deal with but this is a major step in making this happen!

I love these small good projects and would love them more if the people also spoke out against the one project that will undo the entire bike culture of Portland, and our bike and pedestrian safety.

Hey Jay and Linda, why no public statement in opposition to CRC bridge?

I’m guessing if you spoke out against the CRC the democrats in Salem would kill your pet projects.

Why the insistence on some bizarre hive mind think for anything cycling related? While I object to the CRC on a cost and benefits basis, it is not going to ruin Portland’s bike culture. Honestly, if they begin construction on the CRC are tens of thousands of bikey Portlander’s going to lay down their steeds and proclaim, “Screw it! I’m not pedaling anymore.”?

There are conservatives and pro-business types that ride. There are deeply religious people that ride. There are folks that are only interested in racing that ride. It’s called diversity. Not everyone needs to be an eco-warrior, Zoobomber, or freak bike builder to enjoy cycling on their own terms. Want to kill the larger bike movement? Just make it uber clubby, institute a “dress code” or insist on a lefty only dogma and you will exclude loads of people who can foster a mainstream image for our cause and influence those not reached by traditional bike advocates.

I should also point out that politically connected people like those you have mentioned can exert much influence quietly and behind closed doors. Are you sure that this isn’t happening? Not everyone has to scream with their hair on fire to get attention. That is too often the tool of the uneducated and powerless. Witness the ranters at recent health care townhalls. Making noise and getting attention but probably not changing the minds of those with the juice to get things done. But, a well written letter or five minutes of thoughtful and factual conversation with a governor or legislator probably gets more accomplished than months of whining on a narrowly targeted blog.

This project and the big name support it has garnered is a very positive step for cycling in Oregon. Kudos to all involved! I look forward to using the Gateway Green cycling park in the near future.

I did not ask the owner of the bike gallery to set his hair on fire or yell in protest of a $4 billion bridge. Sad you can’t actually listen to other people.

We already know: anti-CRC work goes on behind closed doors.

I love this Gateway project and knew about it long before it was on bikeportland. I still love it.

+1, Brad, that’s a well-thought out rebuttal to Mr Rowe.

Never mind the heavy-handed off-topic spew about CRC, this is great news for something that portland truly lacks– mountain biking!

I’m really excited about this.

Have shovel will travel....Continuity Consultant

After checking out a few around, I would personally like to offer to make the pump track for this area.

I have come to understand the subtleties involved in the shaping and proper riding of one.

This is to avoid a problem that is found in many skateparks. They are not made by skaters, and this is shown in the park.
The parks don’t tend to have the flow needed.

This is great news and I’m with Have shovel will travel. Hope they involve the public when this thing gets built.

Not meaning to pit greenway projects against each other (and I do realize the land ownership piece has a lot to do with it), but why push gateway greenway project over something like NP Greenway, which offers just as many if not more “solutions”. Not to mention it runs along the river, not a freeway. I’d love to see both project, but I’d like to see NP greenway happen first.