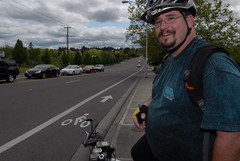 Whether it’s his amazingly well-lit bike, his tireless activism, or the fact that he rides around with pruning sheers in his panniers, Beaverton resident Jim “K’Tesh” Parsons tends to attract a lot of attention.

On one recent night he attracted the wrong kind of attention and was egged by two young kids in a car. But instead of getting mad or getting even, Jim got two new bikes for kids in need that will someday turn into many more.

Just as Jim was finishing up pruning some branches that he felt were impairing visibility on SW Hall Blvd near the Fanno Creek Trail, a car full of young men came “tearing out of the Albertson’s parking lot.” As they swerved across all five lanes of Hall Blvd, they hurled several eggs at Jim. Splattered with egg yolks and not sure what had just happened, Jim recalled, “I thought they were going to jump out of their car and beat me up.”

“At first, I wanted him to stand on side of road with a sign draped over his body that said, ‘I attacked a cyclist” and then I’d get a supply of eggs to throw at him.”

Acting quickly (and thanks to his helmet-mounted lights) Jim got their license plate number and called 911 right away. The manager of a local Arby’s also saw the interaction and acted as a witness. The police caught the driver soon thereafter and just after midnight that same evening, the cops came to Jim’s house to talk.

Unfortunately, the police said, the driver had dropped off his egg-throwing friends prior to being caught. According to Jim, the police offered the driver a deal: They’d reduce his punishment if he tells his friends to confess. They did. The next day, the boys turned themselves in. One of them will get $500 in fines, 20 hours of community service, and one year probation on the harassment charges.

The other egg-thrower said he was innocent because his eggs missed Jim. Facing a fine and other punishments, the cops told the young man that he could avoid all charges if he agreed to talk to Jim and find out how to make amends.

Jim recalls his initial urge. “At first, I wanted him to stand on side of road with a sign draped over his body that said, ‘I attacked a cyclist” and then I’d get a supply of eggs to throw at him.” But, Jim resisted the urge. Instead, he said the Lord guided him toward a different path. “I ended up asking for a letter of apology and two new bikes that I would donate to charity.”

Jim said he was impressed with the sincerity of the young man’s apology letter. As for the bikes, they were high quality Treks valued at about $400 (for both). Jim decided to donate them to the Community Cycling Center for their upcoming Holiday Bike Drive.

CCC staffer Patrick Loftus was working when Jim brought the bikes in last week. He says they don’t need any more bikes for the Holiday Bike Drive this year. Instead, the bikes will be sold in the CCC’s bike shop where the proceeds will go directly back into their programs — and will likely allow them to build up many more bikes for kids that need them.

Thanks so much, Jim! We appreciate your creative and generous approach to this situation.

K’Tesh (if you still go by that name): You rock! The only thing better would be if the egg-throwers came to the realization that they’d have a better life if they also took up bike riding (and used their eggs for omelets in the future).

Nice – glad that the bikes will go to a good cause.

K’tesh…you did well! Nice way to handle the situation. Because of the way it was handled, maybe those guys have come away from the incident not bearing any further animosity towards cyclists, or anyone else that could serve as a convenient target to throw food at.

That was funny. I suppose the guy felt he at least had to try.

Were they free range eggs?

“are those pruining sheers in your spandex or are you just happy to see me”?

This is such a great example of non punitive conflict resolution. Everyone wins in this scenario. Hats off to K’Tesh!!!

Karma, you don’t know what you started… I Shell honor your pun.

Don’t egg him on! You’ll just make him crack up.

Personally I think they got off real easy. They should have been egged.

that’s what I thought, but my post got deleted.

They were about $190.00 each. I insisted that they come from a bike shop, and not a big box store.

Thanks folks. I wanted to show the young man the kind of mercy that I was shown. Believe it or not, we all need the kindness of a Saviour.

I’m more impressed that the cops took the attack seriously and followed up on it. That’s a good sign.

Nicely done, Jim! This is actually a practice in restorative justice, for folks who are interested in leading similar exercises in their neighborhoods, schools and workplaces: http://www.restorativejustice.org/

Red Five
Personally I think they got off real easy. They should have been egged.

I can’t help myself… Sorry…

The yolk’s on them, and I think that everything ended Sunny Side Up.

This is funny. Down here in Tampa twenty people on bikes have been killed in the last few weeks, several intentionally, and nobody investigates. Here it is the dead bicyclists’ fault for not driving a Hummer. Any culpable suspects who do surrender are released and encouraged by authorities to go do it again. Portland is like another universe. Federal funds for bicycle paths are diverted to building driveways for county commissioners–and everybody laughs about it.

Good story– Well done Mr. Parsons. You’re a better man than I. Thank you for the inspiration to be better.

One bothersome thought… $400 (retail) worth of bikes will turn into how much at the CCC? Maybe it would have been better to just donate the cash. It would have been MUCH better if those two bikes had gone directly into the hands of kids that need them!

Has anyone forwarded this to local news? To me this is the kind of story that exemplifies the best of the season. Good on you, K’tesh- there are going to be two very happy kids thanks to you and hopefully the kids who threw eggs have learned a little something about strength of character too..

Way to turn a negative into a positive, K’Tesh!

Egg a car go to jail – egg a cyclist, get a break.

The three 19-year-olds each pleaded guilty Wednesday to criminal mischief. Besides the jail time, Trevor Lear, Dakota Magistrale and Albert Young must pay their victims more than $12,000.

Red Five,
They didn’t get off easy. They got off “Over Easy”.

KTesh you are an inspiration.

Impressive that you did not get all over-eggcited and were able to get their license plate.

I was egged earlier this year while biking on NE Glisan just west of Cesar Chavez Blvd. I got the license plate number but when I called the police they said that since I didn’t see the driver, they couldn’t do anything, and wouldn’t be filing a report. It was upsetting and and also a bit unsettling: I was assaulted while riding, which was a bit scary. But also, egged. Which maybe at first blush seems funny, except the joke (yolk?) was on me. Having the police not take it seriously was an additional slap in the face. Anyway, thanks for listening, Internet.

Glad to hear justice was served in this case.

Something similar happened to me. I got the name and badge number of the officer who wouldn’t do anything about it and sent a certified letter to the Chief of Police, in which I said that if nothing was done I would send copies to the local media.

I got hit by a handful of pennies thrown out of a black SUV on Barbur. A few hit my belt, thank goodness, but the rest left crescent-shaped welts across my side. The cops were no help, which, I agree, felt like a slap in the face.

Ahh youth: so wasted on the young. I think all involved have learned important lessons.

Well done Jim and Beaverton PD! Glad you weren’t harmed. Excellent eyesight too, getting the lic. plate before they sped off.