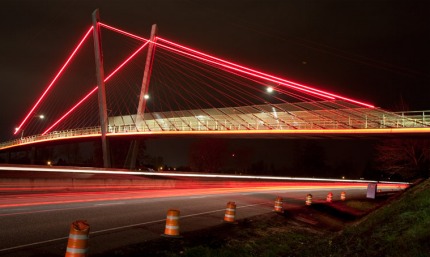 The new Delta Ponds Bridge in Eugene in all of its “visually strking” glory.
(Photos: OBEC Consulting Engineers)

“The high level of use we’re seeing after only being open for one week in mid-November is remarkable.”
— David Roth, City of Eugene Associate Transportation Planner

The City of Eugene — where a higher percentage of people commute by bike than in Portland according to the most recent U.S. Census numbers — is celebrating the opening of the Delta Ponds Bridge. The $5.6 million, 1,000 foot long bridge crosses Delta Highway just north of Valley River Center and serves as a key link in Eugene’s paved trail system.

The bridge connects the well-used Ruth Bascom Riverbank Trail in the Valley River area to the Cal Young neighborhood in north Eugene.

David Roth, Associate Transportation Planner for the City of Eugene says the new bridge creates a direct connection between a large residential area and Eugene’s world-class riverbank path network. Reached via email today, Roth said that the bridge is not only a key in Eugene’s recreation and transportation network, but it also, “Serves as a visually striking landmark for the city”. How are people liking it so far? Roth says, “We were confident the bridge would be popular among community residents, however the high level of use we’re seeing after only being open for one week in mid-November is remarkable.”

The new bridge was paid for in part by a $2.25 million grant from the Federal Highway Administration through the Transportation Enhancements program (that is, ironically, now coming under fire from AAA and amid talks of an earmark ban in Congress). Learn more about the project on the City of Eugene’s website.

Quite enviable. I wish we had more non-auto bridges spanning our freeways and other obstacles.

I agree with you Nick.

You comment made me want to remind us all of the Portland project completed only a couple of years ago on the Springwater Corridor, creating bridges across 3 crossing obstacles (a busy and difficult-to-cross roadway and two railways, if my memory serves me correctly). So we have celebrated successes, but that doesn’t mean we can’t continue to work for more.

Hey, not to try to scrape your readers or anything, but I wrote about it, too!

Nice, though sort of a knock-off of Santiago Calatrava’s bridges…

“where more people commute by bike than in Portland” — more people, or a higher rate of cycling (per capita)? I would have a hard time believing the former.

yeah, the percentage is higher, not the actual number: 10.8 percent in Eugene say they commute primarily by bicycle.

The new bridge is close to my home. It is so beautiful and the lighting is fantastic. We are going to be using it a lot for sure.
Vote Richard Hughes for GEARs President.
http://eugenegears.org/2010elections

Eugene Bicyclist, Your article didn’t get quotes from Dave Roth…I like his energy.

Thank You bikeportland.org for including the City of Eugene in your blog.

This seems like it would be a nice design for the new Sellwood bridge, no? ‘Cept we’d be poseur copycats; but really, there’s only so many ways to do a bridge.

Nick, post #1, we missed the chance with the bridge from Sauvie island a couple of years ago
BTW, where are the numbers on the posts? It made it easier to reference other writers.

With the new “reply” feature you don’t need post numbers.

I remember reading about this bridge in the past around the time of the discussions about possible re-use of the Sauvie Isl Bridge at Flanders St. It represented a very important transportation link between two areas in the general area.

Glad the bridge is done and people are enjoying the use of it. As to the aesthetic design on the bridge, well…definitely a break from the tradition of graceful curvilinear arches.

Oregon’s most bike-friendly city strikes again! I love this bridge and its implied dominance over the highway below. This should help connect these two neighborhoods like never before, can’t wait to see what’s in store for the future in Eugene.

Muchos Kudos to David Roth and all of Eugene’s Transportation and Planning staff.

Now that it’s in use and surely depreciated, maybe we could make them an offer and buy it to put on our i205 path over Division before someone gets killed.

The I205 path should go under Division. There is room next to the tracks. In fact, if you look at the satellite view on Google maps, you can see that there is already a path there, but it’s not open to the public. It would be way cheaper to go under.

Paulie
The I205 path should go under Division. There is room next to the tracks. In fact, if you look at the satellite view on Google maps, you can see that there is already a path there, but it’s not open to the public. It would be way cheaper to go under.

Correction: there is a path partially there. It stops under Division. But still could be completed on a shoestring, relative to a bridge.

This is great! now people have somewhere to stand when the river floods