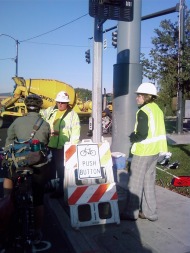 This morning, crews stood at the
signal to make sure people knew
it was there.
(Photo: Kristin Bott)

As I reported yesterday, the new bike signals installed on Broadway at N. Williams have been turned on. Unfortunately, they weren’t quite ready for prime time and there were safety concerns that became apparent once everything went live. This morning, PBOT shared a list of changes they plan to make at the intersection immediately.

The issue of most concern to PBOT was that road users (mostly people on bikes) were not aware of the new bike signal. This is serious, because with the bike lane now to the right of two right-turn lanes, there’s potential for collisions if people do not comply with the signals (learn more about how the new signal works in this post).

I spoke to City Traffic Engineer Rob Burchfield via telephone today to learn more about the changes.

When the signals went live, people on bikes had to push a button to trigger it. That has now changed. Currently, the signal is set to be triggered each cycle whether a bike is present or not. Within the next day or two, Burchfield says new detection loops will be installed. The new loops will detect a bike when it’s 80-feet away. The detection will also be able to extend the green — from about 8 seconds to as much as 12 seconds — if more than one bike is present. In addition, Burchfield says the bike light is now timed specifically to bike speeds to be in coordination with the light at N. Victoria Ave. to the east. 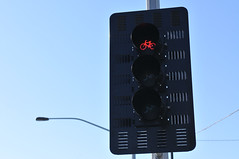 The displays will be larger and
the frame will become yellow.

As I mentioned in an update yesterday, burma-shave style signage is being installed to point out the new signal to people on bikes. Expect to see a “Bike Signal Ahead” and “Use Bike Signal” signs as you approach Williams.

PBOT will also change the color of the back plate on the main signal head (there are two signals, one is curbside and the other is on the main signal mast). Currently black like the other signals, PBOT will install a yellow back plate so it stands out from the others. They will also install larger lens displays on the signal, changing out the 8-inch diameter displays for 12-inchers.

Several people have asked about a larger, illuminated “No right turn on red” sign similar to the one currently used at the bike signal at NE Oregon and Interstate (near Peace Park). Burchfield confirmed that one of those is on the way. Unlike the NE Oregon/Interstate sign, this one won’t flash. It will just turn on when the right turn lanes have a red.

In addition to these engineering and hardware changes, Burchfield says he’s got staff from PBOT’s Transportation Options Division (the marketing wing of PBOT) trying to think of a way to do more outreach to let people know about the new signal.

I asked Burchfield why the intersection went live before all these things were done. He said it’s an example of how PBOT is striving to implement traffic solutions that are commonplace in Europe, but are not the standard here in the states. It’s making Portland a “world-class bike city in an American context” issue that bike coordinator Roger Geller has talked about in the past.

“There is no standard here for the signage that’s required for a bike signal,” Burchfield says, “so we have to borrow from what we know from Europe. To be honest, it’s fairly challenging.”

Will you get a ticket if you don’t stay in the bike lane?

yes, the law says if a bike lane is present, you must use it…. but i highly doubt a cop is going to pull someone over for riding reasonably in one of the other lanes. it’s sort of like jaywalking. yes, it’s illegal but it’s rare that a cop will bust someone for it.

All of this just brings into focus that our current “mandatory sidepath law” must be clarified and/or/better yet eliminated this session. as PBOT looks to create more bike-specific infrastructure, we should not have laws on the books that create the confusion/perception that people on bikes MUST use them.

I know there is still a lot of work to be done, and yes, it could have all happened at once, but part of me loves watching this process and seeing PBOT’s dedication to getting it right and making it safe for everyone.

Jonathan, I’m sure a lot of credit is due to you as well, if it weren’t for this kind of exposure the city could have easily just flipped the switch and called it a day.

I love this, although can anticipate motorists complaining about why the bike signal should be active regardless of bicycles being present. But this is a really good educational strategy IMO. There’s enough bikes in PDX that we deserve a signal 24/7!

I rode through there this morning, just to check it out. The workers were extremely helpful and informative about the signal when I asked about the timing. It seems very well thought out and it does eliminate bicycles having to cross a lane of traffic eager to get on I-5. I’m giving it an overall thumbs-up.

That said, Broadway itself is still a suicide mission East of the freeway. I had to navigate un-signaled right-hook cars and two wheels, or entire cars, in my bike lane on my way to the new bicycle utopia intersection. I’ll stick with the side streets thanks, where merely dozens of cars have an opportunity to hurt me, rather than hundreds.

Re: Bicycle lanes and the law

I’ve always read ORS 814.420 and 430 as “You must use the bicycle lane when it is present unless there is debris or other hazardous condition preventing the use of said bicycle lane.” The criteria for what constitutes a hazardous condition is outlined, but far from strict or complete. Personally, if I feel that I’m safer outside of the bicycle lane, I go ahead and take that lane. I have yet to hear of a court case where this particular statute has been tested, but it is a Class D traffic violation. Just be aware of the standard you’ll be held to.

the mandatory sidepath law, ORS 814.420, also includes an exception where the bike lane has not been certified safe through a public hearing process.
http://taking-the-lane.blogspot.com/2010/02/subparagraph-two.html
obviously there has not been a public hearing on the specifics of each and every (or really any) bike lane in this town. but the city attorney has taken the position
http://www.scribd.com/doc/26579905/Moline-Ltr-112309
that the process of adopting the 1998 bicycle master plan, which includes most of the bike lanes you now see, was itself a sufficient public hearing for purposes of the statute. in his opinion letter, he specifically references the design guide, appendix A, which in turn references MUTCD.
at section 9C.04, the MUTCD says
http://mutcd.fhwa.dot.gov/pdfs/2009/part9.pdf
quote: “a through bicycle lane shall not be positioned to the right of a right turn only lane or to the left of a left
turn only lane.”
thus the facility on broadway at williams, which was not listed in the 1998 bicycle master plan, and which does not conform to the specifications adopted in that plan, should not be covered by the exception at 814.420(2), and it should be legal to take the lane.
your traffic court judge may differ.

This from ORS 814.420 seems to address that question. Bikes must use the bike lane unless (e) Continuing straight at an intersection where the bicycle lane or path is to the right of a lane from which a motor vehicle must turn right.

Am I reading it wrong?

Thanks for the update on the signal.

much simpler and more elegant, thanks. subparagraph (3)(e) should certainly apply at some distance the judge would agree is reasonable. the farther back you take it, the more you would have to rely on sub (2).

12 seconds seems ridiculously low for rush hour when there are ton of bicyclists going down Broadway. I imagine this will lead to bike traffic jams in the bike lane, causing people to just take the lanes to move faster.

This road is normally quite busy with bikes. The last couple of days I drove through that intersection several times and never saw a bike. I’m guessing they have been avoiding this area because of all the construction. Next summer it will be a big test when there will be many bikes waiting for the signal.

I’m happy they did this. I can’t imagine anything being worse than what it was before. It frustrates me that it took so many years, and so many accidents before it was fixed.

“They will also install larger lens displays on the signal, changing out the 8-inch diameter displays for 12-inchers.”

I dont have my MUTD next to me, but wasnt 12 inches made standard in 2003 for signal displays….?

Also, engineers have a pile of devices available to them to use when a new signal is not finished. This is what should have happened:

1)Install bike signals, with 12 inch displays, yellow back etc, and put a bag over them so they’re hidden.
2)Install buttons and induction sensors
3)Install signs, including “new signal ahead” (bag them until ready)

Only once everything is in place, should step 4 happen:

4)Re paint the lines.
Both removal of old lanes and painting of new lanes can be done in a few hours over night.

And as soon as thats done, remove bags, active signal.

None of that dangerous halfway stuff.

Can you imagine highway engineers allowing car infrastructure to be halfway ready?

I think Steve is right:

This from ORS 814.420 seems to address that question. Bikes must use the bike lane unless (e) Continuing straight at an intersection where the bicycle lane or path is to the right of a lane from which a motor vehicle must turn right.

although I could see somebody trying to argue that since the cars can’t turn right at the same time as bikes then it wouldn’t apply, but that’s not outlined in the statute…

I couldn’t quickly find the requirements for lens size. Agreed on process, the implementation of this signal apparently was not as rigorous as it would be for a general traffic signal.

re: car infrastructure – Rob Burchfield has a good point, the US has no procedures for this, so in the areas where the general rules don’t apply, they’re making this up on the spot. Additionally, when the car infrastructure rules were written, there was noncompliance and confusion until the standards were settled. Also, there are lots of areas in the MUTCD where the standards are not followed. For example, lane closures – the state of Virginia follows the MUTCD to the letter, but few other states do. Oregon lane closures are particularly bad, and are rarely signed or coned in accordance with the MUTCD – at least not the older version of the MUTCD.

Spiffy (#15) – I agree with your reading. The statute doesn’t stipulate a certain signal state, only lane position. Since these lanes are positioned to the left of the bike lane, a cylist would appear to be within his or her right to move into the right-most (or left-most, since it’s a one-way street) through lane until clear of the intersection.

And with the new controls, NE Broadway becomes my favorite way to get downtown. You can really get a good head of steam on Broadway and keep up with traffic and traffic lights. I don’t think that westbound is any worse than the other bridges in terms of exposure, etc.. I’m a little more cautious eastbound through 24th as there are a lot of folks making right turns, etc…