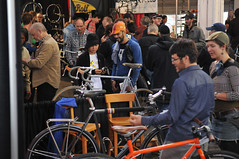 A big crowd turned out on Saturday.
(Photos © J. Maus)

Last weekend’s Oregon Handmade Bicycle Show (see my slideshow and mini-report here) made it clear that our region’s custom bike building industry is stronger than ever.

Tony Pereira / Pereira Cycles
Tony staffed his booth, proudly wearing the fantastic new suit that he won as a prize for winning the Constructor’s Design Challenge at the Oregon Manifest. Pereira sold the bike that won that competition (to help finance a move and setting up a new shop) and the centerpiece to his booth at the OHBS was its replacement.

The bike is Pereira’s ultimate city bike and it’s very similar to the Manifest-winning rig “It was great to take a design I really loved and just tweak it a little bit.” The well-known integrated u-lock (that also locks the steering column) got a bigger shackle and the front rack has a new bag (made by Elias Grey of Lemolo Bags). The bag has a nifty, integrated wire cable that loops around the rack for security. Overall, the bike is a perfect complement to Pereira’s bespoke three-piece suit. 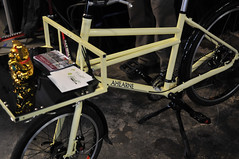 All the benefits of a Cycle Truck,
now in a smaller package. 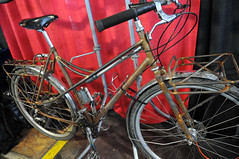 Also, in keeping with his creative and exploratory design inclinations, Joseph showed what might be the world’s only mixte-touring-mountain-bike-29er. Joseph said he’s kept it unpainted so he can continue to tweak the design (for instance, he added the top tube gussets to stiffen it up). The patina (rust) on the frame came after he rode it to Astoria and back this past summer. 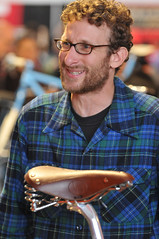 Jonathan Littleford / Littleford Cycles
It was a pleasure to meet new builder Jonathan Littleford. Jonathan, 36, is a UBI graduate who has been building bikes for two and a half years and finally decided to take the plunge into doing it full time. “It’s the first excursion into actually doing what I love for a living,” he told me.

Speaking of excursions, Jonathan’s bikes are perfect for them. He says he’s trying to coin the phrase “journey bike” and describes his bikes as “capable, practical, and durable.” He showed a well-appointed, steel, touring road bike with integrated racks (as in, not screwed to the frame, but welded directly to it), bar-end shifters, and S&S couplers (to take apart for easy travel). Also a landscape and portrait painter on the side, Jonathan is the rare builder who actually hand-paints his bikes.

Rob English / English Cycles
Rob English is a Eugene builder whose day job is as a product engineer/tester with Bike Friday. Rob is also a highly decorated bike racer who has won state titles and set records in a number of disciplines. His bikes mimic his diverse riding abilities. He showed off a very diverse line, from a superlight road bike and an aero-time trial machine, to a very pretty 29-inch wheeled mountain bike. Of particular note was his “Project: Winter” bike. 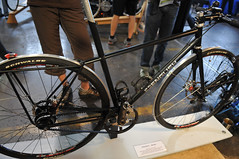 Made specifically with low upkeep in mind, Rob says he’s put 3,000 miles it without doing any maintenance. That’s possible thanks in part to the Gates carbon belt drive and minimalist construction. To allow installation and tensioning of belt, the bike has a nifty “split rear dropout” and an eccentric bottom bracket. Other highlights are a rear rack built right into the frame with the tubes set below the wheel for lower center of gravity.

Mitch Pryor / MAP Bicycles
Mitch is a rising star. Just a few years in the business (after working under Joseph Ahearne) and he’s already won “Best City Bike” at NAHBS (2009) and more recently, he’s riding a wave of buzz after a very positive review of one of his bikes by the esteemed Jan Heine of Vintage Bicycle Quarterly.

Mitch has really nailed a niche for his randonneuring/touring/all-day road bikes. The key, he says, are the 650B wheels (which are smaller than conventional road bike wheels (700c), but larger than mountain bike wheels (26-inch)) and 42mm tires (which are fat in road bike terms). That combo, Mitch says, “Takes the edge off, without being slow.” With some positive press and the sheer beauty and quality of his builds, Mitch is making these in batches of 10, and all the slots are full.

Paul Johnson and Jeremy Neal / Blaq Designs
Paul and Jeremy just moved to Portland after making their bags in Ohio for the past three years. They specialize in backpacks and messenger bags, but they’re a custom shop so they can put together just about anything. Case in point is the prototype bag they made for the cargo bin of the Joe Bike Shuttlebug.

Jordan Hufnagel / Hufnagel Cycles
Jordan was my biggest surprise of the show by far. Last time I checked in on him he was building beautiful track and road bikes. There’s nothing wrong with those, but they’re pretty standard fare in the custom bike world. At the OHBS, he unveiled an entirely new look and direction for his company. I called it a “gas station aesthetic” and Jordan concurred. His rendition of an urban, fat-tire cruiser was stopping people in their tracks.

The bike has a pretty standard main frame geometry, but Jordan has added some very distinct touches. There’s a springer fork, two sweeping tubes in the front triangle, a set of Grand Bois tires (like Mitch Pryor uses), Paul calipers, and vintage-styled cranks and pedals. Jordan says the bikes definitely have a 1950s feel to them. “I’m a white t-shirt, jeans, and Converse type of guy… these bikes fit where I’m at personally right now.” Jordan has always had a keen eye for design and style and this is an exciting new direction for his bikes.

Here are a few other tidbits from my OHBS notes… 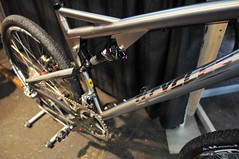 Dave Levy of TiCycles is working on a licensing deal with Santa Cruz to use carbon-fiber, Virtual Pivot Point (VPP) rear ends from their Blur full-suspension mountain bikes. A titanium front triangle built by Dave with a Blur carbon fiber rear end. Sounds like the ultimate mountain bike to me.

Greg Morris of Milholland Bicycles reports that his business is doing great. He said his good fortune comes from having a few solid dealer relationships and a relatively quick turnaround time. I’ll bet his impeccable steel road, touring, and city bikes don’t hurt either. 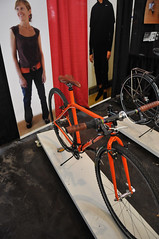 Rob Tsunehiro of Tsunehiro Cycles had one of the most creative booths at the show. He displayed two bikes adjacent to full-sized photographs of their owners. One was a woman from Bend who he made a flat-bar cyclocross/commuting bike for and the other is a Portlander who wanted the ultimate commuter bike for his daily jaunts on the Springwater.

Hope you enjoyed learning a little more about the amazing wealth of talented builders we have here in Oregon. I’m already looking forward to next year’s show! In case you missed it the first time around, you can see more shots of all the builders above in my OHBS slideshow…

Jonathan – I beg to differ about Littleford’s “integrated” racks. They are bolted on! Look closer. Honestly, it’s one of the most surprising, unique, and perhaps even innovative things I saw at the show. And he was extremely humble about it. Sexy!

Oh, um, and look at the hand-painted “fade” on the lug-linings on the commuter. Sigh.

To add to Caroline’s comments: I spoke to Jonathan about the rack design and he said that they are actual structural elements due to a “sleeve” inside the tubes of the rack. I am not sure I have it right but even though they connect with a screw they are much stronger. The bikes are beautifully built and conceptualized.

A lot of these folks probably have plenty of business. With this in mind it was very cool that they participated in the show. To me it shows great community spirit. It is a way of giving back to the Portland bike scene.

I had read about many of the bikes via websites etc. but this was the first time I was able to see some of them up close in person. There aren’t too many opportunities to do this since many of the shops aren’t exactly open to the public and I’m not actively shopping for for a custom bike.

Good stuff and thanks to everyone for making this happen.

Thanks for the coverage Jonathan. I hadn’t displayed at the OBCA show since the first one in 2007. It was good to be back at a local show, getting my bikes in front of people that hadn’t seen them before and reconnecting with people I hadn’t seen in a while. Also great to hang out with the other builders and see/hear what they are up to.
Lots of fun sporting my new suit too!

Really Tony, your bikes are really nice, but that suit is awful!!!! Stick with your strengths dude.

Tony is the best dressed man in cycling next to Gary Fisher!