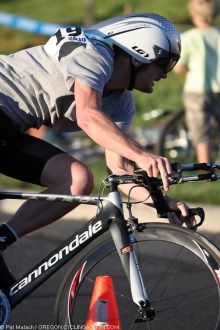 CyclingNews reports today that embattled professional bike racer Floyd Landis will start the Cascade Cycling Classic in Bend this week. In addition, CyclingNews reports that ABC’s Nightline television show will be following him for an upcoming episode. The presence of Landis and ABC news cameras means the 31st edition of the race — and its host city of Bend — will attract national attention.

Landis had his 2006 Tour de France title stripped away after he failed an anti-doping test. Earlier this month, Landis spilled his guts to The Wall Street Journal about what he alleges is a culture systemic doping in the sport of cycling. Most notably, Landis accused global icon Lance Armstrong and several other teammates of knowingly using illegal, performance-enhancing drugs. Armstrong has denied the allegations and a federal grand jury has begun an investigation.

The national spotlight will only add to Bend’s profile of being a premier host of high-profile, national bike racing events. Just last week USA Cycling announced that Bend won the rights to host the 2011 and 2012 Marathon Mountain Bike National Championships.

The man who took down beloved American hero and cancer survivor, Lance Armstrong.

…who is also a doper.

Love me some Super-Floyd! That comeback ride a few years back on the TdF. Amazing! Can’t wait til we have the Doper-Olympics: anything goes!

If you believe that ABC Nightline will bring positive attention to Bend as a cycling mecca, you are whistling down a wind tunnel!

These media outlets don’t care where they land, it could be Leadville, they will only be here to report the curiosity of a snitch-has-been trying to ride his bike in a race after he dropped an atom bomb on the world of cycling. And Floyd is here to rub cycling’s face in it, and ABC is here to see that happen.

It’s another of those gossip scoops, passed off as news.

Very, very sorry that the race director couldn’t pull the plug on Floyd and his media entourage. Bend does not deserve this voyeuristic exposure.

The guy who lied about doping and received donations towards his defense fund.

The guy who wrote a whole book to back up his lies.

The day he returns those donations and refunds the money from his book sales is the day I consider rooting for him.

This is not the person you want to use to promote your event.

A “culture” of doping in cycling? Unbelievable, next your going to tell me that baseball and football are riddled with steroid users

Seriously, so long professional sports have millions on the line, people will dope.

They prefer to call them “rejuvenation” or “anti-aging” centers. Anyone can go in and legally get performance enhancing drugs, unless you’re a sportsman in a league where the substances are banned.

Don’t forget Greg Lemond, who’s loving this and is gladly complying with subpoenas to supply the Feds with incriminating documents he acquired from his lawsuit against Trek. They’re both just trying to get even from what they perceive as Armstrong hogging all the limelight for years along with lucrative financial rewards.

Any publicity is good publicity, for Bend, regardless of Landis’ past doping transgressions. He’s still an accomplished cyclist, though disgraced in the eyes of most uninformed fans of professional cycling.

Floyd Landis is to up and coming racing events what Sarah Palin is to environmental rallies.

Lance Armstrong – the best doper EVER.

I defended Landis until he dropped the dime on his friend Zabriskie. Unforgivable.

The race director at the Cascade Classic is quoted as saying he doesn’t believe, in this case, that any publicity is good publicity, but that his hands were tied because Landis is licensed and claims he wants to ride.

It sounds like he feels a little bit painted into the corner over Landis. That’s the name of the game in our media culture. Folks with no shame consistently manage to get their fifteen-plus minutes of fame, regardless.

I think that there is a job and a life for Floyd in the wonderful world of fast food, I won’t be looking for him in Bend, hard to believe that the organizers brought him in.

He’s finished in cycling and a grand liar.

This lying, doping loser will only detract from a great event. You might as well bring in Bill and Monica to talk about cigars and abstinence while your at it!

The notoriety of Flandis is what will attract more attendees to Bend and local businesses.

Regardless of what you think of Landis’ past actions, Armstrong is currently in the same boat. He lies and lies to the general public until the Feds make him tell them the truth, under threat of prison. Will this destroy the Lance Armstrong foundation? Who knows, but cancer research will still march forward.

I’d rather watch the neighborhood kids race around the block than spend my money and time to attend an event with this doping liar. Great PR.

The Landis story is depressing. I agree with #6 anonymous, he owes a lot of people some money…and an apology. Doping is one thing, generating sympathy and fraudulently collecting money is another.

Let’s just remember what Landis did to Lemond when he exposed the childhood abuse as part of his doping trial.

Such an upstanding human being.

Not only is Landis a former doper and a liar, he appears to be one of those “interesting” people that thinks Lycra cycling shorts and a baggy t-shirt are a good combo (with an aero helmet, no less!). 😉

look he’s flip’n us off in the pic. LOL!

His team, Bahati Foundation, ceased operations effective immediately according to a press release yesterday. In the wake of this whole Floyd induced scandal, sponsors are pulling out leaving the team with insufficient financial backing to continue.

No team, no jersey.

commenter Lady Jane has the 411.

Too bad the Cascade big wigs don’t see the truth behind the sympathy mask. Floyd brings his circus to town! WAHOO

They didn’t ASK him to come- Landis is a racer w/ a valid racing license. He can race where he chooses.

Has anyone else noticed how ABC news is starting to look and act like Faux news ?

Hmmmmm wonder why RadioShack, “isn’t nearly as strong this year?????” Hmmm what could be the reason?

How to a man, the Entire team isn’t performing? Remember last year they had everyone close to the podium! Not even close this year!

Yeah you don’t get it Paulie! Half or more of Astana is now RadioShack. Lance, Levi, Kloden all are flat in the mtns. Get it???? Leading Team? That’s a bozo prize! RadioShack was touted as Lances best team in the mtns, LAUGH! Landis is teaching Lance a lesson, no matter how much money, fame, percieved power it can all go away and your just a man like every other man. Pure coincidence, higher doping scrutiny, lower performance!

Uhh, Thad, you don’t get it! Maybe you weren’t watching but Lance would be in contention for the podium except for the crashes (not his fault). Also, #1 team in the tour? Sponsors will kill to get that, it’s no Bozo prize. Doping scrutiny has been good for years, keeping pace with doping tecniques and Lance has been clean every time. In fact, no professional athlete has been drug tested more than Lance, and come up clean 100 percent of the time. Get over it.

Floyd, on the other hand, doped, then got caught, then denied, then sued, then admitted, then complained, then accused others. He is an admitted LIAR!!! Rember, this article is about lying Floyd, not Lance!

RRR (#24) has it right; Chad doesn’t invite the racers personally and doesn’t deny entry if they’re not breaking rules (currently). And it’s a shame the Bahati drama is indeed taking (money and attention) away from Rahsaan’s cause as well. The sponsor’s can (and do) vote with their dollars whether they think Landis will bring them negative or positive attention.

Chad puts on great events in both the Cascade and Mt Hood Classics, there’s a tremendous amount of (volunteer) work to make it happen, and the community benefits (and has fun). A few bad apples don’t spoil the whole bunch, but if you want drama feel free to let this kind of crap bother you (and/or tune into WWF).

Me, I prefer to watch some RACING!

Forgive Thad. He’s a bandwagon cycling “fan” who watches for three weeks on Vs. (Guess which race?) and pronounces himself an expert.

Besides the possibility of not being doped, the riders that you mention are also on the bad side of age 35 and at the tail end of their careers whilst a new generation of riders is ascending the sport. For an old guy, Levi’s riding pretty well sitting 7th on GC despite starting the race as a domestique. Limiting his losses today and a good TT effort will likely put him in the top five in Paris. Horner could find himself in the top ten with a strong ride today and a good TT on Saturday.

But keep hating and jumping to the worst possible conclusion. That is the fashionable approach for Lance hating interlopers.

TransLance! Your just like Lance, ignore the message, kill the messenger. Maybe Lance can use your amature cycling fan angle on the federal investigators? Watching on Versus (Lance Channel) funny stuff! You keep watchin and you will keep seeing roads I’ve ridden in France! I’m sure you believed in WMD’s, bought in that Housing only goes Up & backed BP every step of the way in the gulf disaster! Yep you keep believing that Lance is the only racer of his genertion to be pure as snow! Get rid of doping for good this time, get to the bottom!

Lance is afflicted by Greed! Could have stayed retired, but you can’t ever fill up the cup of Greed! All the tragedies above are also Greed based! Floyd could have taken less and waited his turn, he clearly was greedy, taking in twice the paycheck, but he ignored the ruiness risk of getting caught for doping! Those that left the Johan Juice train fell hard but Floyd’s greed told him to ignore that! Now he lay in a heap like Heras, Chechu and Hamilton! TransLance the key was as soon as Floyd got black balled by the TOC, those who are smart enough could see that something was going to give, now instead of helping Floyd with a few pennies, Lance’s entire brand is on the presipus of falling into the darkness!