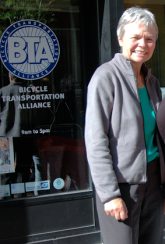 Trudeau joined the BTA in April 2009 and is the second of three directors to resign from the organization this year. Former Operations Director Angela Koch left the organization in March after being first hired to lead their Safe Routes to Schools program in May 2007.

Sadowsky says the tumultuous recent history of the BTA has taken a toll on staffers:

“Everyone who has weathered the last seven months has had a difficult time… It’s been a lot of extra work and introspection for the organization… All our directors have been asked to take on a lot of responsibilities.”

Reached at the airport before hopping on a flight to Portland to attend Friday’s Oregon Bike Summit and the Alice Awards benefit on Saturday, Sadowsky spoke of the BTA “moving into a new era.” “There’s some excitement building… We’re trying to re-invigorate ourselves. She just came to the conclusion that she didn’t have the energy to jump on board with us.”

Sadowsky added that he was looking forward to working with Trudeau and that both he and the Board asked her to stay.

The “difficult time” in the last seven months he referred to is due in large part to operating without an executive director. The BTA fired former leader Scott Bricker in November and Sadowsky doesn’t officially take command until July 1. While he isn’t working full-time yet, Sadowsky has been highly involved and is already transitioning into his position.

Helping with that transition is former Community Cycling Center executive director Susan Remmers, whom the BTA has hired as an interim director on a part-time basis. Remmers is helping to focus staff, offer feedback to the board, and she’s also working closely with Sadowsky to make sure he hits the ground running.

Trudeau will also stick around to help Sadowsky make a smooth transition.

Best wishes to Eileen! I met her only a few times, and she seemed like such a lovely person — certainly, a credit to the BTA.

And the bloddletting continues at the BTA.

Might it be better for the New Executive director to start NOW? Why the wait?

The new BTA isn’t the BTA from a few years ago. Does anyone know if the BTA is growing up or just falling apart? It feels like even us long time members have little idea of whats really going on.

i really do not think we know enough about the situation to say this is part of a “bloodletting.” presumably rob has stuff to finish up in chicago.

Blockfoot (#3) – The BTA is reinventing itself, I’d say, and without praising nor condemning the past, I think the changes taking place right now are very promising. Sadowsky’s record speaks for itself, and while I don’t know how much Susan Remmers is doing there at the moment in her part-time capacity, she understands nonprofits and is exceptionally good at managing them and aligning people with the organization’s mission. The BTA at the top is practically a new organization, but many of the staff, especially those in the Safe Routes to Schools program are still there and working as tirelessly as they did before. The “rank and file” of the BTA are an exceptional bunch who put in a lot of hard work.

The troubles of the last year or so appear in large part to be due to differences in strategy and focus between the board and the senior staff. I don’t ascribe any blame here, these type of differences happen frequently in nonprofits, and eventually the organization works them out and continues with or refines its mission – or folds. I think the BTA has forged on through some dificult challenges and they’re working to retain a leadership role in bike advocacy while addressing the concerns of their membership – that’s not an easy task in the best of times, much less during a recession.

I think the organization has a really great opportunity over the next 12 months, and I’m looking forward to seeing what Rob Sadowsky and the BTA’s board do with it.

BTW, This weekend is the Alice Awards, and if you have $100 for a ticket, GO. Have fun, watch the awards, buy something in the auction, support the BTA.