[Publisher’s note: In a story last week I hoped out loud that City of Portland Bureau of Transportation (PBOT) would seize the opportunity to re-stripe Williams Avenue north of Broadway with a wider bike lane. The road is currently torn up for a repave, so what better time to try and eke out an extra foot or two for bikes? PBOT got in touch with me after reading that story and requested to write a guest article about the situation. I agreed and I’ve published the piece in its entirety below. I’ve put some of the most important bits in bold.] 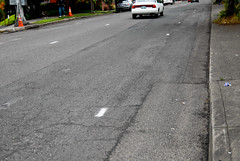 Williams is currently torn up.
When it gets re-striped, the bike lane
will likely be one foot wider.
(Photo © J. Maus)

The Portland Bureau of Transportation is currently reviewing proposals for the North Williams Bikeway project, which will include a consultant contract to redesign the street with better bicycling in mind. We’ll also likely paint temporary lane stripes that give cyclists one more foot of space in the N Williams bike lane as a short-term fix for some problems identified by the bikeway project and general public. The temporary lane lines will be laid down in paint rather than thermoplastic so that they can be easily changed when the North Williams Bikeway project has determined the best long-term use of this important street.

“We’ll also likely paint temporary lane stripes that give cyclists one more foot of space in the N Williams bike lane as a short-term fix for some problems identified by the bikeway project and general public.”

The bikeway project stretches from North Weidler to North Killingsworth and aims to improve the comfort and safety of an existing bikeway, as directed by the recently adopted Portland Bicycle Plan for 2030. The project development phase that’s just beginning will make use of a consultant team (under selection right now) to help the Bureau of Transportation engage stakeholders and examine a range of ideas about how to improve the bicycling experience on this heavily used bikeway. Once the bureau chooses a consultant team, we will schedule public workshops this summer to gather as much public input as possible before making any long-term decisions. 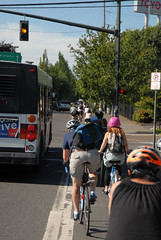 Bike traffic queues up on
Williams at Broadway.

In the meantime, the pavement on North Williams has been ground down between North Broadway and North Stanton in preparation for repaving. Each year, the Bureau of Transportation coordinates all paving and street improvement projects to ensure that our time spent working in the right of way is as efficient as possible. In what is looking to be the busiest transportation construction season in decades, there was an oversight by the Bureau of Transportation and this specific paving work began early. The North Williams paving project was planned to start after August 2010 due to Portland Streetcar Loop construction in the area. We are working to make sure oversights like this don’t happen again.

The current bikeway project is one of many that has affected the North Vancouver/Williams corridor in inner North Portland. Historically, this area includes one of Portland’s oldest commercial districts and was a main street for Portland’s African-American community. With its distinguished history, emerging bicycle-oriented business community and more than 2,500 bicycle riders every day, the North Williams Bikeway project area has many stakeholders who should be involved in discussions about the future cross-section of the street.

One example of recent collaboration between the North Williams riders and the bureau happened last month. On May 7, the bureau’s Signals and Street Lighting group modified the traffic signal timing for North Williams at North Broadway, giving more green time to North Williams to better match with bicyclists’ speeds.

For more information about the North Williams Bikeway project, contact Ellen Vanderslice at (503) 823-4638 or ellen.vanderslice@portlandoregon.gov. Thank you. — PBOT Staff

We’ll be watching this project closely so stay tuned for a confirmation about the extra foot of width and about the process to determine a more long-term solution.

hey, thanks, Ellen! You made that look easy…

Here’s my idea for the corridor in general, but there might have to be some exceptions in specific locations.

So there’s the obvious problem of buses leapfrogging with cyclists. Solve that by putting the bikeway on the left side of the street. It’s one-way its entire length, so this shouldn’t be an issue. The only issue would be crossing one lane of traffic from the Wheeler Ave bike lane. Why let this happen in the first place? Wheeler Ave is 3.5 lanes wide, and the Rose Quarter bikeway is in the center of traffic, so why not take one lane from Wheeler along with the bike lane and make a separated median bikeway starting at the Rose Quarter? This would split when the road splits into Vancouver and Williams, and the bikeway would already be on the left side of Williams.

On Williams itself, we could then have a lefthand cycle track the entire length by removing one lane of either parking or traffic. This would continue to a block or so before Killingsworth, where left-turning cars would somehow have to be accommodated, either by a weave with the bikeway, or else a separate signal phase.

In summary:
Separated, two-way median bikeway along Wheeler from the Rose Quarter to Williams
Left-hand cycle track on Williams to Killingsworth.
Most likely signals for left-turning traffic.

Jonathan, 2 weeks ago you published a story about the Burnside Bridge ramp from Couch being dangerous for bikes and the next day the problem gets addressed and improved. Now this Williams story. Way to go man! Change I can believe in.

Maybe Jonathan is the masked cyclists? By day a mild manner reporter, by night a caped crusader?

re comment 2, what about traffic turning left from williams down onto the highway entry ramp?

Great news! I could do without the 10″ drop into williams off of Broadway that showed up after the pavement was ground down, though, or the same crossing williams at Tillamook. Do I understand this correctly to mean those will be around until August? Yikes.

Ellen, thanks for speaking directly to the public in a form that allows public response.

1) When will most of the new pavement be laid down? As someone asked above.

2) The history of this hood is full of the community being wiped out by government projects. A stadium and Interstate 5. ( aka roads before people )

3) Please don’t make things worse by leaving this unpaved for more than a few days. Unpaved road will cause bodily harm to cyclists and economic harm to the small businesses. Note the gentrified Albina/Mississippi was stripped and repaved a few days later.

Perhaps this whole entire blog is a complex guerrilla marketing campaign by the city of Portland to secretly engage cyclists. 😉

I commute on that street everyday.

Thank you PDOT! And yeah, finish it fast! I hate biking on the crazy gravel rocks. Not safe at all.

Thanks for the changes, PBOT. I also hope that this gets completed quickly.

But I am MOST INTERESTED in what the long term changes will be in a year. This is a really wonderful opportunity to make the Van/ Wil couplet the best cycling highway in Portland.

I love the Vancouver/Williams bike couplet. I live at the north end of it and can ride downtown faster than driving at rush hour. As it gets more popular more of my neighbors are biking more. More bikes, less cars, better neighborhoods.

Thank you Ellen for all your hard work. It is really paying off. Now, can you do something about all the traffic on I5 pumping pollution into my neighborhood’s air? Maybe you can close the Columbia River bridge to all but light rail and commercial trucks, and forget about the CRC.
Just a thought.

I am confused…when I bike this route there are dotted lines where the bike lane is supposed to be, but the lane seems to be one foot NARROWER THAN PREVIOUSLY. I have talked with other cyclists who ride this route regularly and they concur. This to me is alarming and I wonder why more cyclists are not up in arms about this. If PBOT says they will be wider, I guess I’ll have to take their word on it. Currently, they are narrower so I guess I’ll just wait and see…

@Morgan Scott: I think [hope] that that is just for the week or two while they are repaving it, not the long term plan, since they obviously going to put a layer of asphalt over the top of the current mess.

Note that the lines are isn’t even close to straight now, the left car lane is far too wide and the right one is too narrow. As such, I suspect someone just drew some lines down the road to make it clear there were 3 lanes, (not one really wide one,) but those lines are obviously very very temporary. Of course, with the current parking restrictions there, there is about 10 feet of usable bicycle space, (too bad it is full of gravel.)

This is wonderful news.