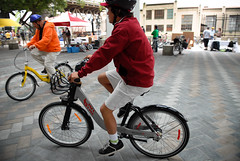 With their recent launch of 500 bikes and 50 kiosks, Denver is now home to the largest bike-sharing system in the United States. Bike-sharing has yet to catch fire in the U.S. like it has in Europe, so Denver’s foray will be watched closely by other U.S. cities, like Portland, that have shown interest in the concept.

It’s been over three years since Mayor Sam Adams (who was a commissioner back then) first launched an effort to bring a similar system to Portland. Since then, Portland officials have done quite a bit of thinking and planning: They’ve visited other countries to research bike-sharing systems; they’ve come close to choosing a vendor (then canceled their search altogether); they invited some of the top bike-sharing companies in North America (including B-cycle) to a demonstration event; and they launched a survey to gauge public interest.

“MP3 players had been around for years in obscurity before Apple made it a must-have addition to the lives of millions. Maybe Denver will be America’s iPod of bike share programs.”
— Tom Miller, Chief of Staff for Mayor Sam Adams

With the big news in Denver, I wondered if Portland was perhaps thinking of putting the idea back on the front-burner. Denver’s partnership with B-cycle is the largest and most legitimate bike-sharing roll-out in the United States. The success or fail of the system there could have major ramifications on bike-sharing plans in other cities.

Or, as one source close to the Denver’s plans told me recently, “Everyone interested in bike sharing and urban cycling has to be watching Denver. If bike sharing falters there, that will not bode well for other places.”

Mayor Sam Adams’ Chief of Staff Tom Miller (who wrote a six-part series on bike-sharing for us back in 2008) says they’re unswayed by Denver’s move. When I asked him for an update earlier this week, he said, “Portland doesn’t create policy or programs to ‘keep up with the neighbors.'” 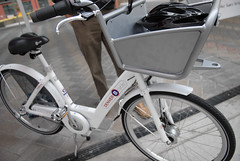 B-cycle bikes are made by Trek.

Miller says the Mayor’s office sees bike share in a “broader context” of how best to provide choices to Portlanders beyond our “near-monopolistic reliance on the private automobile for everyday travel needs.”

Miller points out that a key difference between Portland and Paris — a place where bike-sharing took off like wildfire — is population density. The more densely people live, Miller explained, the shorter the average trip length and “the more viable a bicycle becomes.”

But density isn’t the only factor according to Miller’s analysis. For a program to be successful, Miller maintains that the provider/vendor must know the local culture and lay of the land (geographically):

“You also have to know whether a three-speed bike is enough to get your middle-aged neighbor up Interstate or Mississippi to North Portland from the central city. Alternatively, does a bike become too expensive to maintain if it must have seven speeds or more to account for local topography?”

Miller barely touched on cost, but it’s the one factor perhaps looming largest in his office’s mind. With the failure of Portland’s attempt at free public Wi-Fi still fresh in City Hall’s memory, Mayor Adams wants a system that uses no public money. Portland also has a city ordinance that puts limits on advertising in the public right-of-way. Those constraints make it very difficult (impossible?) to find a vendor that can make a bike-sharing system in Portland financially feasible.

Ad giant JC Decaux saturated Paris with kiosks and public bikes because of the huge advertising presence it gave them. The company didn’t even respond to Portland’s call for vendors. 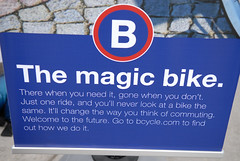 The magic bike? Portland wants more
than smoke and mirrors.

In Denver, this big roll-out is only possible because the political and funding stars have aligned. Start-up costs were offset with $1 million from the 2008 Democratic National Convention Host Committee surplus fund and the project was an easy sell because of the success of the Freewheelin’ bike share program during the conventions. Add in the 100% support from Denver’s Mayor and a smattering of grants and private funding commitments, and you’ve got a perfect political and financial storm.

According to a source, Denver’s B-cycle system is now run by a 501c3 organization that has raised a total of $2.2 million. Costs for a bike-sharing system from a top-notch vendor is around $3,500 to $5,000 per bike. One expert I spoke with said a 500 bike system would require “at least” $2.5 million in start-up costs.

Given the political and public heat Mayor Adams has come under for the 2030 Bike Plan and for his recent $20 million BES/PBOT/green streets idea, it’s easy to see why he’s not pushing forward on bike-share. If they make a move, it would come with significant financial and political risk.

But whether it’s politics, population density, or price, Miller says it comes down to finding the right business model and they haven’t completely given up on the idea:

“While Portland has decided to observe rather than engage, we’re not abandoning hope either. MP3 players had been around for years in obscurity before Apple made it a must-have addition to the lives of millions. Maybe Denver will be America’s iPod of bike share programs. We hope so because Portland will be an early adopter.”

Minneapolis will be installing a bigger system then Denver soon! NiceRide will have 1000 bikes and 80 kiosks throughout the city!

Portlands mayor is quite unpredictable. He often goes ahead with things that most sane people would scoff at. The city is running on less money than it has,things are not getting done, staff is being cut, an acceptable notion with many these days. Sewer rates are allready promised to double, why not triple?

B-cycle bikes are made by Trek, because B-Cycle is a subsidiary of Trek.

I will be in Denver in July and I have already scouted out where I can pick up a bike near my hotel!

In my opinion, a bike sharing system confined to Portland’s densest neighborhoods would be a huge success. I’m sure this phenomenon varies by route, but during commuting hours, bike racks on buses and the MAX fill up quickly. I’d bet that many Portland commuters would happily leave their cars at home if they knew they could take the MAX to work and ride a bike downtown for the same price they pay for parking. Yeah, you can do this now for free if you bring your own, but who here hasn’t known the dismay of being the third person to show up with a bike at the bus stop or the jerk with the bike in everybody’s way in a full MAX car?

A downtown PDX bike share system would be a huge draw for people (and the developers and businesses that follow them) looking for dense, urban living, as well as a nice carrot for those who choose to stay in the suburbs and take public transport to work.

There are plenty of ways you could make money for this kind of a thing without using advertising. You could, for example, partner with developers and apartment complex owners. Make the price of an apartment include the cost of an unlimited bikeshare membership. It makes as much sense as those pearl district developers who give away beach cruiser bikes. It would be an attractive perk for many looking to move downtown, as well as a guaranteed stream of revenue for the bike share company if they worked their contract out right. Or why not hotels? The ace and many others already loan bikes to their guests, but for most downtown hotels it makes more sense to simply include a daily bikeshare pass in their fees. Guests have access to a much larger fleet and the hotel doesn’t have to worry about maintaining bikes.

Furthermore, in a place like Portland, I’m sure many business owners would fight to have a bike share kiosk set up on their curb; its like having customers delivered to your door. Ask them to help pay for start up costs. The return is a swarm of potential customers coming and going from your doorstep all day long.

It’s true that many areas of Portland aren’t dense enough for a system like this to work. Well, okay, don’t put a system like this in those areas. In ten years when suburban life becomes increasingly expensive and unattractive and Portland’s inner neighborhoods start to fill out, then you can expand the system.

Why refuse to name sources ?
Isn’t it industry-standard to explain why you are not doing so ?
Anyway, I like bikes, but I’m not a big fan of this program. Residents can ride their own. Tourists can rent a bike.

Just got back from Paris and used the Velibe bikes. It is a good system to augment bus, walking and rail. It may take a while for everyone to get used to the system so we should allow at least two years to see how widely it is used.

the person that told me the information does not want to be named. simple as that.

You can see the entire non-profit business plan for MPLS’s NiceRide on their website if you’re curious as to how the numbers could work out for a large bike sharing system.

It’s thought that bike sharing will be successful in our city due to size and topography, plus we have a large number of people (150,000 )who work downtown and might enjoy riding a bike for short trips or a break during the day. NiceRide is free for the first 30 minutes if you buy a $60/year membership.

I’m trying to imagine situations when I – a daily bike commuter – might use such a service. The thought of parking someone else’s bike outside in the rain would be attractive were I to want to go from the Lloyd District to downtown in the middle of the day. Of course, I can do that by train for free and almost never do.

In my fantasy world there would be a huge number of kiosks – never have to carry a lock because there would always be a kiosk to return the loaner to, and rarely have to pay because if I could check out another bike for the trip back, I’d probably never have one out for more than half an hour. And let someone else do all the maintenance and repair? Nirvana.