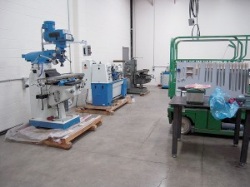 The United Bicycle Institute will start its first framebuilding class on Monday (4/12) and the classes will be taught by two of Portland’s most prominent frame builders — Tony Pereira and Joseph Ahearne.

Ashland-based UBI has been offering professional mechanic training courses since they opened their campus in North Portland back in October. Since then, they’ve been working to renovate one of their buildings (on the corner of North Williams and Shaver) to house their frame building classroom. Those renovations are now complete and brazing classes start Monday.

UBI announced yesterday that Portland-based builders Tony Pereira and Joseph Ahearne will assist with this Monday’s brazing class. By summer, once they’ve learned UBI’s curriculum, they’ll teach their own classes. Pereira and Ahearne are both veterans of the craft who have won national acclaim for their work.

“Both builders set new standards for creativity and quality with their brazed bikes, and we’re excited to incorporate their input and talent into our frame building curriculum.”

Daaaaayam. I could use this course. Got stream?

Is it always going to be Tony Pereira and Joe Ahearne? Being that they are the kings of fillet-brazing I would love to learn from them.

Pretty sweet news. It would be pretty incredible to take a class from any of those framebuilders. UBI is really putting together something awesome!

I took the pro mechanic class last fall right after UBI opened the PDX campus, but didn’t think i had a big desire for the framebuilding class. Seeing who the instructors are changed that. May never build anything but my own frame, but that would still be worth it.

You know I really wished they offered some sort of night class, as I would love love love to take some frame building classes but there is no way I can take two weeks off of work.

Two, three…five years for the delivery of a hand-made bicycle frame and the builder takes second job?

Hey Jim ever consider that their goal may be to train potential apprentices?

bet the time it takes to teach this class puts zero dent in the wait time for a frame, and might be more because, oh, they love what they do. geezus jim, really?

Two, three..five years to deliver a product to a customer? Good God! That’s what we need more “artists” bringing $2000 frames to the masses. Please! It just a bike.

If it’s just a bike why are you so bent out of shape for the wait list ?

Because…I’m really not bent out of shape. Just stirring the pot…because the bike community stirs so easily. This site’s been getting a little touchy-feely lately. That’s all.

Sorry if I upset you. Take a deep breath, now.