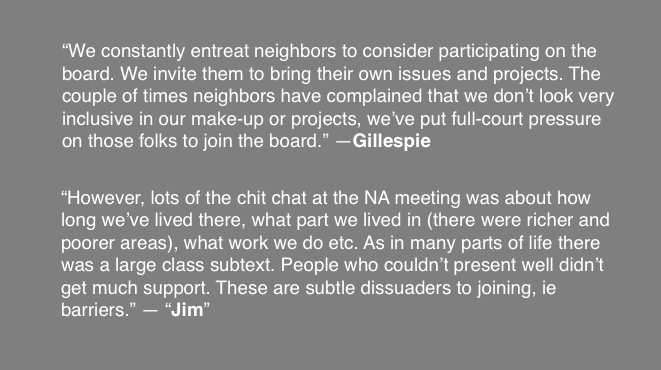 Note: We’ve decided to to recommit to our Comment of the Week feature, where we highlight quality comments to illuminate an important point and/or inspire good comment practices. You can help us select comments by replying with “comment of the week” to any comment you think deserves attention.

BikePortland’s two articles this week about a PBOT plan for a new a new diverter at NE Fremont Street and NE Alameda Street continue to spark strongly held opinions about neighborhood associations.

The president of the Beaumont-Wilshire Neighborhood Association (BWNA), Tim Gillespie, took the time to write a thoughtful comment about their Alameda diverter vote, as well as about neighborhood associations in general. His comment is our first “Comment of the Week.”

I have also included a comment from “Jim.” Of all the comments critical of NAs, Jim’s stood out because it was based on his concrete experience, and he really seemed to be consciously trying for a respectful dialogue. (I’ve very lightly edited Jim’s comment because it was in reply to someone else.)

Both comments are long, but if the issue is as important to people as the number of comments suggests, I think it is fair to give both commenters a careful read.

Thanks for covering this issue and thanks for joining the meeting last night. As one of the 4 (out of 11) Beaumont-Wilshire Neighborhood Association Board members who voted in favor of the PBOT pilot, I’m disappointed that we won’t begin this evidence-gathering trial right away. We had over 70 people at the Zoom meeting (7 times more than our average attendance online) and have been running an email forum (that generated over 50 different people’s comments about the project), and the percentage of folks who expressed support and opposition to PBOT’s pilot in the forum was about the same as the board vote percentages. As you saw, there was lots of speculation about traffic being unsafely diverted to smaller neighborhood streets and concerns that this one mitigation doesn’t solve all the problems along that stretch of Fremont, but unfortunately not enough talk (in my opinion) about the more important long-range goals of creating a more bike- and pedestrian-centric city. I wish I would have been a more eloquent proponent for the proposal.

However, you should know that our Transportation Committee members (including two board members who voted yes and two who voted no on the proposal) are back to the drawing board already, letting PBOT know about the vote and working to help create a proposal that addresses some of the limitations of this first draft of the project. In other words, this isn’t over.

In light of others’ comments, I would also like to add a few words in defense of Neighborhood Associations. This is my second stint on the BWNA Board. I ultimately couldn’t sustain my involvement after a couple of years in the early 1980s because I had young kids and a demanding job as a public school teacher. Now I’m retired and have more time to devote–like the nearly 40 hours I spent in the last week on this issue. But that reveals the problem with NA diversity or lack thereof. I grant that I’m not representative –I’m white, old, and a homeowner. (Been in the same 1925 1500-square foot house for 42 years.) But my age and retirement and pension do give me more time and freedom to volunteer, a luxury many can’t afford. Even recognizing that, I’ve got to say that we at this NA have worked very hard to try to encourage neighbors here to join and to participate. We have a couple dozen volunteers who hand-deliver our bi-monthly newsletter to every doorstep of all 2600 residences in Beaumont-Wilshire, whether owner occupied or rentals (though it’s been hard to gain access to the apartment/condo high-rise, unfortunately), and we work to have a welcoming website and expanding email list. We have a New Neighbor Welcoming Project that makes contact with anyone who moves in with info about BWNA, free coupons from local businesses, and invitations to join us. We constantly entreat neighbors to consider participating on the board. We invite them to bring their own issues and projects. The couple of times neighbors have complained that we don’t look very inclusive in our make-up or projects, we’ve put full-court pressure on those folks to join the board. I’ll send out a message to all the forum participants on this traffic issue, telling them about our upcoming election. So to poach some language from another respondent on this thread, though we can’t claim to be a fully representative body, as a participative body that relies on volunteers, we’re sure trying to draw in people.

And I also feel compelled to say that we do a heck of a lot more than just put our nose into issues like PBOT proposals. We do see an important part of our function as being a conduit between neighbors and public agencies, but the scope of our work to improve our neighborhood’s livability is far wider. We’ve raised funds and used volunteers to add natural plantings and an updated kids’ area to Wilshire Park. We’ve written grants to support the Beaumont Middle School Family Resiliency Fund, offering grocery store gift cards and rental assistance to struggling families through the PTA and school counselors, and to support the Community Cycling Center’s program of distributing food and care kits by bike to families, mostly from the Latinex community in the Cully neighborhood next door to us. After an incident of racial harassment of an Asian American neighbor, we intervened on behalf of that victim and then collected and disseminated information on what to do and resources for those suffering or witnessing an incident of racial bias or harassment. We’ve published resources to share with people experiencing homelessness as well as resources for dealing with illegal RV camping. We’ve faced climate change issues by forming a link with Portland Clean Air and opposing the expansion of the Linnton oil terminal. We’ve tried to activate interest in Portland’s Neighborhood Emergency Team program, thinking about helping neighbors in the event of earthquake or heatwave or any other such disaster. We’ve mediated a dispute between neighbors and a local business. We sponsored a Red Cross blood drive during the pandemic-cause shortage. We have a Volunteer Group ready to pitch in for any neighbor who might need a helping hand with yardwork, window washing, or other such projects.

Anyway, I’m beginning to sound a little defensive here, perhaps, and I’ve gone on longer than I’d planned. But I do want folks skeptical of NAs to know that for all of their admitted limitations, they can be a venue for neighbors working together to make this a better city. You can help us be more inclusive by joining up.

[…] Yes, home owners may plan to be in their neighborhood for a while. They are lucky to usually have that option, as I do now in my home. Many non homeowners would love the security to put down roots in their neighborhood, but don’t feel they can, due to uncertainty and financial insecurity. I’d love to still live and have roots in the inner SE neighborhoods I lived in decades ago. NA membership skews richer, we can debate why til the cows come home. It’s not nefarious, it’s just normal reality.

In my last neighborhood I tried to work on road projects with the NA. I started by seeking ideas and support of my neighbors. I have no interest some “activist class” that is separate from the “regular people”. That’s a false distinction. It was hard for me to attend NA meetings, I had to get out of work early every single time to attend. Another barrier that you seem blind to. People there were great. The NA liked my suggestion, but PBOT couldn’t find the time or money. However, lots of the chit chat at the NA meeting was about how long we’ve lived there, what part we lived in (there were richer and poorer areas), what work we do etc. As in many parts of life there was a large class subtext. People who couldn’t present well didn’t get much support. These are subtle disuaders to joining, ie barriers.

Of course safety is about trade-offs, to be “fully safe” we’d never get out of bed, etc etc. Is there politics in stating that many NAs and many Portlanders will not trade an extra 5 mins of their car commute in exchange for lessening the (quite small) chance of people dying on the streets? That seems pretty bland and obvious. I don’t intend to be political in it.

Note: We have disabled comments on this article because comment authors were not notified prior to publication of this story.