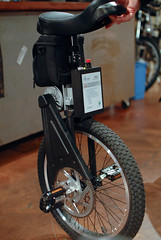 The eBike Store in North Portland has become the first dealer in the country to stock the Self-Balancing Unicycle — a.k.a. SBU. The SBU is an electric-assisted unicycle with “advanced angle sensing electronics and software” that allows it to balance and “pedal” for you.

The SBU was invented by engineer Daniel Wood of Camas, Washington-based Focus Designs. I met Wood last week for an up-close look at his amazing invention.

Wood, 31, was laid off a year ago from his job at U.S. Digital in Vancouver and has spent the last two years developing the SBU. A classic tinkerer, Wood had previously invented a remote-controlled Segway-like device he called, “Gimpy.”

“I wanted to take the guts out of Gimpy and put it on a unicycle to see if it would work. I was the guy out in the parking lot on my lunch hour on a unicycle with 40 pounds of lead-acid batteries in my backpack… I was fumbling around, then all of the sudden I was riding. It was awesome!”

The SBU has come a long way since then and Wood is now looking for investors and dealers. He says it’s a simple, lightweight, and compact way to get around. The ideal users, according to Wood, are public transit riders, college students, carfree urbanites, truck drivers, tourists, and so on.

Unlike a standard unicycle, the SBU is easy to get the hang of. I’ve never been able to ride a unicycle, but in a few minutes, I was whizzing around on the SBU, feeling all futuristic and cool. It’s a strange sensation — you just sit on the seat, lean forward, and the SBU zips you around. Want to stop? Just roll your hips back and it stops. You don’t even pedal (there are no crank arms), you just sit and glide.

Wood took the SBU to the Interbike trade show in Las Vegas last year and said it was a huge hit. He’s also gained his share of notoriety thanks to an appearance on the Mythbusters TV show back in December. He’s sold about 26 of them so far. The current price is $1,499. Here are a few other specs and features:

As our transit network expands, SBUs might appeal to the many people who will live a long walk from their transit stop. Will these things be the hot ticket in Portland? What do you think?

You can try one out at The eBike Store at 201 N. Alberta Street (on N. Vancouver Ave.). Check out the video clip below from Mythbusters to see it in action:

I vaguely remember a couple stories dating back a year or so ago about similar machines. The person reviewing one of them said it was a little challenging to get the hang of riding it. The other was a Japanese designed, slick, modernistic, white monotone rig. Really expensive too.

This one looks so simple and functional. Could use fold up pedals. The price is good. The speed is good. I would think these things have great sales potential.

as someone who hopes to someday retire to a sailboat (a guy can dream, right?), i love this!! a couple things come to mind:

1) can/does it charge just by plugging in?

2) i imagine some ways to carry cargo… like maybe way, way low-slung little fold-up trailer? front and rear pouches? who knows. at minimum, a coffee-holder. haha

3) wiggle/rock your feet to charge it? (hey, i am trying to make it so i can get *some* exercise!)

anyway, its pretty cool. would love to try one someday.

1) Yes, it comes with a charger and can easily plug into a regular outlet (110v or 220V when favorable winds take you to the South Pacific)

2) Coffee Holder is plausible. I would wait until you are good at it to try carrying too much cargo – it tweaks your balance. I had a heck of time commuting home with my chrome bag full of books / computer. (I might be sending this from a recently cracked laptop…)

3) Wiggle charging is not available at this time. However, you will get a core workout as you get your balance muscles up and working!

When the battery runs out while day-trippin’, can ya pedal to an outlet, or doya havta lug it?

The pedals are for balance, not propulsion. However, when the bus or max is already full of bikes, you can hop on with the SBU (it weighs 24lbs).

A hilarious answer to an unasked question. I can’t wait to ride one.

Way cooler than a Segway. But I’ll be really sold when I can add some pedaling muscle. I want to provide (most of) the energy and it to help me balance and maybe serve as an infinitely-variable-transmission.

Tried this thing at MCBF and it is wild. Definitely takes some getting used to!

Yeah! I saw this thing the other day at Wake’s store. Really cool machine. Go Wake!!

“Electric assist” is likely an inaccurate label for a thing you don’t pedal. That said, it’s still one of the most fascinating new technologies I’ve seen to come down the electric vehicle pike.

It’s cool engineering exercise but it doesn’t seem to serve any real transportation purpose my Brompton couldn’t do 10x better at the same price point.

My Bromy can do 30mph, has a place to put lights for and aft, full fenders, helps me loose weight, gets gawking stairs (even from the ladies) and never needs charging.

Andy #14, your Brompton seems like a cool engineering exercise, but doesn’t seem to serve any real purpose. I have a 1976 BMW R90/6 motorcycle. It goes 100mph, can go on the highways, gets stares from people and never needs charging. Plus it can carry a heck of a lot of cargo and will probably run for another 35 years.

Progress is so cool as I type this on my iPhone
we barely have to think, walk, talk, etc
cool video
better than driving a car unnecessarily
probably a fad or ?? Gimmick
certainly not electric-assist
more like a wheelchair

i’m just gonna wait for the youtube crash videos to start piling up.
that’ll be the one thing i look forward to.

i’m taking the brake off as soon as i get it.

can you get aerospokes for it?

sort of like the yike bike but less wheels and less $

Hard to believe the 10 mile charge in the FAQ. But still! To jet around downtown without looking like a douche on a segway.

I love my bikes, but sometimes you just want to get from point A to point B without breaking a sweat. Especially in work clothes.

Good luck guys…it is always a trip to see you all riding around Vancouver on it for the last 2 years.

That said this thing sounds like a hoot. If you could pedal it, I’d seriously consider getting one – please make a variant that you can pedal!

Oh, and I should add that I’m aware that making it actually pedal assisted would complicate both the drive train and the control system. But I still want that version 🙂

From the video it looks like he’s invented a 1-wheeled chick magnet… way to think around the box (bike?) and good luck with your business!

Flip-up pedals are a good idea, and maybe options for removable batteries with different weights/durations.