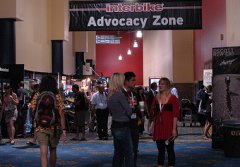 The Advocacy Zone, a welcome sight
for this Interbike newbie.
(Photos © Elly Blue)

It’s my second day at Interbike (see Day 1 report here) and the main event is open — a giant exhibition hall packed with many hundreds of booths and the many thousands of bike industry insiders who have come to gawk, shop, and mingle.

But before I got into the main floor, I stopped into The Advocacy Zone. About two dozen organizations have set up shop here and they range from national advocacy groups like the League of American Bicyclists to a California based org that takes disadvantaged kids on mountain bike tours. 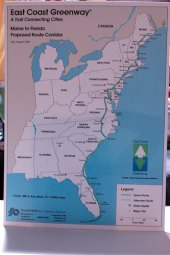 An exciting project for sure.

The first booth that really caught my eye was the East Coast Greenway Alliance. Coordinator Eric Weis told me the group’s mission is to create “the Appalachian Trail of bicycle routes.”

The 18 year-old Alliance works with state committees along the east coast to create what they eventually hope will be a 100% fully-separated bicycle route from the Canadian border to Key West. Currently they’re 23% of the way to their goal, including pieces in every east coast state, with the longest section being a 37 mile chunk in New Jersey. (I happened on the ribbon cutting for another piece of the network when I was in Connecticut last winter.) The other 77% is routed along carefully chosen local streets.

Next I chatted with Peter Rees of Project Rwanda, an organization that builds longtail cargo bikes specially geared and designed for carrying up to 400lbs of coffee beans or other cargo up and down Rwanda’s mountain roads. Through a partnership with Schwinn and Ritchey, and loan programs with local banks in Rwanda, the bikes are sold to farmers and farm co-ops for the equivalent of $300 US dollars.

One of the best features on the wood-decked, longtail bikes is that the brakes and derailleurs are placed so that they can be maintained while the bike is fully loaded (an innovation I wouldn’t mind seeing hit the commuter bike market). The goal, said Rees, is to eventually manufacture the bikes in Africa. 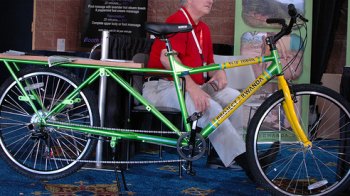 The Project Rwanda longtail. (Notice how the rear brake is not right under the deck, making it much more accessible for maintenance.)

Before leaving the Advocacy Zone and hitting the main show floor (update from there coming later), I spoke with Tim Blumenthal, one of the biking world’s top diplomats and executive director of Bikes Belong (who ingeniously contorted his spine so that we could talk eye-to-eye despite a height difference of over a foot). The powerhouse organization’s 10th anniversary is coming up; in the past 10 years, they estimate that $10 billion has been spent on bike infrastructure in the US.

What about the next ten years? They don’t have a specific numbers forecast, but they’re setting their sights high. Next March at the National Bike Summit, Blumenthal says, they’ll be launching a major campaign to reach out to the 50 million US Americans who sometimes ride bikes (Jonathan covered it back in April).

Their aim is to have 1 million people express support for bicycling as a national priority. To get the word out, and to keep supporters engaged, they’ll be working with ad agency Colle McVoy and Blue State Digital (the folks who used online media and social networking to help Obama win). The point: “To increase political clout” for bicycle advocacy.

Blumenthal also had some interesting insights into the state of the bike industry when it comes to advocacy — more on that once I’ve hit the floor and started talking with a few of the players.

And don’t worry, there will be photos of amazing garage inventions and spun carbon fiber wonders as well. Stay tuned.

In case anyone is interested in finding out more: the group that leads mountain biking rides for at-risk youths (teaches skills for riding in general and has an earn-a-bike program) is Trips For Kids, http://www.tripsforkids.org/
They have many chapters in cities around the US and Canada.

It’s great to see advocacy representation and journalism at major bike events, which the mainstream “bike press” has neglected for so long.

We’re big supporters of the East Coast Greenway. One of the best opportunities for intercity trails is to build them along active railway lines. Sign our rails-with-trails petition, to require bike-ped accommodation in all government-funded rail corridor improvement projects.