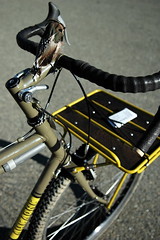 What sort of features will
builders like Joseph Ahearne dream up?
(Photo © J. Maus)

If you haven’t taken time to peruse the schedule of the Oregon Manifest, you should. The six-week event — which last year mainly focused on a custom bike show — has blossomed into nothing short of an urban biking summit.

This year organizers have added everything from workshops about family biking to a full-fledged bike fashion show (to coincide with Portland’s Fashion Week).

However, despite it’s broadened focus in 2009, the Manifest maintains its roots as a showcase for America’s finest, handcrafted bicycles. This year, instead of the typical bike show format, organizers have challenged the nation’s top builders to create (and then ride) the ultimate transportation bike. And the builders have responded.

As of today, 30 builders from all over America have confirmed their attendance in the Constructor’s Design Challenge (we covered it in greater detail back in July). The list includes a diverse array of bicycle craftsmen, from legendary builder Mark Dinucci who’s been building in the Northwest for over three decades and who is named as a key influence on local phenom Sacha White of Vanilla Bicycles (among others), to Massachusetts-based Chris Igleheart and local upstarts like Jordan Hufnagel.

This is an unprecedented gathering of some of the brightest minds in bike building. The innovations they come up with are sure to move the needle of transportation bike design, which is a category of bicycles that the larger bike industry is just now beginning to take seriously.

Bikes built for this competition will be unveiled on Friday, October 2nd and will be judged by a panel of esteemed experts. The bikes will remain on display at the Oregon Manifest Pop-up Bike Union (539 NW 10th) throughout the six-week event.

BikePortland.org is proud to be an official partner of this fine event. Stay tuned for full coverage of all the panel discussions, handmade bikes, bike-cultural exhibitions, and much more. For more information, check out OregonManifest.com.

Useful to mention that the event also coincides with “Dreams on Wheels, Danish Cycling Culture Exhibit.” That should bring an international, and successful, context for shaping Oregon bike culture. Readers may also be interested in volunteering for this event. All found on the Oregon Manifest site.