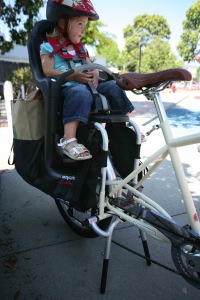 If you want to carry your groceries on your bike, or pick up a load of lumber from the hardware store, there are a lot of bikes out there for you on the U.S. market, particularly longtail bikes — particularly the Xtracycle, the Yuba Mundo, and the Kona Ute.

But wait, you also want to carry a child or two along with all that orange juice and cat litter? That’s a little more tricky.

But times are changing, with Xtracycle’s release this week of the PeaPod LT, the first child seat that is fully compatible with its longtail bikes.

Attaching a kids’ seat to a cargo bike has traditionally been a pain. Todd Fahrner of Clever Cycles came by the office recently to discuss the issue. “Most of the ostensible cargo/utility bikes in the US market will accept no known child seat, without some kind of heavy homebrew modification,” he told us, adding that even the original PeaPod, manufactured by Xtracycle, is not compatible with the company’s own bikes. “The designers clearly weren’t targeting family transport as an option. Maybe fearing liability?”

It seems that every kid seat you see attached to any kind of non-import cargo-oriented bike is attached through sheer sweat and ingenuity — or created custom.

Xtracycle’s new child carrier is the PeaPod LT, which has been designed to carry kids aged 1 to 4 7, and to fit onto an Xtracycle longtail right off the shelf.

This version of the PeaPod replaces the longtail’s top deck, creating greater stability than anything attached to the bikes’ standard, and appropriately named, snap deck. The seat also has a front bar for your kid to hold on to while riding and adjustable leg rests. 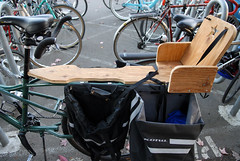 Xtracycle is running a promotion called the PeaPod Pilot Program that will give 50 families a substantial discount on their Radish bicycle with the Peapod mounted. They describe the purpose of the program this way:

Ten years ago our goal was to transform an industry. Now our goal is to transform our neighborhoods. We’ve designed the PeaPod Pilot Program to do just that.

Participating families will blog about their use of the bikes to change the way they get around on a daily basis. Xtracycle will begin signing up intrepid families from around the country in a few days.

Way to go! Finally some common [transport] sense from a bike company for the US market.

This is chipping away at some of the legislative/ product safety foolishness (turning a blind eye) that arose after the 1960s.

By far, the most common passenger configuration I’ve seen for Xtracycles (my own included) is foot pegs (mtb bar ends) and a stoker stem with a chopped-down handlebar, with the passenger sitting directly on the deck, no seat belts. Not a lot of product revenue for that setup, and arguably not very safe for the sub-4-year-old crowd, but works like a champ for long hauls. This story could use mention of this common setup, since it’s very kid/cargo friendly. Pic of the setup I’m talking about

I have the bo-bike maxi on my xtracycle free radical-equipped bike now. Though it was spendy, it is nice because it is out of the way of the free radical, allowing me to use the entire area for storage.

However, when child no. 2 comes along and my girl is older, I will need to mount some sort of seat on the free radical rack. I am already scouting some homebrew stuff.

We bought our Pea Pod at Clever Cycles and it bolted right up our Surly Big Dummy Xtracycle. Fits perfectly. Not sure why they think it requires a homebrew fit.

I think it would be better and safer with a headrest.

I believe the old Pea Pod was not manufactured by Xtracycle as the story suggests, it was simply a Bobike Maxi or Mini marketed under a different name. It did not fit well on our xtracycle set up.

It’s true, the “original PeaPod” is just a Bobike Maxi rear-mounting child seat, called PeaPod by Xtracycle. The “original Peapod”/Bobike Maxi works fine with a standard Xtracycle set-up. I had one mounted on my Xtracycle for a friend’s visit last summer, and I have photographic evidence of other Portland parents using this combination as well.

The difference is that the Peapod LT is designed specifically for the Xtracycle, and includes its own integral Snapdeck along with some improvements to the mounting and the fit. This information is all available on Xtracycle’s web site.

PS Skidmark, the LT comes with a detachable headrest. It is not compatible with helmets.

yeah, we have a bo bike on our extra cycle and I am not in love with it. my son is much more comfortable in the cheapie on our other bike. love the xtracycle so I’ll give this new one a look. right now we use a chariot.

Hi Skidmark,
headrests tend to be a little cumbersome with the helmets – See the Bobike Maxi Plus or the the copilot.

That doesn’t look like it would work for twins? Fortunately (or unfortunately, depending on how you look at it), mine are growing up fast and will soon be on their own bikes. This in between time between trailer and independent riding has been a challenge though!

Thanks Nat for the photo, and Jonathan for the article.

Rumor is that Kona will not touch the baby on back issue with a 10 foot legal pole. This is why their long bike ( called the Ute ) seems to not be seen much, despite it being much lower cost than a new bike and new xtracycle kit.

We have a kid who just turned one. We would like to do a long bike of some type. I’m not willing to buy a seat without some type of head protection.

This LT model seems to go only to the shoulders. My needs come after bearing witness to a mom and kid in baby seat take a spill at parkways. It deeply hurt me just watching. The kid and mom were fine. Kid was in a Blackburn Pilot seat with the head protection.

Granted there are issues with a baby helmet and the seat head protection, but better design is still waiting to happen and the LT does not seem to be anything new, other than cough, marketing.

While a a kid in a helmet is going to hit ground or hard plastic in either seat style, I can see how some seat head protection might reduce head/neck “excursion” in a tipover.

I asked a local injury prevention researcher about doing some bike ride and tipover testing using child crash dummies, but apparently the necks are too stiff to accurately model forces involved in those scenarios. And they don’t make under 1yo dummies. Drat.

So if Big Plastic Fantastic wraparound US-style child seats are your thing, I wonder if you could mount one or two on a new-model Yuba Mundo, kludge them onto a FlightDeck, or seat your child down low in a MADSEN bucket?

Speaking of Yuba, check this seat out:
http://yubaride.com/yubashop/product.php?id_product=24

Looks like that mold is not exclusive to Xtracycle (or Yuba – I read Kettler might be using it too?).

Child seat gossip. Have I sunk this low?

Hey all, Madeline from Xtracycle here.

Julian, all of us at Xtracycle saw your comment today and thought we’d let you in on why we think our PeaPod LT (PPLT) is special. It does look like the Yuba seat doesn’t it? We don’t have exclusive rights over the seat mold. We found a stock seat that was a good initial match for a lontail bike. However, we sourced the same stock seat that Yuba sourced (both companies did their own research and found the same seat!) and made a bunch of modifications to it so the seat performs to our LongTail standard.

Here are some of the things that make it different:

The changes look subtle but we think they make a big difference! The extra year we spent in testing and modification of the seat leads to its higher price. Once we get the double seat configuration tested, we will be selling the PPLT seat for $179.00, until we get it tested, we are only selling the one seat complete with FlightDeck, SuperHooks and Whatchamacollars.

Thanks Madeline for clarifying … I felt silly gossiping about your seat, but was tickled to finally find the other seat that the PPLT had reminded me of.

Your mods sound favorable, and I like a good sternum strap. Our first child seat (the WeeRide) sorely needed one.

A UK commenter over on my blog (http://totcycle.com/blog/xtracycle-peapod-lt-child-seat-preview.html) was wondering why no ASTM testing for 2 seats on a bike. I thought it was a specification issue, but sounds like you’re getting 2 tested?

That’d be lovely, if only for letting you proudly market a 2 kid solution. Thanks for not being coy and legal-risk-averse about cycling a la familia.

I’m surprised you didn’t mention the awesome kickstand you have showing in the picture. One of the more dangerous problems with long tails is balancing the weight once full, with a child and groceries without an efficient kickstand. I know that Extracycle is now fixing this issue but I have many friends still trying to balance their older bikes without new kickstands!