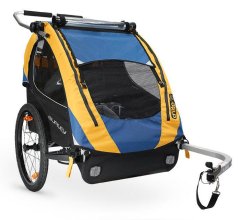 One of two Burley models
involved in a voluntary recall.

Yesterday, the Consumer Product Safety Commission (CPSC) announced recalls for three bike-related products. Two of those three — a child trailer and a cyclocross bike — are popular items in Portland.

The CPSC announced a voluntary recall of about 2,700 2009 “d’lite ST” and “Solo ST” child trailers (both were made in the Phillipines) sold by Eugene-based Burley Design. The hazard is the axle assembly’s internal sleeve which can loosen, causing one wheel to separate from the trailer. “This poses a risk of injury to the child occupant or bike rider.”

Only the 2009 d’lite ST and 2009 Solo ST trailers with serial numbers that begin with D939 or D948 are included in the recall. The products were sold from November 2008 through June 2009. No incidents or injuries have been reported.

The CPSC and Burley say that people should stop using the trailer immediately and contact Burley for a free repair kit. Contact Burley at (800) 311-5294 between 8 a.m. and 5 p.m. Monday through Friday or visit the Web site at Burley.com/STProductRecall. Full details on the recall available here.

Irvine, California-based Felt Bicycles has voluntarily recalled about 1,500 of their Felt F1X cyclocross bikes (which were made in Taiwan).
According to the CPSC, Felt has received six reports of fork steerer tubes breaking, two of which resulted in minor injuries. 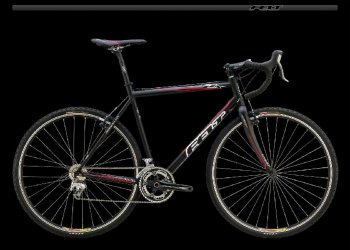 This recall includes all 2007/2008 F1X bikes that were sold from July 2006 through April 2009. Consumers are advised to stop using the bikes immediately and call their local Felt dealer for a free inspection and repair.

The CPSC has also announced a voluntary recall of a limited (about 120) number of Nirve chopper/cruiser bikes. Find out more about that recall here.

I guess the older design with a standard axle is not such a bad thing (though it is a little heavier).