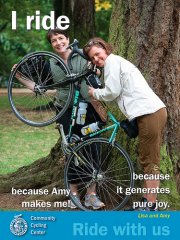 One of a series of posters
created for the campaign.
(Photos by Kim Oanh Nguyen)

Seeking to reshape the image that comes to mind when people think of “the bike community” or “bicyclists”, the Northeast Portland-based Community Cycling Center has launched their “I Ride” awareness campaign.

So far, the campaign consists of a series of promotional posters and an upcoming video that asks a variety of Portlanders to finish the sentence “I ride _____.”

According to CCC Director of Community and Programs Alison Hill Graves, the idea for the campaign was hatched last summer. In an email interview about the project, Graves said when they would bring up the terms “bicyclists” or “bicycle community” in meetings or at their retail shop and classes, the response caught their attention. 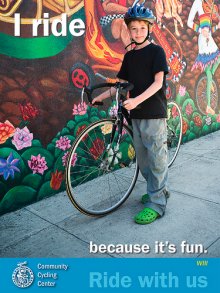 Graves said that response struck them as “pretty powerful and true.” The idea of the campaign is to reinforce the message that people who bike do so for a variety of reasons. “They aren’t necessarily making any kind of statement by choosing a bike and not carrying or promoting any particular agenda,” says Graves.

The CCC has been taking portraits at events like Sunday Parkways over the past month or so and will continue to do so until they feel like they have what Graves calls, “a complete picture of people who ride.”

According to Graves, there’s also a bit of political motive to the campaign. At the Oregon Bike Summit in Salem this year, she felt the vibe from the Capitol building that many Oregon lawmakers don’t have a very flattering view of people who ride bikes. “At the Summit,” Graves noted, “it seemed particularly important to dispel the myth that we’re all scofflaws (blowing through stop signs, hogging “their” roads). Showing a wide range of people on bikes can help reshape that image. Bicyclists are people. Plain and simple.”

Graves hopes to display the portraits at City Hall and other public venues. The CCC has also penned the “I Ride Manifesto.” It begins like this:

“I ride to the grocery store”
“I ride because I don’t have a car”
“I ride for my health”
“I ride everywhere I go!”

When we think of who rides, we think of you. Riding to school, to work, around the neighborhood, for exercise, because it’s the only choice. You are pedaling moms and 5th graders, artists and machinists, retirees and job-seekers, swing-shifters and nine-to-fivers…”

The campaign is being done almost exclusively by volunteers, including the portraits by accomplished local professional photographer Kim Oanh Nguyen.

Read the rest of the manifesto and see more of the posters at CommunityCyclingCenter.org.

Awesome.
We cyclists are all so different and ride for so many different reasons, it’s refreshing to see these posters.
The volunteer element of their production is supercool as well!

Yep, good approach. The so-called Portland “bicycling community,” of which I am a part, could use some help shedding our image as a bunch of sweaty, angry, naked, Critical-Mass, anti-car activists. Biking is fun, plain and simple, and the more people we have biking casually, the better off we’ll all be.

I was thrilled when I saw my photo in the mix… (2nd version of the “everywhere” quote). 😀

My bike was silver and grey back then…

I always knew we were regular people. Feels good to be recognized. Myself, I ride to see more.
Ride safe, everyone

This is a good step. Now we just need to work on policing ourselves so that a raucous few don’t ruin things for the rest of us (cough..idaho stop law..cough).

These would make great “trading cards” to be pulled out and shared during “cycling community” debates.

Coworker: “cyclist are a bunch of anarchist law breakers”
me: “you mean these people? (handing card of I-ride-with-my-family woman and I-ride-because-its-fun kid)”

Thanks for all of the positive comments, folks! Just wanted to acknowledge the expertise of two volunteers who were integral to the creation of this campaign: Kim Nguyen (the photographer mentioned above) and Marbry Walker, a very talented designer.

right in the wheelhouse of a positive marketing campaign for cycling

i ride because it’s faster

I ride because it’s the closest thing to having your destiny in your own hands.

…and also because it’s simply the superior mode of transport.

…and because 10 years from now there won’t be any choice.

Now would someone please “do something about” all these cars. They don’t belong on our roads!

What a wonderful idea…

I love it!! Every kind of person rides bicycles. The more normal it gets, the better!!

How can I get some of these posters?

this is awesome. And, for the record… I ride because it makes me alive the way cars make me feel dead. (some of us really do hate cars… but I love people! Including the ones in the cars.)

This is fantastic. Well done!

Because it keeps me from getting old.

Because some car repairs cost more than a replacement bike!

Because it makes me appreciate the energy it takes to move mass.

I ride because I hate conformity, adore anarchists, nudie cuties and the non-spandex folks who actually smile when they pass me. I got a wide seat, enough room for all (57 and blue collar)

Wow! I had no idea that they would use my ugly mug for one of the posters.

Next time I’ll wash behind my ears.

If I criticize this program, it’s not because I don’t like it, necessarily. Here we go again though with a rather small number of people self-assigning themselves a voice for all cyclists. The very diversity which they wish to draw attention too, is the same diversity that should give one pause before speaking for the entire community.

I am also not fond of the way in which these private groups, with heavy personal agendas, are permeating the downtown civic environment. Banal or not, the CCC is not a city entity, and I’m getting a little tired of seeing their logo splattered all over the city site. Now I see BikePortland is there too. Not kool guys.

Since when do we as a city pick and choose amongst private enterprises to endorse? Since when is the CCC the voice of all bicyclists. Why should I believe them when Scott Bricker says the exact same thing? So which special interest lobby is speaking for me today? I’d like to know what I think.

This choice faced us back in the day too. Include all cyclists, and spend your days explaining away the DUI riders, and fixie posers, or throw those riders to the wolves, and serve your own self-interest. We couldn’t come to a conscionable conclusion. It’s good to see the current regime is a lot less sensitive than we were.

More riding, less talking. Judging from what I see on the roads these days, you all had better hope you don’t cause a ban on gas-burning motors. Most of you could use one on your bikes.

This is a great campaign…I actually turned down an opportunity to be interviewed for this, as I didn’t really understand what they were doing/ asking. Now that I see it I wish I would have participated…and I would have added some modal diversity to the mix.

I ride because it is often faster than driving.

I ride to avoid paying for parking downtown.

Some members of the Portland Cycling Community love greasy cars as well as bike chains. Maybe that story is not told enough?