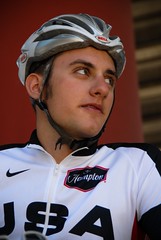 Local racer Jacob Rathe has his
eyes on a top finish in
Moscow next month.

18-year old Portland resident Jacob Rathe has been selected by USA Cycling to be of four junior road racers that will represent the United States at the upcoming Junior World Championships in Moscow, Russia.

For Rathe, a recent graduate of Lincoln High School in downtown Portland, this is the second year in a row he’ll don the stars and stripes jersey. Last year, he traveled to Cape Town, South Africa (we caught up with him right before he left) where he finished mid-pack among the world’s top junior racers.

Rathe is a member of the Hammer/CMG Racing Team which is managed and coached by two-time Olympian Oliver “Butch” Martin (member of track team in 1964 and 1968).

Rathe will look to improve on that result this year. He has shown excellent form this season with several regional road race wins and, according to Oregon Cycling Action, top ten finishes in European stage races earlier in the year.

The Junior World Championships Road Race will be held on August 9th.

More on Rathe and his prospects for the race at the Oregon Cycling Action blog. Browse a few more photos of him in the gallery.

Awesome 😀 I remember you doing an earlier post on him, so glad to see him being successful

This is great to see! More juniors development here in the US!

Congrats to Jacob, again, keep up the hard work.

Open question: What is available for juniors, youth development racing in Oregon? What is possible? Who is working on it?

This is incredibly good news for Jacob.

to address Tommer’s question, Junior cycling development is one of the weakest aspects of USA Cycling’s program, which is unfortunate if you want world class results. to futher the problem, USA Cycling has essentially cut off all track racing development unless you are already a world champion caliber rider. Most European, British, Australian, Newzealand etc. pro riders develop as young racers on the velodrome as well as the road. So let’s build on an already great new rider development program with OBRA and regional cycling organizations based out of a new velodrome!! http://bikeportland.org/2009/07/07/velodrome-backer-sees-perfect-opportunity-in-memorial-coliseum/

Good to hear that experience is not getting thrown away–coach Oliver Martin was one of the few 1960’s US racers with European road racing experience; he’s Italian on his mother’s side and raced over there for several years.