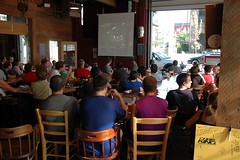 Tour de France viewing parties, like this one
at the Lucky Lab in 2007, can be
found all over Portland.
(Photo © J. Maus)

With six stages down and 15 to go, the Tour de France is just getting warmed up.

For some reason this year, the race is already exciting and the action hasn’t even hit the mountains. A guy named Lance has a lot to do with the buzz, but the bottom line is that more people than ever seem to be tuning in.

And what’s not to love about this race? Amazing scenery, athletes at the top of their form, the highest of high-tech bikes and equipment, team rivalries and gossip, sprint finishes, and much more.

So, how can you catch the action? Whether you prefer to catch it on your phone, your TV, or at your favorite cafe or pub with a group of rowdy fans, here are some suggestions. 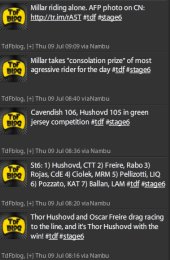 Twitter
This is the first year that Twitter has played a big role in how people follow the Tour. I’ve been following @TDFBlog, @BikeHugger, and @HeidiSwift for a good mix of live updates and commentary. If you’re hardcore, try following a search for “#tdf” or “#tourdefrance”.

Another great thing about Twitter is that you can get updates directly from racers. @LanceArmstrong posts consistently and has fun videos and photos. Many of the riders are on Twitter this year. For more, check out the lists here and here. 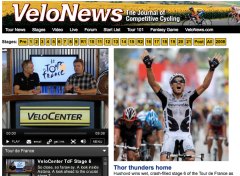 Blogs/Online
If you haven’t starting using Twitter yet, there are a million places online where you can get your Tour fix. D.L. Byron of BikeHugger has a dedicated Tour “Hub” this year (which includes a live chat feature during stages) and both VeloNews.com and CyclingNews.com have full coverage with loads of photos and reports.

Also online are the many sites (most not quite legal) running free, streaming feeds. I started watching it live on Justin.TV but that feed got pulled. I’ve also heard of a Pakistani-based site that some folks are having good luck with.

Good Old-Fashioned Television
Versus is the exclusive TV channel for the Tour this year. Check out their schedule here and hopefully you won’t be the victim of those pesky, last second commercial breaks.

Local cafes, pubs, etc…
Laurelwood Brewing Company
Laurelwood will be showing the Tour at three locations; NE 51st and Sandy, NE 4th and Sandy, and NW 23rd and Kearny. As an added incentive, the owner will donate money to the Lance Armstrong Foundation for every customer who comes into any one of his establishments during the entire month of July.

La Musette Dining Club
This is simply awesome: Portlanders Fred Lifton and his wife — professional chef Laura Ohm — have created a special, Tour de France-themed supper club. With the race on a big screen TV, they serve a six-course dinner that comes complete with traditional dishes, and wines and cheeses selected from the regions through which the Tour passes on that day’s stage.

To make it even better, each night Fred and Laura award a “Plat Jeaune” (Yellow Plate) to the person who rides the furthest that day. Learn more about La Musette Dining Club on their website. (Fred says spots are still available for July 11th and 25th).

Saint Honore Bakery
St. Honore (2335 NW Thurman and 315 1st St in Lake Oswego) has been showing the Tour live for several years now (I wrote about them way back in 2005). The authentic French bakery is a perfect setting to watch the race and bike jerseys are the preferred attire.

And, thanks to Heidi Swift at the Everyday Athlete Blog for the following tips…

Madison’s Bar and Grill
Madison’s (1109 SE Madison St) is showing replays of the Tour and Heidi says they’ve got a great selection of Oregon-brewed beers (and they’ll give you your first pine for $2 if you mention her name).

Are you following the Tour? How are you getting your fix? Share viewing suggestions in the comments.

Has anyone found a decent video stream from the internet that does not involve a credit card?

nope, not yet. in the wake of universals *excellent* coverage of the giro, im feeling spoiled. most of the english-language live feeds out there get the kaibosh put on them by about 630-7 am. keep your eye on http://www.cyclingfans.com/ and http://www.steephill.tv/tour-de-france/#live – both are putting up listings of live feeds daily. usually you can get some eurosport (decent coverage and commentary, and a good perspective from outside the lancelancelanceastanaleipheimercontador lens of the us coverage), versus (even the live coverage is infuriatingly commercial-laden, though better than the prime-time “expanded” coverage, which is *unwatchable*), and various foreign-language feeds, many of which are geo-restricted unless you know how to get around that.

for a while i was tempted by versus pay-to-watch streaming, but if im going to shell out $$ to watch the tour, i expect something better than what versus is offering, which spends WAY too much time away from the race for my taste.

also, is it just me or has cyclingnews.com live text coverage also gone down the crapper? it seems half the commentary these days is designed to direct you to their forums, and their feed doesnt refresh with any regularity at all. that used to be my go-to place for live text coverage, but im beginning to lose faith – but im not jumping ship to that dad-blasted twitter bandwagon 🙂

I watch it up at Claudia’s for the 5p.m. show. 30th & Hawthorne. It is usually on the big screen.
kev

I’ve just been watching the free live stream on versus. as long as you are able to be watching when its running you don’t have to pay, and it’s even commercial free to boot 😉 i shuts off shortly after the stages complete, sometimes you get a little of the interviews with the riders, but i shows the most important stuff.

justin #4 – whats the link for the free live stream on versus? it always comes up for me as costing $2.95/day…

I’d pay any amount of money to not have to listen to Craig Hummer and Robbie Ventura. I wish those two yocals would go back to crit racing in the midwest where they came from.

If I think I’ll have time in the evening, I will DVR the morning coverage (which I never get to see the finish of) and watch it at night. Fast forwarding through all the dull commentary and commercials is the best way to watch. But it does cost something for your cable and DVR, so NOT free. Lucky for me, the hubby usually pays the cable bill for the household.

@5
I just went to http://www.versus.com/tourdefrancelive

When i do i get three options, the Free one with gps tracking, etc, the 2.95 one and the other one… during race time when i click on the free option i get the video stream. Maybe i’m just lucky

All of you guys posting about getting it for free from Vs — Shhhh! They’ll find out!

The versus stream isn’t bad. If you haven’t heard of the DVR, it is a pretty good invention. Just start watching 20 minutes late and you can skip all the commercials and pretty much everything else you don’t want to see.

even if LA comes in dead last, he will still be the best cyclist of all time! EVAR!!!!

Do any of the places showing the tour in town have a satellite feed? In other words, is anyone showing it on a network besides Versus? Because versus really bites.

If I’m not mistaken, all international TV stations use the same video feed. The only difference between them is the quality of the commentary and the frequency of commercials.

If you don’t like the commentary of Versus and understand French or Dutch, you can turn off the commentary of the TV and turn on the live audio stream of the French or Belgian radio station that covers the Tour (France Info or Sporza Tour). Unlike Versus, these guys have their own reporter on a moto in the race, who provides all kind of details that the reporters at the finish have no clue about. Sometimes they interview racers during the race. And during the big stages they often feature former Tour stars like Bernard Hinault, Eddy Merckx or Lucien Van Impe as guests, providing their take on things and rehashing stories from the good old days of cycling.

Certainly am following the tour the “old” fashioned way, on television. Versus live coverage in the early morning beats their “extended” coverage in the evening, mostly because of the commentary by Ligget and Sherwyn. Now, a city that hosts “Flicks on the Bricks” might think a little about approaching that big sports apparel company out in the suburbs to host a night of race viewing at Pioneer Square. Need a beer garden, though.

http://www.steephill.tv/tour-de-france/ has the most options – noticed that versus had the last several km commercial free today – good move!

The bittorrent downloads are my choice. I watch the ITV4 recap every night. It usually comes up around 4 PM or so and is condensed to 1 hour.

The full coverage is also available for download but I don’t have that kind of time!

Versus AM coverage on DVR is great…I can FF right on past all the BS from Frankie Andreau and Robbie Ventura. In the end I am watching mid stage to finish coverage in an hour to 90 minutes.