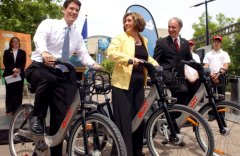 Unlike other projects that the City of Portland has been accused of rushing into (the Sauvie Island Bridge relocation attempt and the Lents/Memorial Coliseum baseball debacle come to mind), no one can ever say that they moved too quickly on bike-sharing.

It was back in February of 2007 that we first reported that the City of Portland was looking into a bike-sharing system. After putting out an official Request for Proposals, the City was close to finding a vendor, but ultimately canceled their search last summer.

All the while, then Commissioner (now Mayor) Sam Adams’ office maintained that they were still interested in bike-sharing, but realized they needed to learn more before making a decision.

Back in November of last year, Sam Adams’ Chief of Staff Tom Miller learned more about bike-sharing during a work trip to Stockholm and shared his findings in a six-part series published here on BikePortland.

Miller wrote that his experience in Stockholm was “enlightening” and that Portland’s “time will come.”

Now comes word from the Bureau of Transportation that they are re-opening the bike-sharing dialogue. PBOT plans to host two “public bike sharing demonstrations” in August. The first one, on August 14th, will be held mid-day at Waterfront Park. The second one will be part of the Sunday Parkways event coming to Southeast Portland on August 16th.

In a statement about the demonstrations, Mayor Adams said,

“We are conducting this demonstration in part to see if bike-sharing is a necessary ingredient for Portland to become a world class bicycling city. Bike sharing is an exciting concept that has shown promise in Europe. But given the expense of these systems, I want Portland to move forward prudently and with as much information as possible.”

So far in North America, only Washington DC and Montreal, Quebec have what PBOT refers to as the “latest iteration of bike sharing systems” in place.

In DC, Clear Channel has launched “SmartBike DC” which, according to The Bike-sharing Blog, has a total of 120 bikes and around 1,000 members signed up since it launched last summer. 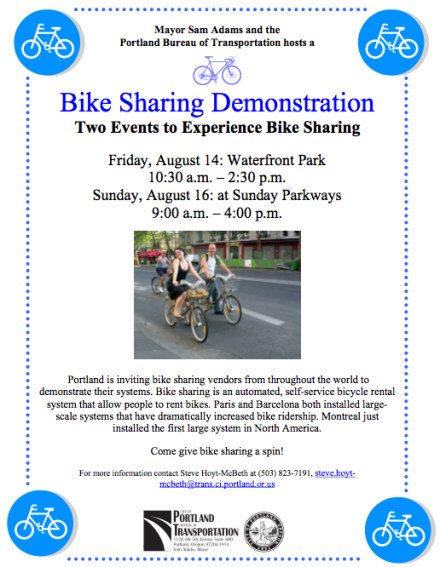 PBOT flyer for the bike-sharing demonstration events coming in August.

In Montreal, city officials created their own system from the ground up. Dubbed “Bixi“, the Montreal system, which launched back in May, is by far the most ambitious in North America and features 3,000 bikes at 300 stations in that city’s downtown core.

Steve Hoyt-McBeth, the PBOT staffer in charge of the bike-sharing project says he has a tentative agreement from Montreal officials to bring their Bixi system down for the demonstration. Other vendors he hopes to get in front of Portlanders are bCycle, the partnership between Humana and Trek (formerly known as Freewheelin’), Clear Channel, Veloway from France, and others.

PBOT has put out an official Request for Information. You can read it here.

Hoyt-McBeth says the demonstrations will be used to gauge not only people’s preference for how the different systems and bikes work, but to find out if Portlanders feel bike-sharing is something that would work in Portland. It’s likely that Adams wants to make headway on the bike-sharing project so that any decisions can be woven into the Bicycle Master Plan which is slated to go in front of the Planning Commission on August 25th and be adopted by City Council in October.

Hoyt-McBeth will make a presentation about bike-sharing in Portland at a Brown Bag Discussion at the Portland Building on July 16th. More details on that event here.

— Browse our bike-sharing category page for all our previous coverage.

I’d like to see this implemented in Portland. I ride my own bike to work, but it’s not convenient to get my bike out of the parking garage to go to lunch, or the library during the day…would be great to jump on a shared bike and head off.

When I moved here ten years ago, I was told about yellow bikes that were left here and there around town for people to use, free of charge, and then leave for the next person wherever they dropped it off. I never did see any of those yellow bikes.

Was that whole thing a myth or are some people still, um, borrowing them?

I sure hope my grandkids live long enough to see Portland’s bike-sharing system. That would be special.

As a former Yellow Bikes(YB) volunteer, we “dumbed down” bikes by making them single speed, and replacing tubes with rubber hose that made for a hard ride. Inevitably,those bikes we ‘released’ would end up lost/stolen’destroyed. The Community Cycling Center, our fiscal sponsor, ended up killing the program and replacing it,later on, with Create a Commuter (CAC). CAC has an element of ownership and personal investment,something YBs lacked.

There are few parallels to draw between YB and the Citys bikesharing program. There is a sense, with the Citys’ program, of personal responsibility for any bikes you rent. YBs had a fuzzy sense of ‘ownership’..hey,if its free,its ok to take it.. or destroy it,it doesn’t BELONG to anyone.
I wish the City success.. and hope we as a community do all we can to help the City be sucessful.

I happen to be from Romania. So in the news from my country, they just discovered a bunch of dedicated cyclists that were “borrowing” about 10 bikes/month from the Paris bike share program for a very long one way trip east.
These things keep popping up in the strangest places, like Marrakesh Morocco. I am sure the meth-heads of outer SE would become avid cyclists as well!

CD-
Any tales of caution from that program? Just wondering if there was something the Paris program lacked that perhaps we could implement here, some way to keep people from stealing the bikes. I would hope the city would find some method for striking a balance between getting credit card deposits to discourage thefts, but still making the rentals affordable for lower income individuals.

Notable from the Montreal Gazette:
http://communities.canada.com/montrealgazette/blogs/ontwowheels/archive/2009/06/27/dozens-of-bixi-bikes-missing.aspx

Bike sharing programs are a proven failure wherever they are tried. This is nothing but a waste of money, but hey I guess it makes Portland liberals feel all warm and fuzzy.

Edison was said to have “failed” countless times in his search for a viable light bulb filament. The warm and fuzzy people of Portland have some qualities in common with Edison — tenacity and the liberal use of thought to improve upon the status quo.

I think it is wise to approach this with care. It’s not clear we need this, it will certainly be expensive, it would be discouraging if it failed, and other places are actively working out the bugs for us. In another few years we’ll know much more about their experiences.

Incidentally, I would just ask that Sam bring the same skepticism to other expensive endeavors – e.g., backing soccer and/or baseball stadiums.

I was just in Italy and a bunch of cities I visited had bike sharing. Tourist could even use them for free once giving a small deposit and an ID. They tracked who had which bike (based on a key system) and it seemed to work well. Not sure what the loss rate is though.