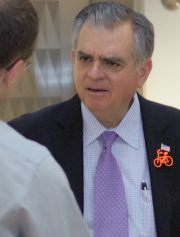 The proposal is being made in an attempt to replenish the ailing Highway Trust Fund that could run out of cash by late August.

Also, beyond the 18-month mini-reauthorization, LaHood wants to reform the bill to help the federal government, “make better investment decisions with cost-benefit analysis, focus on more investments in metropolitan areas and promote the concept of livability to more closely link home and work.”

Perhaps sensing the eyebrows this move might raise on Capitol Hill, LaHood added that, “with the reality of our fiscal environment and the critical demand to address our infrastructure investments in a smarter, more focused approach, we should not rush legislation.”

As we reported yesterday, Congressman Jim Oberstar is planning to unveil a white paper on the new bill in a live webcast tomorrow.

On their blog minutes ago, Transportation for America wrote:

“No word yet on how this will affect the proposed transportation bill outline to be released by Rep. James Oberstar tomorrow morning.”

The Wall Street Journal reports that Oberstar isn’t too keen on LaHood’s idea:

“But the Chairman of the House Transportation Committee, Rep. James Oberstar (D., Minn.), opposes such a long delay in attacking the nation’s long-term infrastructure-financing problem, and he wants to increase highway funding significantly starting in October.”

The WSJ also reports that Oberstar said on Wednesday that an extension of the current law is “unacceptable,” and that, “Now is the time to move.”

It’s clear that the Obama administration has plenty of other huge battles going on right now (world security issues, health care reform to name a few) and they may not be keen on adding transportation to their plate. Also, let’s face it, transportation reform is not exactly a hot issue in America. Sure, everyone hates congestion, but when’s the last time you heard of a transportation issue figuring into an election?

thanks for gathering this news and reporting it. I’m anxious to see where all of this takes us.

Dude, way over my pay grade to figure out what da genius is really sayin’.