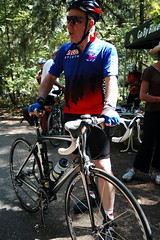 On Thursday (6/18), U.S. Congressman Jim Oberstar (D-MN) is expected to release a white paper outlining his plans for the forthcoming re-write of the federal surface transportation bill (Oberstar is Chair of the House Infrastructure and Transportation Committee).

The current bill, passed in 2006 and known as SAFETEA-LU, will expire on September 30th. Many bicycle and sustainable transportation advocates are eager for a glimpse at what’s on Oberstar’s mind. They hope he makes good on the positive signals being sent from U.S. Department of Transportation Secretary Ray LaHood, that this bill will chart a new course for America’s ailing transportation system.

LaHood has been talking up “livability” and “sustainable communities” for months now. In a blog post today, he outlined six “livability principles” that will guide how the Obama administration approaches transportation. 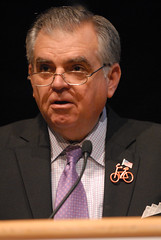 At the National Bike Summit
in March, Ray LaHood
told bike advocates they’d
have “a full partner” at
the US DOT.

“We have a window of opportunity to think differently about transportation and propose bold, new approaches to improve the livability of our nation’s communities.”

Sounds exciting. But make no mistake about it, a major change to the status quo (highways) will likely take a big political fight.

National non-profit Transportation For America — who wants the bill to “establish clear goals, empower our communities, and make smart investments in public transportation, highways, rail, and biking and walking facilities,” — is ready and waiting for details on the new bill. They’ve published a scorecard they’ll use to see if it “makes the grade.”

For excellent coverage as the T-bill action heats up, bookmark the new DC edition of Streetsblog. I’ve learned a lot in recent weeks from Elana Schor’s reporting and she covers all the important livable streets-oriented details you won’t get anywhere else.

You can watch the news conference unfold live. Check http://transportation.house.gov for the live webcast on Thursday at 8:00 AM PST.

Some last minute changes have delayed our news conference on the transportation white paper by one day. It will be June 18th at 11:00 AM EDT. You can watch it live at http://transportation.house.gov

Thanks John. I’ve edited the story to include this information. — Jonathan

Your close coverage of this issue is appreciated, regardless of how many comments (or eyeballs) it generates. This is a rare paradigm-shift opportunity in federal decision-making that has significant direct and indirect implications for the relative bike-friendliness of Portland’s streets. Please give this issue everything you’ve got. Thanks, and keep up the good work.

I look forward to see if the rhetoric matches the realities. If there is a sea change during this administration, it must be acted on swiftly, both for economic reasons ( jobs and to build momentum) as well as to get far enough into the process that it couldn’t be stopped should Obama not run for term #2,or the House or Senate change leadership hands.