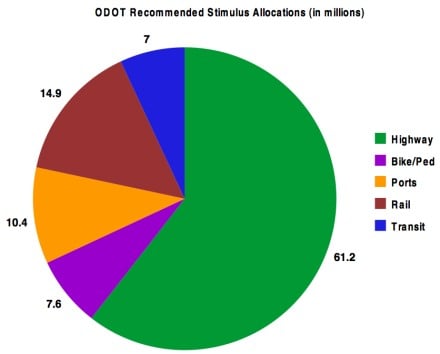 This graph shows a modal breakdown of ODOT’s recommendation for how to spend the state’s remaining $101 million dollars in federal stimulus money.
(Graphic: J. Maus/BikePortland) 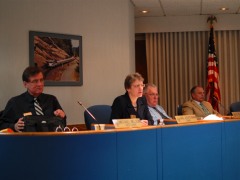 The Oregon Transportation Committee at
their meeting this morning.
(Photos © J. Maus)

Oregon received a total of about $410 million in transportation funds as part of the American Recovery and Reinvestment Act (ARRA). Today, at their Salem headquarters, the Oregon Department of Transportation (ODOT) presented a recommended list of projects to be funding with their remaining federal stimulus allocation (here’s what they did with the first batch).

According to a staff report made public at the meeting today, over 330 projects totaling over $500 million were received for the remaining $101 million. ODOT held a public meeting on March 11th to take public testimony on the projects. (According to folks I talked to this morning hundreds of people showed up and the meeting lasted over four hours.)

Before I share more about the projects that made the cut, here are the criterion taken into consideration by ODOT:

In their report, ODOT stated that, due to the very tight timeline for allocating this money (the application was released on March 3 and projects were due on March 9th),

“Time constraints did not permit a completely objective scoring analysis; rather judgment and knowledge of the transportation system from many disciplines was used to determine projects that best met all of the criteria.” 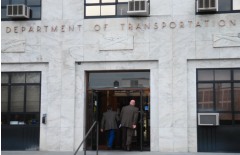 Through these doors are the people
that decide the fate of our state’s
transportation system.

How did that judgment go? In their report, ODOT says that “The resulting list of projects offers substantial investment in all modes of transportation,” and that, “The list no longer includes just state highway projects, but rather projects from across modes.” They also repeatedly emphasize that, “The fundamental principle used to develop the proposed list has been job creation.”

On that note, here’s the modal split of ODOT’s $101 million list:

There are 14 total bike/ped projects being recommended for funding by ODOT (they will present this list to the Oregon Transportation Commission (OTC) for final approval later today). Of those, 8 of them are sidewalk projects. Only one of the projects in is Portland and it is a $2 million “Sidewalk Infill Program” for Southwest and East Portland. This project was applied for by the City of Portland Bureau of Transportation’s pedestrian program manager April Bertelsen.

The $2 million for sidewalks in those oft-neglected areas of Portland will be seen as a solid victory for Mayor Sam Adams. Adams wrote (via Twitter) a few minutes ago that this is “Great news for SW,” and “We fought hard to get this.”

According to a project list distributed by 1000 Friends of Oregon, Portland put in 10 total bike/ped projects for consideration. The only one that had a bicycle component was a $200,000 project to help pay for more bike parking on the Portland Mall that was put forward by PBOT bike parking manager Sarah Figliozzi (and who can blame her, given how much bike racks on the mall cost them).

This begs the question: Where are all the good bike projects? (It’s hard to get funding for a project if it’s not even in the running.)

For a bit of perspective on the $7.6 million recommended for bike/ped, ODOT recommended $9.2 million for a “Highway – Preservation” project that will go toward 15 miles of “pavement preservation” and “upgrading and repair” of guardrail.

This list as I’ve reported above, is ODOT’s recommendation for how the state spends this remaining $101 million. Later today, they’ll ask the OTC to approve the list. It’s possible that the OTC will ask for different projects to be included, but sources tell me that ODOT’s recommendations are likely to stay in tact.

Stay tuned for more from Salem.

[Editor’s note: The report above was made from materials gathered at today’s OTC meeting at ODOT. The actual presentation is coming later in the day, but I might miss it in order to be present at the Idaho Stop Law hearing.]

This rant is a little off topic, but I feel should be pointed out, especially since so much goes for highways. The stimulus money is borrowed money whose balance is dumped on future generations. This is allowing the legislators to postpone raising the gas tax enough to make sure that road users pay the true costs of highways & driving. Studded tires are estimated to cost Oregon $500 million in preventable road damage every year. Anyone looked at our roads lately? Saving money is as important as spending it. Banning studded tires is free money and doesn’t cost future generations their potential future. It’s time the legislators made decisions that are good for all the people of Oregon.

jonathan, i didn’t find a link to the proposed projects on ODOT’s $101 million list…? any idea what the 14 bike/ped projects (total $7.6 million) proposed for funding are?

Not a single penny going to bike improvements in Portland? Crazy.

Californians pass a bond bill to spend $8 billion on bullet trains and when we’re getting $101 million for free from the feds we only spend $15 million on rail? Lame-o-rific.

And they market this state as being ‘green’?

i don’t have an electronic version of this list yet. it will be released end of day today I’m sure. will update the story once it is.

@Peter W – we actually passed a bond bill for *ten* billion, not eight 🙂

I think the problem lies in the definition of “shovel ready.” Projects need to be fully designed and literally ready to be bid on by contractors in order to receive stimulus dollars. That’s a severe barrier to doing anything innovative, and skews projects toward cookie-cutter style projects like paving existing roads and pouring a sidewalk.

one of the big barriers to getting more bike projects into the shovel-ready queue is that bike lanes and other facilities trigger a ton of ridiculous, outdated federal regulations (written by highway planners) that require a lot of process and red tape… combine that with bike projects being under-prioritized at the agency level and you have very few of them getting on these important lists in time to be funded.

at least that’s my sense of the problem so far.. i’m no expert!

#6 is right; the “right now” nature of the stimulus package establishes an implied bias for maintenance of the status quo. How else can one explain why Governor Kulongoski, who has staked his entire gubernatorial legacy on positioning Oregon as a leader in the emerging green economy, would allow his direct appointees to push so much money towards the most harmful, least green travel mode of all?

Actually there’s one more reason: ODOT. ODOT’s culture is good ol’ boy, project-driven, autocentrism. That’s not a critique; those are observable facts. ODOT and the highway lobby are synonyms.

bummer. when will this country/state change its wack priorities?

There are sacred cows in the tax code and fiscal policy, which are assumed to be effective as an economic stimulus for job creation but in fact, are not.

First off, big thanks to April Bertelsen at PBOT for your hard work on a really short timeframe to bring $2 Million for some of the most sidewalk deficient areas in Portland. Great work! Thanks also to Jess Laventall in East Portland, Marianne Fitzgerald in SW Portland, and Robert Liberty at Metro for their good work on this.

As for the more general discussion of the project lists, I absolutely agree that list was seriously weighted toward highway and there wasn’t nearly enough transit, bike and pedestrian infrastructure.

At the same time, I’ll give Portland some credit here. In addition to the state funds included in the pie chart, Portland got $14.7 Million for transportation locally. They included $1 Million for bike boulevards, and a number of the paving projects also included bike and pedestrian improvements. (They also listed $1.8 Million for the Springwater Trail, but I’m not clear on whether that’s a go or if it’s on the backup list in case other projects aren’t ready on time.)

One last thing… Portland didn’t initially include any money for sidewalks in East and SW Portland, which upset a lot of people, particularly as it was right after the East Portland Action Plan was passed. A lot of frustrated folks spoke up, and the city responded by finding $2 Million in ready to go sidewalk projects. So I’m giving a shout out to the city for responding to the public on this one.