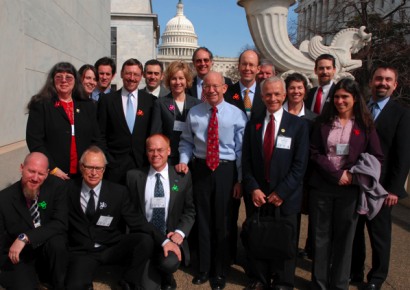 Oregonians, you should be proud. The team you sent to represent you in Washington is nothing short of an All-Star Team. And yesterday, I had the honor to accompany them for a full day of meetings with Oregon’s Congressional representatives on Capitol Hill. The day started early with a warm-up reception held in the House Office Building. After getting our marching orders from League director Andy Clarke, Congressman Earl Blumenauer stepped up to the lectern. He told us about a budget meeting he was in last night with President Obama. According to Blumenauer staffer Tyler Frisbee (who I talked to later), Blumenauer had a few minutes to present to Obama.

As he began outlining his ideas on the importance of transportation, he mentioned funding challenges. At that point, according to Blumenauer, Obama piped up with, “You mean, there’s not enough money for bikes?!”. “The big guy’s on message,” Blumenauer said with a grin.

After his talk, and a bit more mingling, we set off to our first meeting with Rep. David Wu. With such a large group, we couldn’t fit in Wu’s office, so Wu’s Legislative Assistant, Nils Tillstrom, walked us down to the Rayburn Cafe (named after the building we were in). The meeting went very smoothly and I was impressed at how the group smoothly made their pitches and presented their ideas. Of course, Tillstrom — an avid bike rider (and daily BikePortland reader he told us) — is an easy ear, but even so, I think he learned a lot.

Our diverse group could speak with expertise about a variety of issues including: the bike industry and the development of Oregon’s bike economy, the impact of biking on Portland’s business climate, the importance of bike tourism, issues in Washington County, the tremendous cost-benefit and value potential of investing in bicycle projects, and so on.

After meeting with Tillstrom, we met with Rep. Peter DeFazio. In Rep. DeFazio’s office (he’s
at left in blue shirt).

DeFazio seemed tired and battle-weary (maybe it was because the meeting before us was with ODOT’s CRC project staffer), but he warmed up after the group got him talking about riding mountain bikes in Oakridge and coming out to Cycle Oregon this year. DeFazio shared a bit of his feelings about Obama’s transportation budget; “It’s horrible,” he said, “there’s a flat line on bikes.” But not to fear, he added, the President’s budget changes a lot once it goes through the House and Senate.

On the topic of the budget, DeFazio told us his big idea to bolster the transportation budget. He wants to put a $1 a barrel tax on oil which he says would raise a whopping $6.5 billion (Billion) a year. Sen. Merkley outside his office.

>After DeFazio, it was over to the Senate side of the hill for a meeting with Sen. Jeff Merkley. Merkley had to run off, but he addressed the crowd and thanked them for their work before leaving. We met with Merkley’s Legislative Assistant Jeremiah Baumann. Baumann is new to D.C. and he is the former leader of the big, statewide non-profit Environment Oregon.

After the Merkley visit, the group split up and had meetings with Blumenauer, Rep. Kurt Schrader, and Sen. Ron Wyden (who, according to folks at the meeting, was very excited to talk about bikes). Through all the meetings, the group spoke with authority and clarity. It was an impressive showing. After the meetings was the big Congressional Reception party. Held in the old and very stately Senate Caucus Room, this was the last event of the Summit where all the attendees were present. As advocates and industry leaders from all over the country mingled over snacks and drinks, League Director Andy Clarke rattled off the day’s successes and introduced several members of Congress who had joined the party.

Here are a few faces from the crowd:

It was a fitting way to end the hard work of the 2009 National Bike Summit.

I am glad you are there!

This is a superb post. I love seeing what you guys are doing in DC.

Just thought that I should mention that Nils Tilstrom is a bit more than “an avid bike rider”. Nils raced bikes as a junior in Oregon. He was a Team Oregon member. He went to college in Caolorado, racing theer and then later working for American Cycling Association. He rode the Alpenrose Six Day with my son one year and was a featured foreign rider at the Manchester Velodrome in England.

Where do I send the money to bribe our reps in D.C.?