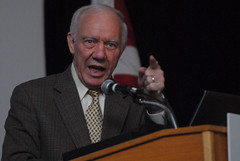 Representative Jim Oberstar (D-MN) — the man whose passion for Safe Routes to Schools helped establish it as a national priority in America — is now throwing his energy behind a new idea. And, as Chairman of the House Transportation and Infrastructure Committee that will be writing the new transportation bill, Oberstar’s ideas have real potential to turn into policy.

Today at the National Bike Summit in Washington D.C., Oberstar will meet with the country’s top bike lawyers to discuss the potential of a new legislative initiative to draft the country’s first piece of legal policy that would directly relate to the respect and recognition of bicycles as users of our roadways.

According to Portland bike lawyer Ray Thomas, he was one of a handful of legal minds tapped by the League of American Bicyclist’s Advocacy Director Walter Finch to meet with Oberstar to discuss the idea.

Thomas, along with Portland lawyer (and author of Bicycling and the Law) Bob Mionske, well-known cycling lawyer Gary Brustin, and others will be asked for their insights on how to best move forward with this initiative (unfortunately, both Mionske and Thomas were unable to make it to the Summit, but I have heard that BTA Executive Director Scott Bricker might represent them at the meeting).

Thomas describes the initiative as a way to create a federal law to ensure equitable treatment of people on bicycles who are involved in crashes. Too often, he says, drivers do not receive serious charges in collision cases. The way the system is set up now, police officers and prosecutors (for a variety of reasons) will often not even attempt to press serious charges against motorists.

Oberstar wants to fix the system so there’s a better chance that justice will be done.

League of American Bicyclists Executive Director Andy Clarke told me this morning that the initiative could result in language being put into the transportation bill that would give more “legal standing to bicycles as a mode of transportation”. Clarke mentioned the precedents of federal regulations about how states must comply with blood-alcohol level and seat belt usage laws.

This conversation is only in its infancy, but with Oberstar at the wheel this is definitely worth paying attention to.

This story is part of our special 2009 National Bike Summit coverage. For more coverage, follow BikePortland on Twitter and browse the latest photos in our Bike Summit photo gallery.

I wish this was already in effect, maybe the driver who intentionally hit me then drove off would be facing more than a slap on the wrist.

Kevin, that’s horrible. It’s worth making this an easier link to read: tinyurl.com/bluesuv .

If you’re riding narrow-shouldered highways often, you might consider doing what this guy did: http://www.youtube.com/watch?v=wJmxCuPiM0c.

And now, back to the topic at hand (sorry for the OT).

The guy who’s in that YouTube video follows my blog. I’ve got that clip embedded in a blog post a few weeks ago.

Great news…next on my list is to find some good ‘bike insurance’ (protection against non-insured drivers).

I wish I could get a package deal with my annual bus pass…a little uninsured driver insurance (as a pedestrian transit rider/ bicyclist)…a little Zipcar use…and a bike tune up.

Marcus (#7) – If it’s a federal law, they’ll follow it – because otherwise, it jeopardizes their federal funding. That’s the best part about this. Local law enforcement can be selective about enforcing local laws, and possibly state, but going against the feds puts the sacred cash cow at risk.

It’s important that this legal standard follow the currently existing legal framework for bicycles in every state; that bicycles are vehicles, and their drivers are recognized as having the same rights and responsibilities as other vehicle drivers. Therefore,
1)Roadways must be designed with bicycles as intended users, included in design considerations.
2) All roadway users are responsible for taking all necessary precautions to avoid collisions, especially when overtaking and yielding the right of way.
3)Any federally funded Inter-modal transportation facilities (buses, trains, ferries, terminals)will include accommodation for all modes of transportation.
Any separate definition and consideration for bicycles will ultimately lead to disenfranchisement. Be careful what you ask for.
And ultimately, wouldn’t you prefer to have well-maintained 14-foot wide lanes everywhere than a few bike paths that don’t go where you need to go?

Vote Up0Vote Down  Reply
« Sec. LaHood: “You have a full partner at the US DOT”
Citizen advocate works to improve calm on Lincoln bike boulevard »