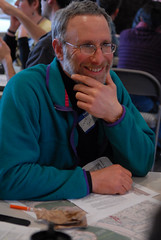 Frank Selker, the man with the mountain bike plan for Forest Park, is just 20 people shy of his goal to get 100 new, mountain-bike loving Portlanders to join the Forest Park Conservancy (FPC).

When we checked in with Frank last month, he was halfway to his goal. Today, he emailed to tell us that he just got the latest membership numbers from January. “I believe we are up to 80 cyclists,” he wrote, “and close to $6,000 in contributions to the FPC.”

Back in December, Selker challenged the community to step up and join the FPC — a non-profit group that works closely with the Parks Bureau as stewards of the park — in an effort to make a statement that it was time to move forward with talks about opening up more space for bikes in the 5,000 acre park. Currently, there is just 1/3 of a mile of trail that is legal for bikes to ride on (bikes are allowed on all the park’s larger, fire access roads).

Selker said if 100 people joined the FPC, he would make a personal contribution of $500. Since then, Sellwood Cycle Repair has agreed to raffle off a brand new bike once the goal is reached.

Selker’s efforts have already been noticed by the Portland Parks Bureau and he’s looking forward to a meeting with Parks Commissioner Nick Fish in the coming weeks to discuss the issue.

To join the Forest Park Conservancy on behalf of this effort, simply become a member at the $35 level and put “cyclist” in the “in honor of” field.

Does anyone know roughly how many members of Forest Park Conservancy there are overall? I.e., I’m wondering what percent of members 100 cyclists makes. Thanks!

The FPC had roughly 1,500 members before this push and some of those are also cyclists. But new members are special – if the average member renews for 5 years (a number I’m pulling out of thin air) then there would be only 300 new members in a typical year, so in this year cyclists would be 1/3 of them.

My goal has never been to have cyclists drown out anyone, but to support them with $ and work and to become a valued voice at the table. We were not that in the past, but we are well on our way to that now. Perhaps a FPC person can add more precision to my numbers and remarks on this…

I just joined, add another to the tally!
See you at the trail building days….

I would love to see Frank reach is goal! I joined back in Dec. The FPC is having a Volunteer Work Party Saturday. if you do not have the cash to join action speaks loud too.
I look forward to hearing the final results.

Just joined as well, thanks for keeping us up to date on this Jonathan!

thanks for the reminder, just joined!

Good luck to all, let me get this straight, out of 1500 members, not even 100 of those are dedicated cyclists. Based just upon those numbers, do you think an organization is going to put much effort into interests of less than 10% of their membership? is this community not able to put together an organization that honors the interests of their members? your only chance in this organization is to have enough cyclists that you control the voting process, without it you’re lost. HIKERS WILL NOT PROTECT THE RIGHTS OF CYCLISTS! don’t be fooled! I’m riding elsewhere…
Good luck, I hope I’m wrong…but I don’t think so.

This time last year my boyfriend and I took a cross-country trip to find our new home. We love to commute by bike and our passion is good single track. We are happy to call Portland our new home and can’t wait to enjoy great single track in Forest Park. While we really enjoy hiking in Forest Park, we think it NEEDS single track for mountain biking. Thank you Frank Selker for taking a stand. BikePortland, add 2 more to the tally.

Anyone have suggestions for good single track near or in Portland?

thanks for keeping this issue in the forefront, jonathan.

First, some of those 1500 were already dedicated cyclists. Second, over 100 new cyclists represents far more than 10% of new members (see my previous post). Third, happily most hikers don’t hate cyclists and vice versa. I don’t expect cyclists to control a voting process – in fact the FPC alone doesn’t get to decide what happens – what I expect is that we earn an opportunity to share ideas to be judged on their merrit and on our willingness to support the park.

Thanks so much for your work, Frank!
Please count one more member,
in honor of Brett Jarolimek- cyclist
So many of us met him in Forest Park.

I just signed up for the Forest Park Conservancy in honor of John Finley Scott, and will ask MTB buddies to do the same. DONE.

As someone that has really cut back on cycling and taken up hiking, that park is huge and the walking trails are awesome! Amazed at how busy they are even way out north. Everytime I wander into that park I amazed at the amount of land and the beautiful varied terrain.

This winter noticed quite a few cyclists out on trails they should not have been on (wildwood, ridge). Wasn’t really an issue for me to jump off the trail and out of the way, but i can imagine some older couple with dogs etc, and the tranquility interrupted.

There is so much land out there I don’t see how building some nice single track would hurt anyone, or anything. And i would probably get my mtb working for sure to mix up the hiking.

I signed up today as a new FPC member. Great idea Frank. As a parent with 2 young kids it is a challenge for me to jump in a car and spend 2 hours driving to get some R&R on my MTB. I can’t wait until a good single track ride is a reality in Forest Park.