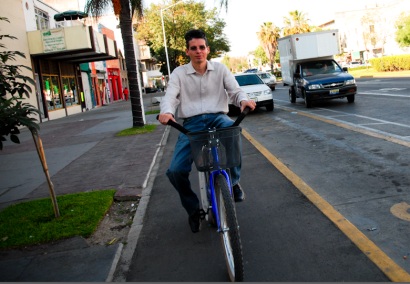 Guadalajara’s first cycle track runs for 5km on each side of Avenida Federalismo.
(Photos © J. Maus) 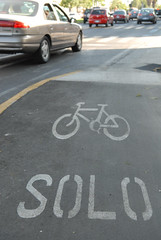 Portland might be getting excited for its first-ever cycle track due on NE Cully Blvd. in 2010, but here in Guadalajara, riders are already enjoying theirs.

Today, I got a tour of a recently completed cycle track (they call them “ciclovias” which translates into bikeways and is not to be confused with the carfree street event in Bogota, Colombia) on Avenida Federalismo. When finished, this cycle track will run for 5 km on both sides of Av. Federalismo.

This is just one project in Guadalajara’s “Mobilidad Urbana” campaign, an aggressive new program to promote non-motorized transportation. 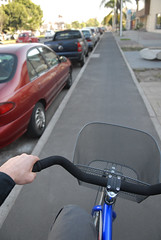 This photo gives you
an idea of how wide it is.

My first impression of the cycle track was one of excitement. Here I was, in a city where only 2.2% of the residents go by bike and where cars, buses, and taxis absolutely dominate the public space — yet now there is an oasis for bikes. In Portland, we have 6-8% bike use and we are thought of as a very bike-friendly city, yet we still have no concrete plans for a cycle track in our urban core (although one could be announced any day now).

Once on the ciclovia (we got on it just past the “Cycle Walk” public art installation), I appreciated the black asphalt surface material. This makes a nice, visual barrier to separate it from the white concrete pedestrian space. 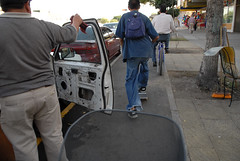 This skateboarder and the
man in this truck must not yet
know what this cycle track is.

The width — about 4-5 feet — felt a bit narrow and I spoke about the issue with my guide Ricardo (I will update with his full name when I track it down — my apologies). Ricardo is in charge of all policy regarding non-motorized transportation in Guadalajara. I shared a concern that the door zone would go about 60% into the cycle track. Further down the lane, Ricardo pointed out their solution; large reflector bumps set about one foot from the curb. This gives a bit of buffer space between parked cars and bikes on the cycle track (a good solution, but keeping it free of litter and debris might be difficult).

If you’re curious, Portland’s plans for the Cully Blvd. cycle track call for a 6-foot bike lane with a 2.5-foot “painted buffer” from the curb to accomodate the door zone.

It didn’t take more than half a block before we encountered the door zone problem. Two men in a truck could have cared less about our presence as they kept about their business — door ajar the whole time. This shows the challenge Guadalajara will have in educating people to respect the new bikeway. 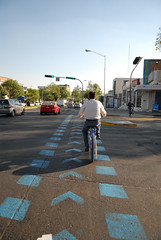 These are new markings
that help identify the bikeway
through the intersection.

The intersection transitions were a simple ramp that dumps the cycle track into the main roadway. At all crossings (driveways and streets), they have painted a series of blue hash marks to mark the cycle track.

Overall, this is a very exciting project for Guadalajara. Once complete, it will be the first place in the city where bikes can travel on a main thoroughfare unmolested — except of course for open car doors, intersections, parked cars, and the occasional skateboarder. But hopefully, a bit of education, consideration, and precaución will take care of all that.

My suggestion to Ricardo was to have a big party when the entire cycle track is competed. Una fiesta de ciclovia!

— For more cycle track photos and the latest images from my Guadalajara adventures, browse the photo gallery.

J.
Explain to me so I can have a better picture of the difference between cycletrack and bikelane?

of course Jim. It would be my pleasure.

A cycle track is a lane that is separated from other traffic. It is only for bikes and is at a different grade/level than the motor vehicle lane.

Someone from Harvard was on the APBP listserve today with a definition for a “cycletrack” for a paper they are writing.

Their definition was quite different than yours. I would look into it if I were you.

Are you on the apbp listserve?

Oh man, Portland’s got to be embarassed by this one. Guadalajara has a cycle track first? Wtf.

It looks dangerous to me. Besides the problems with pedestrians and dooring, how is a car making a right turn (especially into a driveway or alley) supposed to see cyclists behind all of those parked cars? It might be fine for extremely slow cyclist (under 10 mph), but I know I wouldn’t want to risk my life riding there.

Robert… I don’t think there’s a flaw in what you said.

The key difference is that sidewalks are not “only for bikes” as cycletracks are.

Can you post the definition you are referring to from APBP? …or direct me where to find it?
Thanks

ack… I wish I could edit a post after I made it. Here’s what it should have said:

Robert… I think there’s a flaw in what you said.

The key difference is that sidewalks are not “only for bikes” as cycletracks are.

Can you post the definition you are referring to from APBP? …or direct me where to find it?
Thanks

Only thing to be concerned about is kidnapping and beheading!

“Their definition was quite different than yours. I would look into it if I were you.”

robert. thanks. I’m not a professional but I play one on the Internet.

Cycle tracks are different depending on who you ask. NYC calls their Grand Ave. path a cycle track… but it’s not on a separate grade, etc…

and no, I am not on the APBP listserv. It is not free and I haven’t paid for a subscription yet.

and then Mike Quiqley wrote:

“Only thing to be concerned about is kidnapping and beheading!”

Mike. Have you ever been to Guadalajara? I have found it to be very safe and the people are quite fantastic and friendly in many ways. It’s a bit insulting to assume someone will be kidnapped or the victim of violence. I think Portland has much to envy in Guadalajara.

Is Guadalajara a good place for retirement?

really though, I’m not so sure about retirement. I assume it would be great. but it is a city. 2 million cars. today we are going to tapalpa.. 2 hours away in the mountains. there is also Lake Chapala 40 min. drive away. it’s a beautiful place!

we can all learn if we just open our hearts. this allows the mind to open up!

cool story thanks for sharing, after a hard
week of auto dodging. almost got killed the
other day! still a battle some days.. why?

It did not work.

I’d go out of my way to avoid that cycle track, unless there were no other options. The pictures alone are creepin’ me out!

from the pictures it looks like the locals are using it as a second sidewalk. Still though it looks like a much safer place to ride than in the traffic. Are there a lot of children using the cycletrack?

See here for a previous discussion about cycle tracks. The negative points raised there are not answered in Jonathan’s article. E.g., how does the street sweeper get to the cycle path? A cycle path will become automatically a mandatory side path under Oregon law, no matter how much debris accumulates on it. How do you make a left turn from the thing?

Left turn? Every intersection it would have to be at street level to cross the intersection, then I would assume you just turn onto the xing track or traffic lane. Street sweeper will be attached to a bicycle powered by a troll named jim. Seriously though- our sidewalks don’t need streetsweepers, why would a cycle track need sweepers?

Mr, Maus,
I Live in another paradise: La Paz Baja California Sur and I am thinking about do a project and give this for the local goverment about bike cycle track.
Do you know if there is some Portland folks or NGO to help me whit this dream?

The sidepath law is only going to go away after someone who dies family sues the city.

A straight thru lane on the right side of a right turn lane….. BRILLIANT.

Even after people die….few actually *get it*

I myself have rode this ciclovia. I don’t really like it because it is pretty much a side walk. It is too narrow and there is a curb. I rode on this bike path with the mayor and about a couple hundred other people when they were building it. I prefer the rode and put my trust in the drivers even though there are some crazy drivers out there. I just don’t find it comfy. Bicyclist are a part of traffic and should be respected more instead of turning to a side walk “made for bikes” to make us feel safer. I rode my bicycle throughout Mexico and Guatemala and it was an amazing experience. The pollution is 10 times worse than the crazy cars. I think they should work more on the pollution crises while bicyclist and drivers alike can focus on being more safer while on the rode.

We had a great time using this Ciclovia. It is a crucial connection to the North of town. One thing that we did notice both on the Ciclovia & at the “Sunday Parkways” style ViaRecreativa is the city’s great embrace of skateboarding and rollerblading for recreation and transportation. I think many, especially young, Tapatios would argue that the skateboarder in the picture is using the Ciclovia as intended. Bicycling and skating infrastructure can coexist.