“The bike community is very happy with the result.”
— James Koski, Deputy Chief of Staff for Earl Blumenauer

The Transportation Enhancements (TE) program is an important pot of cash doled out by the Federal Highway Administration that states can put toward bicycle and pedestrian projects. In Portland, TE funds have helped us create such popular bikeways as the Eastbank Esplanade, parts of the Springwater Corridor Trail, and the Fanno Creek Trail (in Tigard).

During negotiations on the recently passed federal economic stimulus, many national bike advocacy groups were very concerned that TE funding would not be part of the package. The League of American Bicyclists sent out a national action alert urging members to notify their representative in the U.S. Senate to make sure the program made it through.

Thankfully, now comes word that the TE program made it through Capitol Hill nicely. According to Kevin Mills, the VP of Policy for the Rails-to-Trails Conservancy, the stimulus bill includes a 3% set-aside of the entire $27.5 billion. That’s about $825 million out of the total infrastructure pot (which equates to about one years worth of typical TE funding).

In an email, Mills wrote, “This is an important accomplishment and opportunity, especially considering that we started with no funding.” But, he warns that challenges lie ahead in transportation funding re-authorization negotiations. “Particularly in the Senate,” he wrote, “where we failed to get TE explicitly included in their bill.” 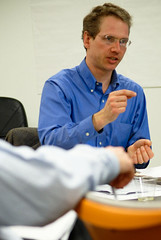 Kevin Mills with RTC is pleased
with how TE funding fared.

Mills also shared some other pieces of the stimulus bill pie that could go toward bike projects: $170 million for “Park roads and parkways” and $1.5 billion for the “multi-modal discretionary fund.”

The amount of TE funding in the stimulus is a solid victory for non-motorized transportation advocates. Marianne Fowler is Sr. VP of Federal Relations for the Rails to Trails Conservancy. She wrote in an email today that, “All things considered, we’ve done well. We can do a whole lot of good with an extra shot of resources like this.” Fowler writes that they will now focus on reaching out to communities to make sure they spend the money quickly (on good projects of course).

In past years, Oregon has sent back over $30 million in TE funds that were not allocated in time.

Shame on congress. They are all voting party lines. There is no honer or valor in their votes. Pelosi wants it final before the weekend so she can go on her vacation, republicans did not cross the line at all, there was no time to actually read the bill to see whats in it. Kudos for Peter Defazio who did cross the party line and vote his conscience

Congratulations to congressional democrats for voting for this bill! Hopefully we will get some very worthwhile projects out of this. To people like jim, I am sad he thinks spending our money on projects that benefit us is a bad thing. By the way, Defazio voted against it because he didn’t think it was enough money! Republicans are betting their political future on wanting us to go into the next great depression instead of trying to do anything positive, so I hope Obama will get over the bi-partisan thing and just do what will benefit the most people. I look forward to more bicycle based infrastructure projects.

Another victory for special interests and lobbyists!

Even Dianne Feinstein was against the bill but caved in under pressure and voted for it. it needed a lot more work and was pushed through too fast. It needed to be diasected with a scalpel first but the guy who is supposed to be good at that stuf failed us

jim, you are right, it was pushed through too fast. The problem is, the Bush administration was so asleep at the wheel, this economic meltdown was happening and they did nothing! If you think things are going south now, just wait until unemployment goes up a few more points! The spending bill ( and it is one) is about the only thing which might turn things around. It is easy to nitpick or do nothing (as the republicans are doing), but Obama is trying to do something! I think a lot of the money spent on infrastructure, especially funding for bicycle projects will be money well spent and will benefit all of us in the long run.

I think Obama is probably a good guy surounded by sharks. I hope he does well with the tough situation he has to deal with. None of us know what effect the stimulas plan will have until it is tried. we all need to remember that we have resolve and can come out of this. The govt needs to work with us and not tie our hands in ways that will be detrimental and unprosperous. The Bush admin failed us and I don’t even want to look back at it right now, it’s too paainful to think about. Let’s do pay attention to what they are doing now though. It’s still the same monster with a different head sticking up.

3% of the TE package is actually kind of impressive. Realistically I don’t see how we could have hoped for more. I just hope the state doesn’t spend it foolishly.

“I just hope the state doesn’t spend it foolishly.”

I just hope the state spends it.

Both of my Senators are Repugnican, I didn’t even bother trying to contact them. I’m glad my cohorts who live in states with real representatives and Senators contacted theirs and got the bill through. I just did my taxes for 2008, we are living on $12k+/-/year. Tell me again what good tax cuts are going to do for me.

Pelosi said we would have 48 hrs to read the bill before it was voted on. It was posted at midnight and voted on at 7:00 AM. Totally screwy